So the pair that we think are two females have just spawned again. Last week I started feeding bug bites, adding 2 sponge filters, and did a big water change yesterday.

I guess they approved because last night before lights out I saw they had laid a big batch of eggs. This time seems different though.

It’s been 24 hours and they haven’t eaten them. Some are white as expected but more than half have turned an amber color. They’re chasing everything away including the corys which they’ve not done before.

Don’t know that I’ll know for sure that one is male though because I’m going to let nature take it’s course so I don’t expect any eggs to remain after lights out.

The one near the eggs is female, the white one is the mystery sex. It’s papilla was bigger earlier but I didn’t get a pic. Regardless of male or female it’s fun to watch their behavior changes as they mature. 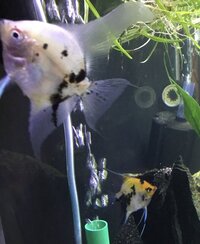 It should be pretty easy to tell gender when theyve just spawned, as their breeding tubes are fully extended.

Have you looked at pics of the difference between each genders tube?

Edit Never mind!! You edited your post to add more while I was responding.

OMG, I just got so excited. I glanced into the tank and thought I finally caught sight of the mystery papilla and it was HUGE and definitely male.

I ran to get my iPad to take the pic. But then it hit me. I fed the cory’s shrimp pellets after lights out and this little pig must have chowed down. What I got a pic of was pink poop! 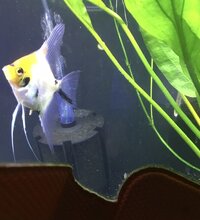 Congrats on the spawn, hope they do well for you

How To: Slow Down Current From A Filter