I had mentioned in another post that I ordered some fish for a planned 12 to 15 gallon tank I was working on. As I also mentioned in that thread the 12 gallon tank I had didn’t really work out and I ended up setting up an old 5 gallon I had lying around. Unfortunately I ordered more fish than can fit in the 5 gallon so I’m setting up another nano tank to house those fish. This tank will house Japanese rice fish, Japanese trapdoor snails, and Amano shrimp. Was thinking about doing only fish and plants native to Japan, but not sure I could pull that off so will stick with this for now.

Tank is a 6.6 gallon fluval chI replacement tank. Have a fluval planted nano light I will be throwing on it. Will throw in a simple sponge filter. Gonna try to Y my fluval CO2 system as to get CO2 in both my nano tanks.

Going for like a grouping of my hard scape and plant in the very center and leaving most the rest just substrate??? Though now that I look at it maybe hardscape in corner with branches hanging over, what y’all think? I’ve attached some pictures as ideas.

Thoughts??? Plant idea?? Was hoping for some y’all plants in the back and maybe Anubius nana in the upper branches? 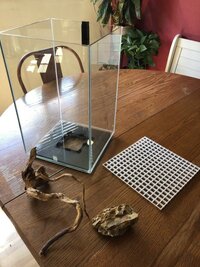 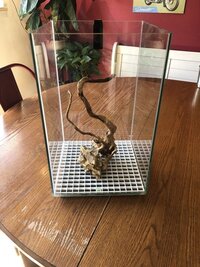 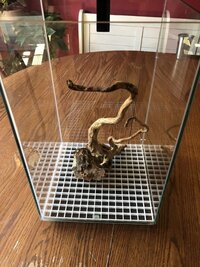 Following. I am interested to see how this project turns out.

Did a little work on this today. I scrapped my previous idea as I was having trouble getting it to look the way I wanted. I had some drift wood from my yard (think it’s pine based on smell when I cut it haha ) that I had previously boiled in anticipation of putting it in another tank. . . I’m much happier with this look. I’m going to have to cut the bottom egg crate a bit as I don’t want it to be visible when the substrate is in. Speaking of substrate I’m not entirely sure what I will use. Normally I gravitate towards black substrates as I feel they don’t look dirty/get dirty as easily, but I’d really like to try something lighter like a light sand gravel mix. . . Not sure though. I still haven’t decided on plants but realistically it’ll probably just be what’s available at my local fish store when the time comes to complete the build. 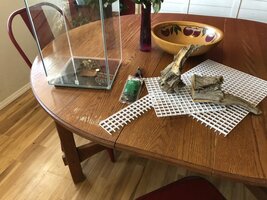 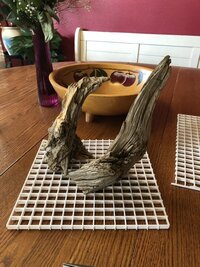 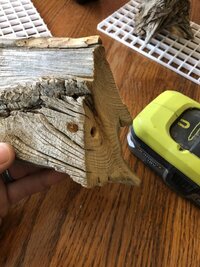 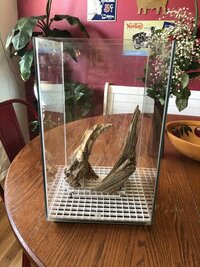 Was gonna silicone the light diffuser to the bottom, but it was getting kind of sloppy so I changed it up. Zip tied some suction cups on, should hold long enough for the wood to become waterlogged at which point it can hold itself down. Have some little bits of driftwood left I was thinking about adding for accents but could also leave as is and let the plants do the rest. 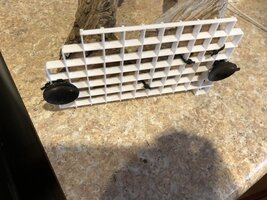 Alright, it’s pretty much finished. Didn’t really take a ton of photos like I had planned as I was a bit rushed getting this completed. A few things changed, initially I was going to use some crushed coral as I thought this would lower the pH, however, the folks at the local fish store informed me this would actually raise the pH. Instead I went with some aquarium sand and gravel and threw a couple root tabs in for good measure. I also added some spruce pinecone things, as the fish store told me this would help lower my pH. Got a few plants, mostly just looked good to me at the time but I think it turned out looking pretty good. . . Initially I was pretty confident in my idea to suction cup the driftwood to the bottom of the tank, now I’m just hoping that I don’t wake up to a totally wrecked tank with floating wood.

Still planning to put the rice fish I ordered in this tank. Unfortunately My order, and about 20 other boxes of fish got lost on the way to the store??? But I’m rethinking the amanos, probably to big. . . 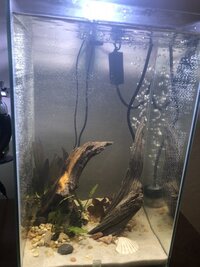 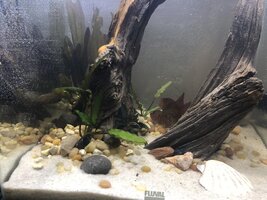 Also caught a stowaway, tried to get it out with the tweezers but it ended up getting lost in the sand. 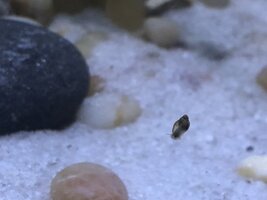 Oh yeah, and my idea of splitting the CO2 between the two tanks definitely didn’t work out. I could get one diffuser to work at a time but not both. . . Blew the diffusers off a couple times as well! Assume it just takes “a lot” of pressure to push the CO2 through and as it flows out of one the pressure drops and doesn’t have enough pressure to push out the other diffuser??

Made a make shift lid from some Home Depot glass. . . But what about those bubbles? Lots of bubbles on the surface that aren’t popping. Could the tannins be causing this, or is it indicative of some underlying issue? 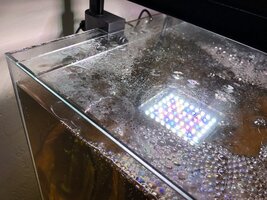 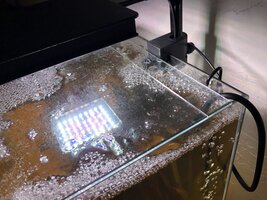 those bubbles looks like a bacteria build-up I had when I started a planted tank not too long ago. Only knew what it was from a youtube vid. I'll post the link here

New critters in the tank. . . Also I may have messed up!

As I mentioned above I suspect the wood in this tank is pine, due to its smell when I cut into it. Initially I thought this was no big deal as I did what the Internet instructed as far as adding naturally sourced driftwood. Now this Driftwood isn’t exactly naturally sourced, it was a piece of decorative driftwood from my front yard. I assume it is pretty old, plus it sits outside in the element including snow in winter and 100 degree days in summer. I though it’s natural exposure plus the fact that I boiled it for an hour would render it safe. . . After some more reading however It seems the concern with pine is the sap, and per some sources if the wood is at all aromatic it still contains sap and is not safe. Now just sitting there it doesn’t have a smell, but when I cut it it did, and it has lended a slight pine smell to the water which I noticed when doing a water change before adding the fish. Now if I hadn’t gone to such great lengths to attach this to the bottom I could just easily remove the wood, however at this point removing the wood would pretty much uproot all of the plants and destroy the entire scape. I’ve read some anecdotes of people using pine without harming the fish, but I still worry. What do you guys think???

Also the fish I added were 3 sparking Gourami. But the are hiding. . . Hopefully stressed from the move not the pine/water.

Should I add some activated charcoal? Would that even do anything?

(Also not sure if tan coloration is from the wood or the alder cones). 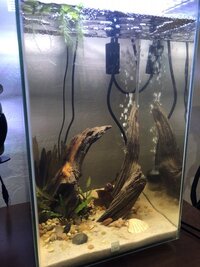 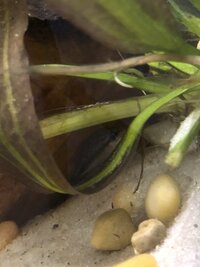 Decided I didn’t want to risk the pine killing my fish/always worrying about it killing them so I ripped it all down. . . But we can rebuild it. 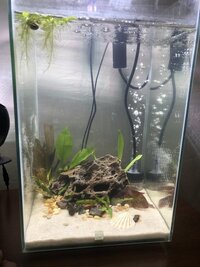 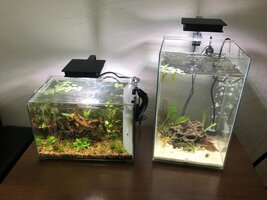 Did a little work on this today. I scrapped my previous idea as I was having trouble getting it to look the way I wanted. I had some drift wood from my yard (think it’s pine based on smell when I cut it haha ) that I had previously boiled in anticipation of putting it in another tank. . . I’m much happier with this look. I’m going to have to cut the bottom egg crate a bit as I don’t want it to be visible when the substrate is in. Speaking of substrate I’m not entirely sure what I will use. Normally I gravitate towards black substrates as I feel they don’t look dirty/get dirty as easily, but I’d really like to try something lighter like a light sand gravel mix. . . Not sure though. I still haven’t decided on plants but realistically it’ll probably just be what’s available at my local fish store when the time comes to complete the build.

Hi, what is the purpose of the grid in the bottom of the tank? I haven't seen that before.
Thanks

I was doing it to hold down the Driftwood, as it wasn’t completely waterlogged and would float. That and the way I wanted them position they likely would’ve fallen over under their own weight so I wanted to ensure they stayed exactly where I wanted them. Though you can use the grid (egg crate light diffuser) for other stuff/build other structures I’m sure. Initially I was going to use the grid also to keep a more plant friendly substrate strictly in the middle so you couldn’t see it from the outside of the tank but I ended up scrapping that idea in favor of root tabs.

Oh I also used it in my bigger tank, I attached it to the bottom of new drift wood that I knew would float and set heavy rocks on the grid to weigh it down the just hid the grid and parts of the rock with substrate. 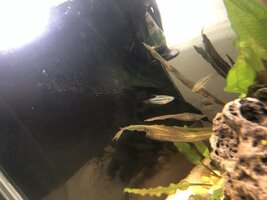 Ended up adding the endler trio (was sent an extra female. . . but she’s extra tiny and now I can’t find her in the tank though) didn’t really have anywhere else to put them ATM. I think they work well in here though and the gouramis are more active with the endlers swimming around. Not sure there’s enough cover in here to shelter fry from the gourami, but we’ll see. 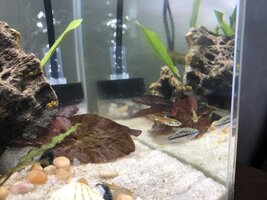 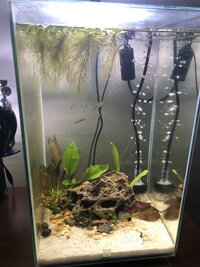 Also the red sword and lotus don’t seem to be growing so I added some root tab shards right at the bases of the plants (already 2 full tabs somewhere under the substrate). The water lettuce is browning, likely due to water droplets getting on the leaves. May replace with duckweed but I’d rather have something with longer roots???

Also also sand is a pain to clean!