Anenome is shrinking - not good.

Hey guys, I got myself a malu anenome this week and he seems to be a bit sad - he's open but definitely shrinking. Help!

OK ... Check water par's first ...
Is it shrinking with lights off, low or high. Mine shrinks when the lights are off.
I think you have a sebae, right ? He need lots of light ...! Have you feed him anything yet ?

I've noticed he's shrinkled up day and night - not just at a certain time. He has settled just out of the direct light but still has enough good light reaching him. He's a purple tipped malu anemone.

I fed some shrimp to him and he ate it yesterday.
This morning I cannot tell if he is upside down or the right way up - he seems to have something protruding both ends! Looks like he has 2 feet basically.. :-[

Oh my ammonia, nitrates and nitrites are all 0. They were before I bought him and I just checked again - they're fine. The only thing that has changed is the tank got a bit colder the last 2 nights cos I left a window open - it was at 22 degree this morning rather than the usual 24.
I've just looked it him again and he seems to have filled up soe of his tentacles again - I read that it's quite normal for them to change shape and shrink and inflate again after first being introduced into a tank so I'm hoping that he's just getting used it it.
Will keep you updated!

Yes, all quite normal. Post a picture if you can. Feed him a little each day until he gets use to his new home.

Thanks I have just got home and he looks better - he has replanted his foot in the sand and he's fully open again. Maybe he just had a bad morning ;D

I hope he continues to do better!

They also deflate when they have to poo ! They inflate when hungry. If the mouth hangs open ... he sick. If he's loosing color (like mine), he
needs more light. (mine is very bleached ... it was a rescue purchase)

:'( This morning he's almost all gone! He is normal colour - just hardly any tentacles - he seems to have sucked them all in.
I have been watching thinking maybe a fish or crab is bothering him but I haven't noticed any of them harrassing him. I'm hoping he will come out again now that the light is on.

Mine will completely disappear between the rocks during the day, when the lights are off. It is very normal ... What kind of clown do you have again ?

No I mean he has all shrivelled up - he has been better since the lights came back on but he's still little and ill looking. Do you think I should put him in QT tank incase he dies? Save me doing a lot of water changes etc

Look at my anemone photos in my tank photo thread ... See if your looks like the second photo. Can you take a photo of yours ?

He is what we in the states call a Sebae Anemone (Heteractis crispa). Are his tentacles falling off ?

ok won't move him then - this is the pic of him today - I switched off the light just to get a better pic of him because he doesn't show up with the light so bright on the white sand. To give you an indication, when I first got him I think he was about 9 or 10 cm's across and now he's about 5 cm's across.

Yes he ate some flakes and shrimp the last 2 days. I am going to get him some fresh shrimp and muscles today when I get my RO water.

I just checked salinity - it's up to 1.028/38. I think this is because of the increased evaporation since having my new light.
Do you think it could be why he is sick?

That's a shame - well hopefully if I just keep in eating and keep him stable he'll come out of it.
I'm hoping the RO water will help him out a little more because I've been using tap water.

Yes ... it's could be another. My tank has been losing about a gallon a day this week. (it been hot here)

OOOH that's a lot!! At least it's cold here but I do hate the cold >
Well I'll keep you updated - thanks for your help Ag

Yes get some RO top-up water. Our tap water is very bad here.
Here is what mine looked like. 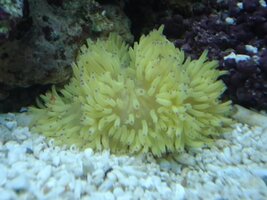 He only lasted 4 days. My tank was only 6 weeks old at the time.

Hope he gets better ... Talk to you later Ursula ..

Morning Andy!
Today he is a transformed anemone! He is looking really happy and healthy, fully open, all tentacles full. I think the water change and some fresh prawn helped him a lot. I'm SO relieved

Thanks for all your help and support - speak soon

That's good news ! He just needs to settle in to his new home. I also found out anemones live over 100 years old. Keep us posted on his progress.

Islandvic has a nice DIY write up on media for HOB filters:
Diy Media Guide For Top Fin Silenstream, Aquaclear And Other Hob Filters