Okay, so I was leaving church on Sunday and right across the street there was a yard sale. Since I've been meaning to upgrade Amun's tank ASAP, I decided to stop by and see ifthey hadanything. Wouldn't you know it they had an awesome about 8 gallon flatback hex tank with a hood, gravel, fake plants, an air pump, a sponge filter and some miscellaneous air tubing. So, I asked how much they wanted for it since nothing was marked, and since they were closing everything down, they gave me the tank (with accessories), a box of extra stuff, and a bag of extra stuff too...all for $5! 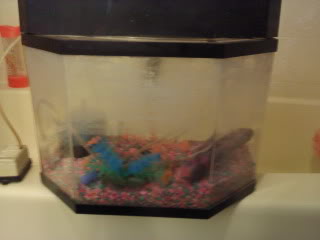 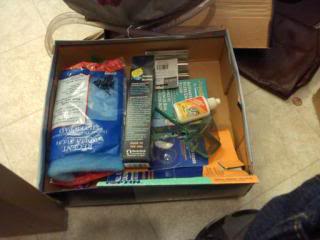 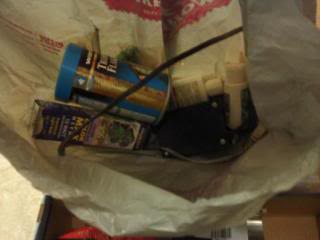 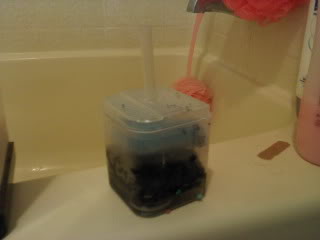 The hood needs a tiny bit of repair (somehow whoever had it managed to melt the mounts on one of the reflectors), but other than that, it's in pretty good shape. So, now I've got it cleaned and the "clown puke" gravel and neon-colored fake plants tossed (along with the undergravel filter that will be useful since I use sand in my tanks)...and I'm sitting here staring at it trying to decide what to do with it a far as decorations and a theme go. I generally like natural-looking tanks. I have a lot of driftwood soaking (I keep a bucketful of it in my shed just in case), natural river rocks, and I have tons of plants on the way from a friend, so I could go the natural planted tank/grotto look. Or, since Amun's name is Egyptian (it means "the hidden one" or "the secret one") and Amun/Amun Re was the principle diety of the New Kingdom of Egypt, I could make it look kind of Egyptian. I was thinking I went this route, I could make a pyramid from styrofoam coated with silicone and sand and maybe scatter some pieces of granite. I also have white butcher paper I can draw/paint Egytian symbols and hieroglyphs on.

So, I would like thougts, ideas, input, anythng you want to give me!

I'd love to see a Egyptian themed tank! For some reason making my own decorations never occured to me, but the description of diy pyramid has me thinking....

What would you do for plants in an Egypt theme?... though Egypt was a fertile region long ago.... some 2500-3000 or more years back anyway

Wish I could find deals that good! the local version of 'craigslist' (usedwherever) seems to have a lot of greedy people who know that MTS obsessed people are unable to turn down more tanks even if they are overpriced! lol
D

What a fantastic find
I love the sound of the Egyptian theme.
Perhaps you could weight the styrafoam and hollow it out a bit and have like a little entrance for him, of course it would have to depend on the size you want it or if you are very crafty you could make a little sphinx
I do not know what kinds of plants are good with bettas or even what different aquarium plants are out there but Ferns are actually quite common in egypt so if you could find something similar it would keep the theme alive and lotus flowers would be a gorgeous attraction as well.
I can't wait to see what Amun's tank will look like =D
OP

The tank is big enough that I could do the pyramid big enough that Amun could get into it. That'd actually be pretty cool. I'll probably be making it from scraps of packing styrofoam I have from a printer box anyway, so I could build it hollow and weight it down with rocks (have PLENTY of those!).

As far as plants, I have the sword plant from Amun's current tank (think palm tree) and I have quite a few hygros coming from my friend who is sending me plants (again, think palm trees). It'd be nice if there was a truly aquatic plant that was grass-like (other than corkscrew val and the like...I do have some dwarf sag I could use, I guess). I was also thinking of getting a lily bulb (like they sell at Walmart).

If I can find some columns (not the double columns I have in Emmett's Hex5, but a row of three or four columns), I could do like a ruined temple on one side of the tank, too.
D

Sounds awesome, I'll be sure to keep a look out for the pics

What a great deal! I'm useless with themes, but this Egyptian theme has me intrigued, I hope you do go with this, I would love to see pics of the finished article!

Congratulations on the new tank!

We're working on an Egyptian-themed tank ourselves.

I found a sphynx at Petsmart. It's "betta-sized". Also, white gravel gives the tank a "sandy" look.

Hopefully, I'll be posting pics tonight if my camera is fixed.
OP

I've had white gravel before and I absolutely hated it. It looked great for the first week and then it just got SO dirty, even with regular water changes and vacuuming the gravel every time I changed the water.

I'm going to look for a sphynx at thrift stores for something that will be big enough that it won't get lost in the tank. It's actually a fairly big tank, only a little bit smaller than a regular 10gal, so a small statue or ornament would get lost in the tank, especially with how big the pyramid is going to be. I'm also going to check Hobby Lobby for styrofoam (maybe even a styrofoam pyramid that I can hollow out) so it'll look more even and won't be as much work.

I'll post pics in this thread of the stages as I set up the tank. The longest wait will probably be for the plants to get here. My friend mailed them two days ago, but they're coming all the way from Florida, so it'll be about a week or so before they get here.

I've seen a plant that kind of looks like spiky grass a time or two at petsmart... couldn't tell you what it was called, but from the description it doesn't get more then an inch or two high... and I know I've seen a sphynx ornament somewhere too.....(at one of the many pet shops I frequent)

good luck finding all this stuff, I can't wait to see the finished result! ...and now I want another tank so I can try out a theme tank too! curse you!!!!

Hey, I wanted to say I fount some egyptian style decor at petsmart last week. They had a pyramid and a sphinx statue. Just a thought. But that has to be the deal of the year lol. Congrats!

*Edit, lol Shine I think it might of been petsmart XD*

ha ha! Furallicah--it probably was, but when you sometimes stop at 3 diff pet shops in one afternoon, you tend to forget where you spotted a specific item... except the plants, I only get those from one place, so its easier to remember
OP

I have some micro sword in my 55gal that I might steal and I also have some dwarf sag in Amun's current tank and in one of my divided 10gals that I can pirate as well . I'm also getting some blyxa japonica from my friend, which is similar to the dwarf sag that'll work wonderfully.

Right now I've got the sand rinsing and glued the reflector back into the hood. This is VERY exciting!

I'll have to check Petsmart. I live in a really small town and I've noticed that our stores don't always carry a lot of the stuff that the stores in the bigger cities do.

Shine said:
ha ha! Furallicah--it probably was, but when you sometimes stop at 3 diff pet shops in one afternoon, you tend to forget where you spotted a specific item... except the plants, I only get those from one place, so its easier to remember
Click to expand...

I know! I once went to my new LFS that is only fish, reptiles, birds, and small mammals like hamsters. I went in and asked if they had dog food thinking I was in petsmart.... Lol somtimes I am so scattered Brained! lol. I like your thinking Bassbonediva. It sounds awesome! I can't wait to see pictures of the new set up.
OP

And wouldn't you know it...I look online to see what's out there and find EXACTLY what I want! But, I unfortunately can't order anything online (no checking account and my parents won't let me use theirs to order things off the internet). Grrrr!

This would be awesome too...in the back right corner, with the set of columns in the left corner/side.

bassbonediva said:
And wouldn't you know it...I look online to see what's out there and find EXACTLY what I want! But, I unfortunately can't order anything online (no checking account and my parents won't let me use theirs to order things off the internet). Grrrr!

This would be awesome too...in the back right corner, with the set of columns in the left corner/side.
Click to expand...

I know what you mean about not being able to order offline with out a banking account and your parents won't let you...it is maddining!
OP

Yep, it is! Which is why I usually look for stuff at thrift stores that are regular decorations (like for the house) that are non-toxic that I can use as decorations in the tanks. Anywho, I'm going to keep an eye out for something similar to those I linked.

Okay, barring any major hitches, I'm going to get this ornament for Amun's tank today. Saw it at Walmart last night and just LOVED it! I would have gotten it last night, but I had only brought a certain amount of money with me to get only what I needed, so I didn't have enough for this. 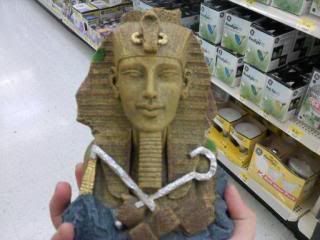