I’ve had a few shrimp deaths recently so did a water test today, only to find that it looks like there is ammonia in the tank. It’s reading at .25. I have no idea why there would be ammonia. The tank hasn’t had ammonia since it was cycled 9 months ago. It’s had shrimp for maybe six months. The only other occupants were a few molly fry which I removed over the weekend when I realized he was large enough to suck down baby shrimplets.

I think maybe some of the issue is buildup of waste under the gravel since i’m afraid to go crazy with the vacuum when there are tiny shrimp everywhere. The java moss is kinda new and doesn’t seem to be doing great, so maybe if that’s dying it could cause visible ammonia? I feed them barely anything, a shrimp pellet or some kale every few days.


Question: how big/how frequently is it safe to do water changes? I usually do 10% once or twice a week since I don’t want to shock them. I am thinking of doing 10% the next few days and using Prime.

Some people do 25-50% water changes for betta fin rot but one 25% chance is better than three 10% changes so I’d increase the amount you change but you definitely don’t have to do daily.

my tap gH/kH is nearly zero. I have limestone and oyster shells in the tank to add hardness, but any new water I add into the tank is very soft. I’m worried that doing too many or too large water changes will add too much stress. obviously if there’s ammonia I need to do something. I’m not sure the best way to do so while minimizing stress on my shrimp.

I just did about a 20% WC. I meant to do less, but once I got the vacuum in the back of the tank I realized how dirty it is. Ugh. I am guessing that’s why there is ammonia, but please if anyone knows where else substantial ammonia could be coming from let me know!

you could vacuum into a 5 gallon bucket. let it sit for 30 minutes or so, allowing the gunk to settle to the bottom, then scoop some of the old water back in.

Skavatar said:
you could vacuum into a 5 gallon bucket. let it sit for 30 minutes or so, allowing the gunk to settle to the bottom, then scoop some of the old water back in.
Click to expand...

That’s a good idea! or maybe using a stocking to filter out the gunk as I vacuum it, so it’s easier to add water back in.

I just found out why I see so many berried females and so few shrimplets growing (fat molly fry to blame), so i’m extra concerned about my shrimp now dying off.

I found four dead shrimp today and I am devastated. It looks like the ammonI test *could* be at .25, but it also looks like it could be at zero. I honestly hope it is ammonia. I don’t know what else could be killing them.

I did a bigger water change today. I’m going to slowly add new water in over the course of a few hours.

Sorry to hear about your shrimp
What kind of test kit are you using, strips or liquid? strips can be pretty unreliable and difficult to read. Dosing Prime every 24-48hrs could help detoxify while you work on water changes. 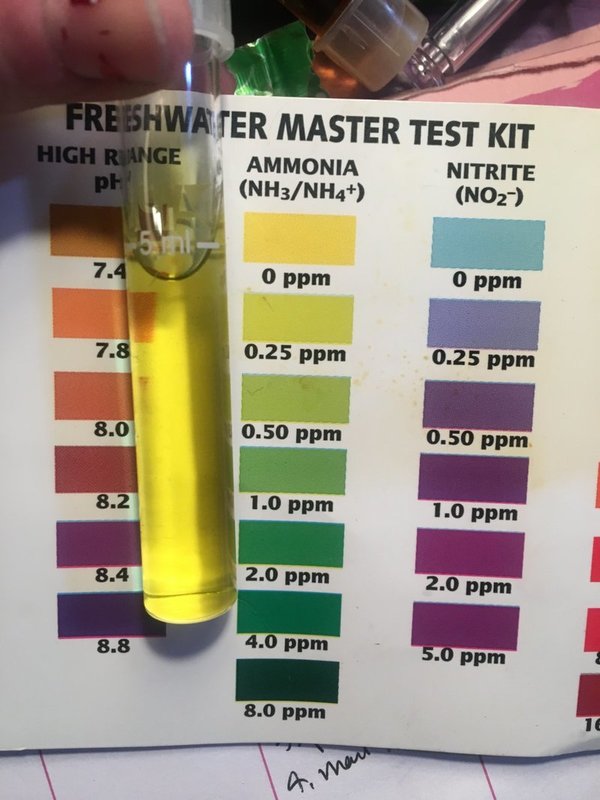 Otherwise, I don’t know what could be wrong. Shrimp are still active. There are many baby shrimplets. I see some moults laying around so I don’t think it’s a molting problem.

I dosed Prime yesterday and am dosing it during the water change today.

I've found another two dead. I'm so upset. I don't know what to do, if I can even do anything. I examined the bodies and nothing looks diseased but I barely know what that looks like

How many shrimp in the tank. Have the shrimp grown through the cycle. Ie shrimplet the adult? How long have you had the tank? Pictures help.

Just found another dead one. 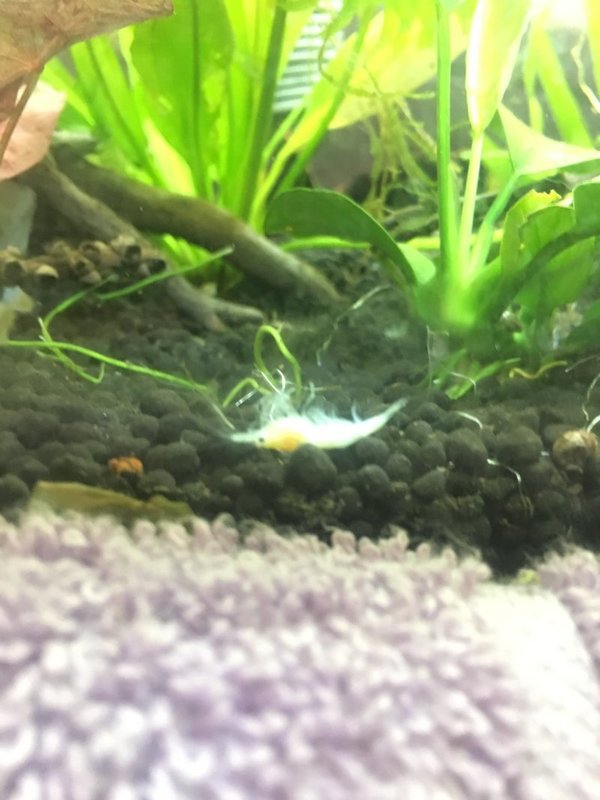 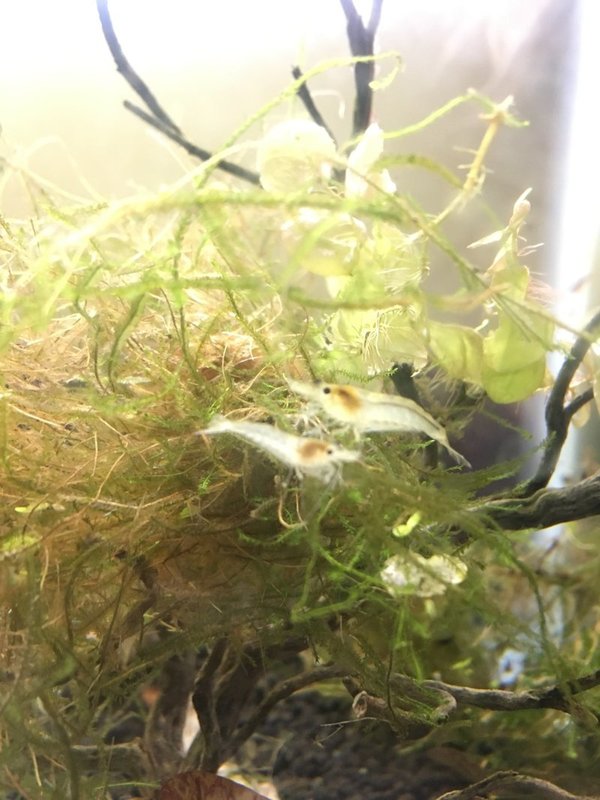 Here are some live ones.

there's one on his back in the tank. His legs are wiggling around but he doesn’t seem to be able to do anything.

To get into the gravel you can attach a small air line hose to a chopstick and siphon the substrate with that. It is tedious but it may help get it clean with much less risk of traumatizing baby shrimp.


Jellibeen said:
I've found another two dead. I'm so upset. I don't know what to do, if I can even do anything. I examined the bodies and nothing looks diseased but I barely know what that looks like
Click to expand...

Rachel O'Leary on YouTube has some good videos from when she gets in shipments of shrimp and shows the diseases/what to look for. I will leave a link that may help with some visuals of what to look for, but she has lots of videos on shrimp so not sure if this is the one I was thinking of or not.

Fish0n said:
To get into the gravel you can attach a small air line hose to a chopstick and siphon the substrate with that. It is tedious but it may help get it clean with much less risk of traumatizing baby shrimp.

Rachel O'Leary on YouTube has some good videos from when she gets in shipments of shrimp and shows the diseases/what to look for. I will leave a link that may help with some visuals of what to look for, but she has lots of videos on shrimp so not sure if this is the one I was thinking of or not.

Thank you! I am so worried I sucked up baby shrimp doing the water change today. I'm going to do that next time, for sure. I much prefer tedious over hurting my shrimplets.

Sorry I don’t have the answer. May be just natural causes. Are you finding dead shrimplets? I think shrimp must have a short lifespan. What are neo shrimp? I have cherrys.
Alot that I have read hear does not work for me. First I clean the tank weekly and do at least a 20% wc. My shrimp are dirty the floss is brown in a day. I feed my shrimp daily. I read hear feed twice a week and when I did that it seemed like they became canablistic. I would constantly see shrimp eating a shrimp. Went back to daily feedings and all is good again.
Your tank readings look good the ammonia looks like 0.

What is your temp? Sorry if I missed that part. In the summer when my house gets really too warm I tend to get deaths, a lot. If kept at no more than 76* ish, they thrive. I do maybe 20% once a week, sometimes 9 or 10 days before I get to it. I also have a ton of debris on the bottom but zero ammonia, I just cut back feedings, stir the gravel and they eat that for a few days. I too am worried about sucking up babies. Next time I will try what KimberlyG suggested on a different thread and use a shrimp net during water changes over a bucket, catch any babies and plop them back in. I’m always sucking up babies so I know what you mean. Sorry about your shrimp but like I said I had that happen too, now the weather has cooled and they won’t quit breeding. Haha.

I think it was a bacterial infection. I followed directions to treat the tank using hydrogen peroxide from Mark's Shrimp Tanks. I treated the tank last night, and so far no deaths compared to the six or seven I had just yesterday. The dirtiness of my tank made a perfect breeding ground for bad bacteria.

In case anyone is interested in the video I used to treat the tank, here it is. I am very glad I did some research and found his videos. I think he saved my shrimp.

I keep the tank at 72-74. Lower temps mean they live longer but breed less, like you said.

I guess now is the perfect time to make the move from the 10 gallon into the 15. Mark also suggested doing a total water change to get rid of bacteria. I've been procrastinating making the move, but I have the weekend off so it's time to fully set up the tank and start moving my shrimp over.

sidenote: before anyone tells me about only putting shrimp into mature tanks, I know. I will be moving everything except the gravel into the new tank so there will be plenty of algae and biofilm for my shrimp. I am moving the filter over and adding a second seasoned sponge filter for the first few weeks.

86 ssinit said:
What are neo shrimp? I have cherrys.
Click to expand...

Neo shrimp are short for neocardinia davidii, which are cherries. I say "neo" because I cannot remember the full name without looking it up haha. I shy away from saying "red cherry" cos mine are a motley crew of white snowball shrimp and random red ones that have bred their way back in.
You must log in or register to reply here.
Share:
Facebook Twitter Reddit Pinterest WhatsApp Email Link
Toggle Sidebar