Started a Fluval EVO 13.5G nanoTank last Sunday. 10lbs wet live rock from LFS, about 3/4 of a bag of Caribsea Reef Sand in the bottom.

Doing a fishless cycle - dosing pure ammonia (ACE Hardware - no soaps, no dyes, no scents). I put 40 drops of ammonia in the tank on Monday afternoon - ammonia went up to 4PPM on an API ammonia kit. Got the following readings through the week -

I thought it was weird that the ammonia was stalled, while nitrite was going off the scale. I dosed another 20 drops of ammonia this morning, and that brought ammonia levels back up to 4 on an API kit.

So here's the question - is the ammonia stall because something is dying off in/on the LR? Maybe that's adding more ammonia, as it's being processed into nitrite?

I was starting to think it was the API kit - that's why I started double checking with the Red Sea - both seemed to correlate though.

Thanks for the bump - there has been improvement in the last 48 hours ... IF you want to call algae developments "improvements" ... after the second dose of ammonia Sunday morning, I was back down to 0.5PPM on a API for ammonia this morning, while Nitrites dropped from 5 last night to 2 this morning, and Nitrates went from 20 to 160 overnight.

Since the ammonia was low, and I didn't want to starve off any bacteria, I dosed another 20 drops of ammonia this morning, I'm curious to see where I'm at when I check tests around 7pm tonight.

I'm encouraged by the ammonia/Nitrite drops and Nitrate explosion over night.

How long have you been dosing the ammonia? It might be time to stop and just let it finish out on it's own. I agree the nitrate explosion is a good sign as that usually happens towards the end of the cycle.
OP

20 drop went in the tank this morning Tuesday March 5, tested 4PPM after dose

I'll be testing for ammonia, nitrite and nitrate around 7pm tonight - will report back results.

I'm following the "Test and Wait" method - where you only re-dose ammonia after levels have dropped to near zero. I'm not dosing ammonia everyday. 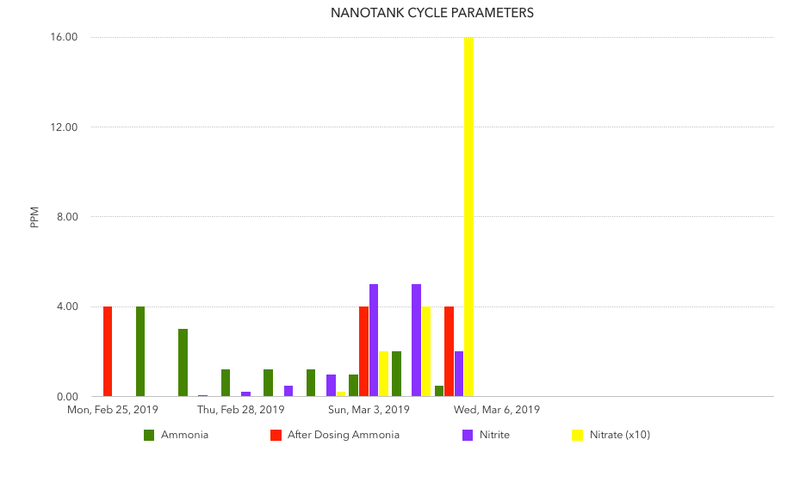 NITRATE Levels should be multiplied by 10x. If I put the real numbers in there it would blow out the scale and the other numbers wouldn't be readable.
OP

Keeping in mind that I dosed up to 4PPM on an API ammonia kit 12 hours ago ...