Member
So my tank is finally sorted out and my fish aren't dying. But I woke up to this today. My oldest cory (the one that's stuck with me through everything) is missing scales on a quarter of her body. It looks like her plates are still there, but you can see the muscles underneath. She's also missing a barbel. Her eye looks like it's still there, but it's been hurt too. My phone's camera's focus just makes it look like a pit. I've currently got her hospitalized with a small amount of aquarium salt and some tea tree oil. Dosed a tiny bit of prime too, but used the water from the aquarium, not a new batch. Her other side looks great, just like a cory should. I didn't notice this until she started swimming in spirals. At first I thought maybe she'd burned herself on the heater because it malfunctioned, but other fish are laying on the glass under it just fine. My best guess is that something attacked her in the night. I've heard of ghost shrimp eating betta tails. Would they be able to do something like this? My more plausible theory is that one of the plecos got a hold of her. Is this the kind of damage that can come from a pleco attack? Will it heal? I fully expect her to have a scar. Or would it be more humane to just put her down? 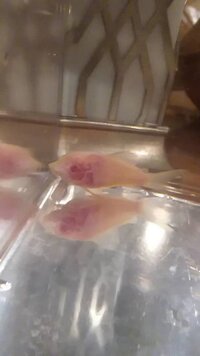 Member
I am sorry!! She looks so sad!! I don't have much experience with treating injuries like that... I hope someone can help you!!!

Member
I once had a cory that looked like like that on just one side. S(he) was fine for a few days, but it got to the point where s(he) would just do that wiggle in place movement and wouldn't necessarily move. I ended up euthanizes them because they must've been in a lot of pain. If your cory still does everything a cory normally does, I would try to give her some time. Regarding her barbel, I've found that new life spectrum sinking pellets helped regrow some of my cory's barbels and torn fins.

Member
Thank you both! She's trying her darndest to do cory stuff, but she can only do so much because of her injury. She's still swimming to the top for a gulp of air, and swimming some, but she's resting a lot. I don't blame her though. She still has that "will" to live though, and wants to keep on. </3

Member
Unfortunately she passed away this afternoon while I was mowing the lawn. Rest in peace Herp Fish. Now you can be with your best friend Derp Fish in cory heaven. </3

Jessiegrace said:
Thank you both! She's trying her darndest to do cory stuff, but she can only do so much because of her injury. She's still swimming to the top for a gulp of air, and swimming some, but she's resting a lot. I don't blame her though. She still has that "will" to live though, and wants to keep on. </3
Click to expand...

Just saw the update. Sorry about losing her She tried her best.

Member
Sorry for your loss...

As a FYI you will want to avoid salt with cories as it will irritate them more thus stressing them out more.

Member
Sorry you lost it

Member
Thank you all. And I will keep the salt in mind, though I hope I never have to deal with this again.

Member
BTW they don't have scales !

Member
So sorry you lost your little finbaby. Such a sad injury. You did what you could.

If you get some time read up on safe meds for corys. They are very salt sensitive and I don’t use anything that ends in fix with them. But you were only going on what you know. There’s lots of stuff right here on fishlore that’ll help you be better prepared. And yes a pleco can do that. One of my angelfish looked exactly like that according to my hubby. Best of luck.
Share:
Facebook Twitter Reddit Pinterest WhatsApp Email Link
Top Bottom