Member
I bought a school of 7 Rummy nose tetras on Wednesday and even after 3 days Rummy Nose Tetra school has faded noses. They got stressed in transport and were shivering when added to the 20 Gallon tall aquarium. They finally stopped shivering when aquarium lights went out in evening.

However only their lips are red till now and their noses are still faded. They are swimming at bottom of aquarium, I expect them to swim at middle. They still seem pretty sensitive to vibrations, mixer grinder, kids tapping the aquarium or jumping in house, even loud TV noises, people closing in on the aquarium, aquarium lights going on twice a day (on timer) etc.

Tetras are eating fine (there is a feeding frenzy for flakes), but how do I acclimate them so that the don't get stressed.

Water conditions are fine: 20 ppm nitrate, 0 of chlorine, 0 nitrite, 0 ammonia, PH between 6.5 to 7.0 except for hardness, my aquarium water has always shown as very hard. Could hardness be stressing rummy noses, or is it that they don't like bright lights?

I also got 2 Honey Gauramis (male and female), they seem more relaxed but tend to be on back wall hiding behind plants and decors. I have both plastic plants and vallisneria spiralis and Honey Gauramis seem to be eating the latter with some algae, but unlike tetras, they rarely go for flakes. Yesterday, I saw the male ate some floating flakes. How long will it take for Gauramis to acclimate?

This tank is fully cycled, it was taken down by ICH and I kept it heated to 86F for 2 weeks and did 50% water changes 7 times in second week. I also kept adding 2 ppm Dr Tims Ammonia every 3 days to keep tank cycled. For more details see How to resurrect tank taken down by ICH How Do I - | Freshwater Beginners 451265

Member
Do you have a photo of the tank? They might not have enough hiding spaces to feel comfortable. Also, three days isn't very long. When I got my pearl gouramis, they all tried to suicide jump out of the tank whenever I so much as walked into the room for the first week or so. They eventually settled in and came to be very social fish who would eat out of my hands.

If at all possible, please teach your kids not to tap on the glass. That's very jarring and stressful to fish. Even my most curious and social fish all jump when I close the tank lid a tad bit too fast. Try to keep other loud things away from the tank.

Fish can take weeks to settle in and some will always remain somewhat shy. So long as your water seems fine I wouldn't worry and just maintain patience I would try and discourage the tapping on the glass, that'll likely prolong the process.

It's good that they're feeding or at least showing some interest in food, you could try feeding some frozen food to try and entice the Honey's to feed more, it'll benefit the fish in the long run having frozen or live food mixed in their diet.

Member
Thanks for the reply. Here is the photos of the aquarium. 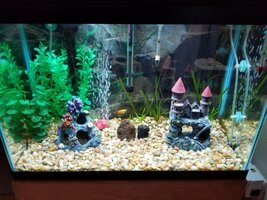 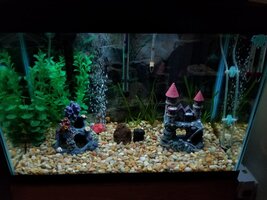 Do you have an update on their status or progress? I'm curious how it's going since I'm experiencing something similar with my rummies right now. (I'm new to rummies)