**Note: Im not a professional, just a new hobbyist looking to help others

-This entry is a series of notes I’ve taken while I was treating a new Bristlenose Pleco for Columnaris (or at least the presumed illness), that I am posting/cross-posting to spread awareness/information. I bought a new bristlenose pleco and 3 yoyo loaches from my local Petco on 6.16, and 2 days later I noticed these 2 white spots on the B.P. One was on the right side of the head, and another was on the outside bone of the front right fin, and they weren’t fuzzy or raised, but very obviously not normal. I immediately took the web and found various sources from other fish forum websites, leading me to believe this was Columnaris. 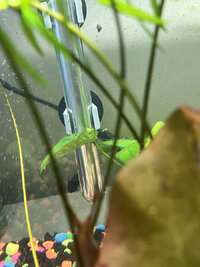 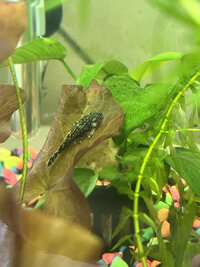 pictures from day 1 and 4 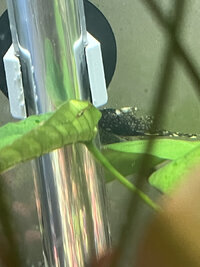 -I quarantined the infected fish and left to go buy Kordon ‘Methylene Blue’, Jungle ‘Fungus Clear’, and Seachem ‘Kanaplex’. The methylene blue would be used to dip the infected fish, I believe to help in general disease mitigation/prevention (like vitamin c when getting sick? LOL), the fungus clear (nitrofurazone) would be used to kill and bacteria from the water or the fish, and the Kanaplex as an antibacterial medicine to prevent further infection and promote recovery. I also reduced the temperature to ~75˚ F to lower the spreading rate of the bacteria. For the M.B. bath, I prepared a 3G bucket with <~5 teaspoons of M.B. and dipped the B.P. only for 10 seconds in a net. Then I returned the fish to the tank and added the other medicine. The J.F.C. is a dissolvable tablet containing Nitrofurazone and potassium dichromate, with the Nitrofurazone being the important ingredient (another product that can be used is Furan-2 according to my research), that turned my tank a bright green to dull yellow over the treatment. My dosing was 1 tablet per 10G, with a 25% water change before the second dose on day 4, and I removed my carbon from the filter per instructions. Then I added the Kanaplex which was powder in a bottle, dosing of 1 level measure per 5G, every 2 days for a maximum of 3 doses (Kanaplex is hard on liver is higher doses, so follow instructions).

-Following treatment over the next few days, I noticed the 2 infected areas didn’t spread or get larger but started to act almost like scabs. The spot on the right side of the head revealed an open sore/scar beneath, while the spot on the fin left an eaten away fin bone. On 6.24 there was an ammonia spike that brought my tank to almost 2.0-4.0 ppm ammonia, despite the fish showing no signs of ammonia poisoning (if that is the correct term, fish were acting normal/fine). I added an ammonia remover to neutralize the active ammonia, slowly removing it. I also performed another water change, increased the temp back to 80˚ F, and removed a plant that had been rotting lesser to my knowledge. Additionally, I’ve had the problem of snails getting stuck below my filter media section which could have also contributed to the spike (not sure but if anyone knows how to remove/stop the snails from getting in the filter or a filter good against them please let me know!). Today, 2 weeks after originally finding the infection, the afflicted fish is doing great! There wasn’t a single day the fish acted sick, and it is also coming into color now that it is settling in the tank. The scar on the side of its head has almost if not completely disappeared, re-healing perfectly. It is hard to tell, but I also believe that the fin is healing as there is what looks like healing near the base of the fin going outward. 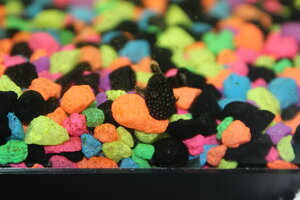 spot next to face gone
gap between fin bones 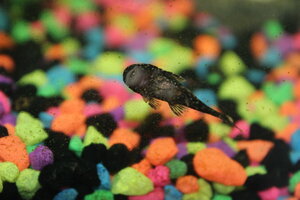 -During this whole ordeal, no other fish seemed affected by the ill fish or the medicine, and continued on normally. My first B.P. was very curious about the new one, but I was scared it would get infected but so far nothing. I also considered adding aquarium salt to my tank as a last resort, but as of now it doesn’t like a necessity, same as multiple M.B. dips, I didn’t want to possibly harm the fish. If symptoms are bad or getting worse, I think these 2 could be additional helpful steps, but action should be taken as soon as possible to save your fish. My fish went from being normal to looking infected within 2 days, any longer and it might have died or spread the disease, as Columnaris has multiple strains that work at different speeds.

Try adding aquarium salt in the methylyn blue and dip the pleco also try using terramycin for fish to treat columnaris and quarantine the pleco alone for now
You must log in or register to reply here.