Back story: On a random whim, I put up a Craigslist ad looking for unwanted fish for the tank I have been cycling (started 4 weeks ago, fishless cycle). Not a great at time to visit the pet store & I honestly didn’t think I’d get any response. However I got a quick response from someone looking to re-home these two gold white cloud minnows that they had also taken in a few months ago but were being kept in a tank with a betta and getting picked on. I am a beginner fish keeper but looked into the type of fish and thought they would be a great first addition to my (almost) cycled tank. I have been dosing 1ppm ammonia daily and it’s going below .25ppm in 24 hours, I figured in a day or two it would be able to clear it out. Nitrites are at 0 and nitrates 10.
My first question is can I add these fish tonight? I did a water change and dosed the entire tank with prime.
Another question is that I have been cycling at 82-84 degrees and read that these fish actually like colder water. However the woman I got them from had them at 80 degrees with her betta so I’m not sure if I should match that or what. Again, they were in her tank for a few months to half a year (last fall). There’s a male and a female and she also said they’re more likely to spawn in cold water but I’m not equipped for a bunch of babies.
Is it bad to switch from fishless to fish-in at this time? I feel like I’m so close and I’m aware I’ll need to keep testing water conditions and doing frequent water changes with prime.
I’m glad to finally have some fish but what else do I need to know about them? I’m thinking when it’s better timing for a visit to the LFS, I could get more so there would be a school of them rather than just the two.
Here’s a pic of them 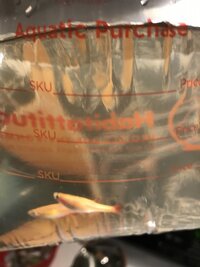 As long as you keep up with water quality i don't see there being any issues. Obviously you want to stop dosing ammonia. As far as temperature, float them at what it *should* be and let them acclimate. No need to keep them at 80.