Hello all! Just some food for thought to chew on

*no fish were harmed during this or succumbed to any danger! All I used was some chemistry to stimulate what I needed *

This was a sort of thought I had during class the other day (during a sociology class, nonetheless haha) about the idea of acclimating: 1) the drop and plop and 2) drip

Both are highly debated on which is safer; the former argues it's important that fish be given clean water immediately (because the release of CO2 turns ammonium turns to ammonia) from the bag and the latter argues that you risk a pH shock in doing so (and dosing something like Prime will make it safe while you drip)

I wanted to look at the relationship between CO2 and pH because I had the random thought that if opening the bag and having it sit out in "regular air" would be reason enough for CO2 to diffuse out causing ammonium to turn into ammonia (and alternatively driving the CO2 out and increasing the pH) thus validating the reason for a drop and plop (because there would be a pH spike anyways from bag to tank) THEN if exposing your fish to atmospheric air while drip acclimating would have the same thing happen. The pH spike happens anyways.

(*warning* there is a bit of chemistry involved here, but I'll try to keep it as simple as I can so nobody gets lost! But, I think you can just skip ahead to the result if you want haha)

Ammonium is produced as under standard atmosphere and pressure, CO2 is quite soluble in water and forms Carbonic Acid (H2CO3)

These are both equilibrium reactions (meaning products can turn into reactants and vice versa, the stay "equal" in the rate it occurs)

This acts as a buffer system to control pH. In humans (and even in fish in those bag) we consume oxygen and CO2 is released in the blood (or into the water and bag atmosphere) and releases more carbonic acid, creating a more acididc environment. That extra hydrogen atom being "taken" by the ammonia is what creates the ammonium. There is a point to this! This is why the pH decreases during shipping. Keep this in mind

Now onto the experiments:

I used my the hard tank water from one of my tanks (the only hard one; it's got a lot of mineral-rich rockscape) because it would be the easiest to track connecting the color shift. (Oh, and for anyone who is curious, I do believe the API tests use bromocrescol green as the indicator; this particular indicator turns more yellow in acidic conditions and more blue in basic conditions. At neutral, you get a mix and it's green! Makes sense when we do our pH testing )

I packed up some water in a bag, and added CO2 using some vinegar and baking soda and having the gas move from the bottle reactor to the tightly closed bag through some tubing. In the pic, you can see there is CO2 gas present: 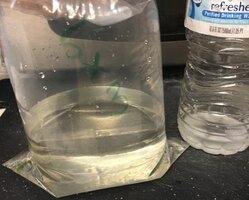 I let this bag sit for about an hour or so to give it time to react. I quickly used a syringe to extract some water without releasing the CO2 to the best of my ability and quickly measured the pH. Super acidic;

This would turn into gaseous CO2 which can then be driven off by diffusing it out (by shaking or whatnot...you'll see where this came into play later)

I left the bag in open air for 2+ hours, checking every 15 minutes for the first hour, then 30min for the next hour. The color remained the same. 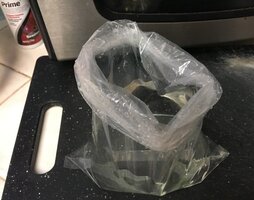 As a secondary thought, I thought of including some sort of agitation as some of us in a drip may use an air stone. This is where it thought I could introduce more oxygen and maybe increase the pH. Let stand for 2+ hours and hardly a change at all. The pH still remained acidic; it slightly increased, but it wasn't any dramatic results; more like .1-.2 change.

As a final experiment, I pumped pure oxygen (a lot of potatoes and hydrogen peroxide lol) and ran an airstone at the same time. Only then, did I get a very discernible pH change. But it did only go up approximately 0.4; but that isn't anything crazy dramatic considering how fast I could drive the pH down.

CO2 is quite soluble in water (although, it can be gassed off easily if it remains in the gaseous form) more so than oxygen it seems ( verified after some professional consultation as well as general understanding between the type of bonding that occurs between and within the molecules) hence my thinking to try and pump oxygen into the system directly and force the CO2 out as soon as I could force shift the reaction into releasing the gaseous CO2 to them be gassed off.
-------------

So, there were interesting results. In the course of home experiments, the pH hardly changed at all; it did remain acidic. This means that the pH is staying down, resulting in the ammmonium staying present.

So, does this mean drop and plop is a bad idea? Depends on how you look at it:
-You do have to keep in mind that D&P people are about getting fish out of that nasty shipping water, and are more than likely to throw their fish into a much higher pH. But after the trauma of the shipping, maybe a clean new environment is just the right cure.
-Drip people focus on minimalization of the pH shock, but that means keeping fish in the shipping water; not just the ammonium that's there, but general feces and other uncleanly wastes as well (which I can't really test right now).

Pros and cons to each right?

-----------------
I'd love to hear your guys' thoughts on this. I know it's imperfect and there are some variables that I don't have the resources to test right now (for example, testing for ammonium and ammonia; theoretically, ammonium should still exist entirely, but there can always be a discrepancy with physical testing. ALTHOUGH I do plan on possibly doing a test using ammonia in the bag as well and tracking that progress, if anybody is interested. I'll need to pull a few strings, but what professor doesn't appreciate a curious student? ). And I know I didn't take perfect measurements of everything (like the atm of the bag, the concentration of everything, etc...those are instruments not really available for the home anyways) but this experiment was just to get a general overview of something that may be happening and maybe further looked into . Or I could have missed something somewhere that may change the entire results!

If I missed anything or someone need clarification, feel free to ask. I'm sure the words in the brain go faster than my fingers sometimes and I skip things haha. And I get distracted by fish .

My water is super hard, so ordering from anywhere I usually have to drip acclimate or it'll be a crazy change for the fish. I add Prime to the shipping water before I begin to drop acclimate to keep things less toxic.

My water is super hard, so ordering from anywhere I usually have to drip acclimate or it'll be a crazy change for the fish. I add Prime to the shipping water before I begin to drop acclimate to keep things less toxic.
Click to expand...

Yup same here, plus most of the places I order from have breathable bags, which may be different.

Hmmm that would be interesting! Although idk where to get like a few, not a huge pack haha. Definitely add that to my list and maybe they'll be a part 2!

I know that when water is left in contact with atmosphere, it absorbs CO2 that is readily available from the air and gets acidic. On the other hand, maybe in none- breather bags fish create an even higher concentration of CO2 by breathing
On the other hand, I thought that all ammonium dissolved in water is hydrogenated, ie undergoes the following reaction:
NH3+H2O = NH4+ + OH-
Like you see, it creates OH- anions, which make for basic (opposite of acidic) environment. Adding CO2 would actually neutralize that.
So say in a none-breather bags, fish would produce both CO2 and NH3, which will tend to cancel each out to get some kind of neutral pH (this is very rough, because I don't know the ratio of CO2 : NH3 fish produce). When opening the bag, I think CO2 has less solubility in water, so it will be getting out, and water will become more basic. In breather bags, I would think there would not be much change.
KinsKicks, what do you think?
Can you tell I have insomnia

May 6, 2017
MadPangolin
Composition for a slow release humic substance/micronutrient Root Tab (any fellow chemists want to chime in?)