i recently started using api aquarium salt for my freshwater tank. i had it for a while but never used it til recently .

i read the box etc. from what i can tell its helpful? and ive used it after each water change. so i guess thats 3 weeks now . anyone confirm its a good thing? lol.

i guess my only worry would be salinity levels? but previous salt is taken out with each wc right? even though i put more right back in. i feel like there is something i should be carefull about that im missing.

box says like a tablespoon per 5 gallons. mine is 30(29) but i just pretty much eyeball it. thanks for the future info

picture: i wish my phone didnt over expose any source of light T_T

Well as far as I know, api aquarium salt is pure sodium chloride. No other minerals etc, just salt.

Fresh water typically has no salt, brackish water does have some salt. I do not use pure sodium chloride, but I do use sodium bicarbonate in one of my buffer mixes and on those tanks I use a refractometer to watch for salt creep by measuring specific gravity. I would probably do the same on a tank I'm using any sodium derivative, while also making sure that I'm only adding what I actively take out at water changes.

As far as benefit; I know there's trace sodium in allot of fertilizers, salt is often considered a good short term treatment for slime coat and wound treatment, and that many live bearing species actually tolerate or thrive in water all the way up to brackish levels (mollies can be converted to full saltwater but that's a different thread for sure). I don't really know much more benefit personally. On the negative, it can impair osmoregulation of most freshwater fish and several invertebrates we like to keep in the hobby find it lethal even in small doses, as do several scaleless fish.

I guess do what you need to do, but be careful with sodium products. Always measure when you add and remove from a sodium balanced tank.

On the negative, it can impair osmoregulation of most freshwater fish and several invertebrates we like to keep in the hobby find it lethal even in small doses, as do several scaleless fish.
Click to expand...

Osmoregulation is the keyword.
Salt can be used as a immune stimulant and help osmoregulation in hardwater fish (most rainbowfish, rift lake cichlids, livebearers), just as humic substances are used for softwater fish.
In the picture above I see only softwater species. For them only short term baths or dosing in case of a disease or parasites are ok. Longterm use is bad for their osmoregulation.
Also a longterm use can breed resitant strains of certain bacteria you don't want to be resistant, as then you have to use harder and harder meds in case something goes wrong.

So overall: I see no benefit in using it regularly on the tank in question.

Agreed, I don't see salt being of any benefit to those fish (or the plants).

Agreed with above. I don't believe salt should be used regularly in most tanks.

Salt can, however, be a near-miracle medication when used correctly. Definitely good to keep around for treatments in QT tanks.

with all of your responses to this. i have no idea why its saying its so beneficial

maybe one of those things they say you need but dont. like filter pads? guess ill stop using it. no reason to listen to corporate stooges over friendly fish vets >.> 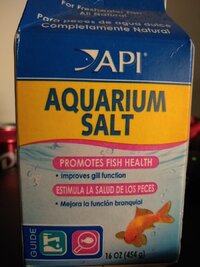 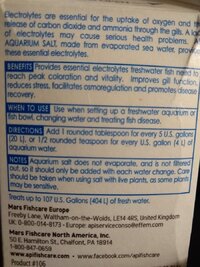 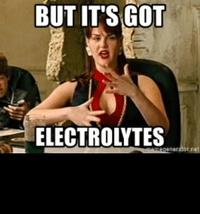 i have no idea why its saying its so beneficial
Click to expand...

What is your tap water like in terms of PH and hardness? Some coastal places have nearly pure tap water with negligible hardness and minerals and adding some salt might be a good thing.

What is your tap water like in terms of PH and hardness? Some coastal places have nearly pure tap water with negligible hardness and minerals and adding some salt might be a good thing.
Click to expand...

Not with fish that are adapted by nature to what comes close to distilled water.

Why Do People Add Salt To There Freshwater Aquarium?

Feb 11, 2020
Dch48
Questions about water conditioner and salt for a freshwater tank
2

Jun 19, 2019
coralbandit
Feeling the lure of a freshwater planted aquarium.

If you are unsure of a particular aquarium term, check out:
FishLore's Aquarium Dictionary