Years ago, I had a 55 gallon tank, you know the diamond shaped ones that sit well in a corner but are difficult to make use of because they are taller than they are wide? I somehow managed to find five different species of African Cichlids that would coexist in the tall narrow tank and successfully grew them to adulthood, keeping them for several years (at great cost to other fish along the way sadly). Anyway I won't go into gruesome detail about that, but that experience is what got me hooked. After having to give up that tank due to one of life's curveballs I avoided the hobby for years (afraid of commitment I guess . Anyway in January of this year (2018), my son, after spending months trying to convince me that I should get back into the hobby, bought me a 60 gallon tank from PetSmart as a late Christmas present. Even though I had been resistant to the idea, I was more than excited when we brought the tank home and so immediately decided that since I had kept fish before, that made me an expert on the subject! You can guess where this is going right? I managed to refrain from buying fish while picking up the tank at PetSmart but within approximately 15 hours of my purchase introduced 5 red eye tetras, 6 neon tetras, and 6 or 8 glow light tetras to the tank. Miraculously they all survived! I used tank conditioner and tested the water (obviously the tank was not cycled properly) but my parameters were relatively good and I guess I (or the fish) got really lucky.

This is the initial build. 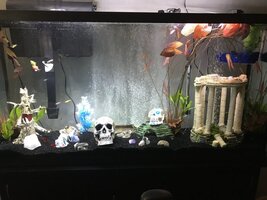 I used National Geographic substrate (Which is beautiful, but not intended for planted tanks as I later learned). I purchased several decorations for the tank from Amazon and Walmart and PetSmart. I also assumed I was safe to throw a couple of decorations I had around the house into the tank (I cleaned them with a mild bleach solution and then rinsed them for hours before putting them in the tank, but gave no thought to the coatings of paint and such on their surfaces. I placed a few live plants with a few plastic plants throughout and thought my tank was AWESOME!

The live plants grew well for a short period of time and then I added a couple of corner columns in keeping with the circular bubbler you see in the picture above. All went well for a few months and then the vining plants suddenly and rapidly started dying back. I was picking decayed leaves and stems out of the tank daily. after a few days of this I started losing fish (which by now I had seriously overstocked WAY to quickly). I did this because I had read somewhere that I could maintain up to 100 fish in my 60 gallon tank as long as they were 2" and under in size class (this does not equate to "add 0 new fish every time you pass a pet store!" Finally I came to my senses, STOPPED BUYING FISH, and tried everything to rebalance my tank. I was fighting a losing battle and could not figure out what was going on. I decided to move all of my fish (roughly about 30 or so at the time (after losing several), mostly small neon and glow light tetras) to a 20 gallon tank and completely drain, rebuild and recycle my tank. I had been playing with planting a 20 gallon over the past several months while all of this was transpiring and had it pretty well stabilized by this time. I knew if I was going to save all these fish I needed to act quickly and that I could not leave all of them in the 20 gallon for long without throwing it out of balance too. I had to many fish in too little space and if I didn't act fast I would end up with an ammonia spike and lose them all anyway. This is why you NEED to do your research before having an aquarium.

I'm sure by now I've illustrated with crystal clarity that I made every mistake in the book along the way I'm not proud of my irresponsible behavior and am sad at the loss of several beautiful specimens and species that I had but I am sharing this story hoping that others can learn from my impulsive and irrational behavior. I took a 3 day holiday over Memorial Day weekend, relocated the fish to the 20, removed all the decor (this is when I discovered that the corner columns that I had added were all of stagnant water (poisoning my tank), drained the tank, removed the substrate and plants, washed every bit of about 50 pounds of substrate, mixed it with enriched substrate, and rebuilt the tank. My new build contains nothing artificial. I have live plants and driftwood and rock, with no plastic or resin whatsoever. I replaced my over the tank Marineland Emperor filter with a fluvial 406, added a power head and blacked out the back of the tank (purely for aesthetics). I've added carpeting plants (which while everything else seems to be doing well are still getting established). This is what my tank looks like now... 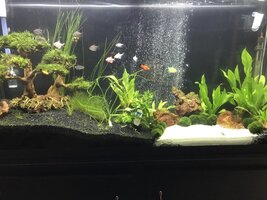 There are a few plants in the front center slated for another tank (See the tags? need a place to store them while I get it ready). The tank is still young and needs to mature but I'm much more patient and mindful of it's conditions. My impatience cost the loss of several beautiful fish and I hope by sharing this story I can help someone else avoid the same mistakes. There are a lot of people on this forum with a lot of knowledge. Do yourselves a favor and take the time to read what they have to say. Don't stop there, do your own research ... Google, Youtube, ask questions. There is a ton of information out there and it doesn't take long to find. Take the time to find it before making a purchase. You will be glad you did.
Animus

P.S. I'm happy to report that since my rebuild (of my tank and my behavior), I haven't lost a single fish in a couple of months.

Great story for Very Newbies. A lot of us along the way have made the same mistakes!

Nicely done, your tank is beautiful.

You're not the only one who had failures when starting the hobby. Even I did like so many other people. The main thing is to learn from mistakes. Btw, I do like your tank in picture 2...
Thanks for sharing your story...

Hey, well done. You've fixed your mistakes, something that most people never end up doing I'm still fixing up the many mistakes I made this year & last year:

-Moving goldfish to a pond
-Getting appropriate equipment for plants
-Learning about shrimp
-Learning tons about fish illness, 3-4 months ago I was attempting to kill camallanus worms with salt

You're going well. I screwed up in so many ways it's unimaginable

Wow --- I really like the second tank! Well done!

Probably many hobbyists can identify with learning things the hard way. Or I know I can.

Probably many hobbyists can identify with learning things the hard way. Or I know I can.
Click to expand...

I've started this hobby in the 1970's by my parents who started off in the 1960's. But eventhough my parents taught me well, it couldn't stop me from making tons of mistakes myself. But that's the learning process, huh...

I've started this hobby in the 1970's by my parents who started off in the 1960's. But eventhough my parents taught me well, it couldn't stop me from making tons of mistakes myself. But that's the learning process, huh...
Click to expand...

You're not the only one who had failures when starting the hobby. Even I did like so many other people. The main thing is to learn from mistakes. Btw, I do like your tank in picture 2...
Thanks for sharing your story...
Click to expand...

Thanks, Kind of you to say It's tough starting out in this hobby because we get so excited at the prospects and part of the fun is learning new things, which I do everyday and I'm sure I will continue to for years to come. The hard part is remembering that we are taking responsibility for another living being. I am very sad every time I lose a fish as I'm sure most people are. It would be nice if we could spare new comers from that disappointment and spare the fish that fall victI'm to our over zealous excitement, but sadly I fear it's just part of the process that most of us go through. I still consider myself a newbie, but the biggest and most important thing I've learned is to research and ask questions before doing ANYTHING that I haven't tried before. Forum's like this one are a fantastic resource that I am only recently discovering.

Hey, well done. You've fixed your mistakes, something that most people never end up doing I'm still fixing up the many mistakes I made this year & last year:

-Moving goldfish to a pond
-Getting appropriate equipment for plants
-Learning about shrimp
-Learning tons about fish illness, 3-4 months ago I was attempting to kill camallanus worms with salt

You're going well. I screwed up in so many ways it's unimaginable
Click to expand...

It's encouraging to learn, as I am on here, that I'm not alone. It sounds like your learning some pretty tricky stuff to master right now. I applaud your courage. Ponds!, even shrimp ... I'm not there yet, but maybe someday

Wow --- I really like the second tank! Well done!

Probably many hobbyists can identify with learning things the hard way. Or I know I can.

I'm in love with the new build, although I've come to the conclusion (mostly through advice on here) that I'm going to have to relocate my Julie and Albino Cory's for a short time before I can get my dwarf hair grass to carpet. I'm still hoping to do so without having to go the expensive road of CO2 infusion but we'll cross that bridge when we come to it I guess. I just don't feel like I'm experienced enough for that yet.

Your Parents passed on a worthy hobby, and I'm sure despite making some mistakes you learned a lot from growing up with that. That is an added bonus for me. My son is totally into the hobby as well so I feel like we are creating something that we can pass on

Going to be a whole lot of work!