I currently have a 65 Gallon Tank sand substrate 50-60% planted I am going to be upgradeing to either a 75 or 90 gallon soon most likely a 90 gallon so let's say I am going with a 90 gallon I most likely will be running my current cannister and adding a second I currently run 2 circulation pumps which my fish love to swim & play in plus they've done wonders for my tank so any fish I add is going to need to be comfortable with some current my tank sits at a steady 77 degrees and steady 7.2 ph so any fish I add would have to been in this range which is a lot of choices my current fish include

Here are some I've been thinking about

I've had both tigers & ruby barbs previously so I can go down this road again when my tigers dwindled for unknown reasons they were the only fish I were losing maybe stress from being too confined I'm not really sure but when they dwindled I brought the few to my LFS and decided to go the platy route with my diamonds and everyone gets along beautifully for all I know the diamonds maybe were stressing the tigers I would have thought it to be the other way around but who knows the tetras could just be a much hardier fish though my water stays pretty steady and I'm on point with my weekly wc's same with the ruby's beautiful fish I just couldn't keep them for some reason they would be good for a bit then I'd lose one here one there never the diamonds though very odd the platys have faired a whole lot better.

I may go down the barb road again I was thinking maybe a nice shoal of Odessa's would look good with the Diamonds similar temperament size and water parameters though slightly larger than diamonds full grown the ph may be a tick high at 7.2 but they im sure would adapt

Denison Barbs, Filament Barbs & Odessa Barbs would go nicely in a 90 gal. tank. You could mix in Tiger Barbs & add more Loaches.
I currently have Tigers, Filaments & YoYo Loaches growing out in a 65 gal. tank. It makes for an active & pretty tank. 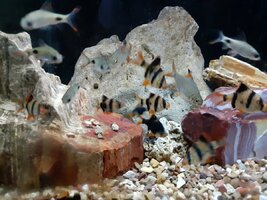 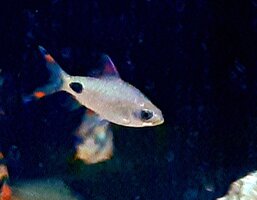 Denison Barbs, Filament Barbs & Odessa Barbs would go nicely in a 90 gal. tank. You could mix in Tiger Barbs & add more Loaches.
I currently have Tigers, Filaments & YoYo Loaches growing out in a 65 gal. tank. It makes for an active & pretty tank.

What’s the pic of the single fish?
Upvote 0

That is a Dawkinsia Filamentosa Barb. I have 13 of them. They grow to 4 - 6 inches & get more colorful as they mature. The pictured Filament is just a baby, maybe 1.5 inches.
Upvote 0

That is a Dawkinsia Filamentosa Barb. I have 13 of them. They grow to 4 - 6 inches & get more colorful as they mature. The pictured Filament is just a baby, maybe 1.5 inches.
Click to expand...

I'd advise ensuring that the temperature ranges of Loaches and Barbs etc. overlap so that you do not compromise one species and shorten its lifespan due to keeping at an unsuitable temperature.

You may have checked this already of course!
Upvote 0

If you want tetras then serpaes would be a good option, which you mentioned. Black neon tetras would be another good choice.

Have you considered a school of a single species of one of the larger rainbowfish, like turquoise or Boesmani?
Upvote 0

Thanks for your replies the more I think about it I think Odessa's would be an excellent option I've thought about Denison/red-line torpedos would a 4' tank be ok for them as they come from very high flowing streams and love to dart the length of the tank as big as a 90 is it may not be long enough for this type of fish I can be completely wrong about this however!

I have thought about a school of the rainbows i'm trying to keep the fish similar in size though I'm not against putting a larger mild tempered fish in there as a pair I'm just not sure if I want to add a school of larger fish thats why I was thinking of doing a pair of Kribs or Apistos as a centerpiece I did consider keyholes as well.

77 degrees with a ph of 7.2 although Odessas prefer a slightly lower ph of 6-7 versus what my tank is not sure if thats going to make much of a difference

the red serpaes would probably work as you mentioned Jetts

thank-you
Upvote 0
You must log in or register to reply here.