Finally got the lights on this tank (after having it running two weeks -filled 6/4, added media from cycled tank several days after- and adding a handful of snails and hermits recently - just added a couple loose zoas last night to test it and they are out and gorgeously happy). I'm going to have to get a good substrate mover because I have a little much and the cerith and nassarius probably won't cut it unless I get a dozen more.

So many corals to organize, on top of getting my six bubble tips settled in without them deciding to move too much (though the move will likely make the bigger two black widows split...again). I'll likely get another coral frag rack when I next take stuff in for store credit (or wait for my local store to get them in to use up that store credit).

Pictures bare to yesterday. This is in my fish building. I'm going to be popping the doors off the stand (they are removable because it is a hefty stand) and putting, hopefully, a dwarf seahorse tank in underneath (if it fails, a freshwater will replace it). 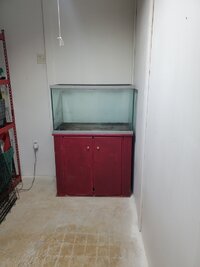 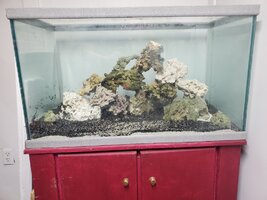 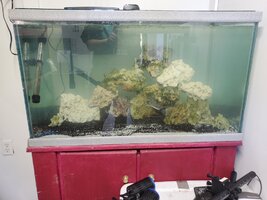 Cloudy after fill up. 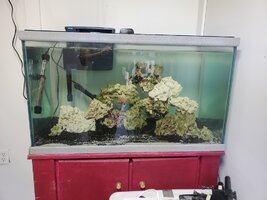 Clarity after a few days. 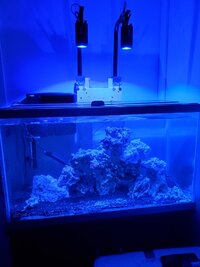 Kessils on first night (testing them). 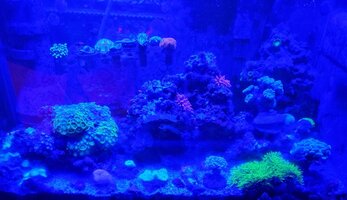 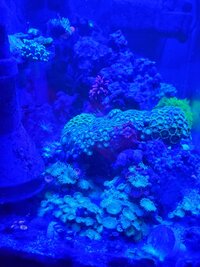 Zoas, palys, even a clam that I hadn't realized it was alive until a couple days ago when I saw it move (I've had the bigger zoa rock closer to the btas for over six months and never saw the clam move). 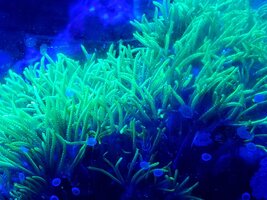 Maybe it's a zombie clam - watch out! I'd love to see your fish room. That is amazing progress. Have you automated (reef-pi or the like) your tanks?

Maybe it's a zombie clam - watch out! I'd love to see your fish room. That is amazing progress. Have you automated (reef-pi or the like) your tanks?
Click to expand...

No automation, will be pretty much manual because it is so far from the house (actual building designed for the racks+, will need to get more hose to properly run the water hose to the temp bucket to warm it because well water is shockingly cold). Central air pump to run all but the salt (it has a tidal 110 and will have a wave maker to prevent still areas), well insulated so will only need a radiant heater during cold times to avoid having so many heaters in tank/power. Need to get a dehumidifier to avoid humidity in the building itself and probably a small fan just for my benefit lol.

Not sure on the clam, it is the second one in my tank (the other came on some live rock I got for the 58), it may have just been much quieter than the other (which barely moves in its chosen nook) and sneaky about feeding, but I was pretty sure it was just decoration on the zoa rock.

First is just before I got the dry live rock into the tank (some base rock, some rock that was previously in a tank and dried, none truly straight from a wet system). 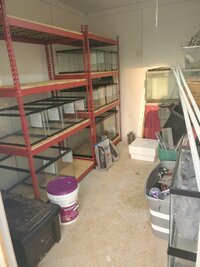 Second is just after I got the 30 gallon set to the right (Tuesday this past week). It is a true 30g (36"). Before I got the kessils up and running. 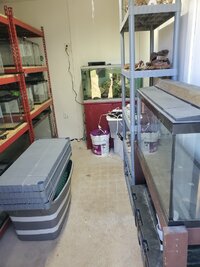 Still have to finish the shelves for storage (the gray stack will be going to the left of the door under my air pump shelf), and move out my tub ponds that likely won't be used this year . Otherwise I have four foot of clean area between the storage and racks, so enough space for one, maybe two people to walk in without being in each others armpits. 24 ten gallons, 4 twenty highs (one will be going under the 58, because the racks aren't wide enough without removing the 20h trims) 1 5.5g (shrimp tank),75g (angelfish planned), the 58, and now the 30g.

Wow it's beautiful!!!
You must log in or register to reply here.