Hey everyone I’ve had this 5 gallon tank setup since April of last year. I had a betta in the tank at first and moved him to another and added 3 pea puffers and some cherry shrimp from my other tank that breed like crazy!! I recently lost one of the peas I treated him multiple times for IP but he continued to shrivel away to nothing. The other two are nice and healthy. I decided to do a rescape last week because my Monte Carlo carpet was getting shaded to much and starting to die! Also I wanted to get some of the shrimp out because they were stealing most of the food! I don’t use and co2 and am using the Fluval aquasky running at about 40% power it’s very powerful on this small tank! I used Dragon stone for the hardscape and on the rescape I added some spider wood I believe it is. Plants I have Monte Carlo, Crypt Wendtii Red, Water Sprite. I later added Anubias Nana, Ar Mini, Bacopa Caroliniana and Christmas Moss I will post a pic from when I originally set it up last year and then a photo before the rescape and after. Let me know what you guys think of the rescape. I think after things start to grow back in again it’ll look really nice 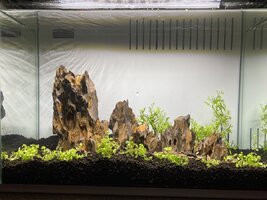 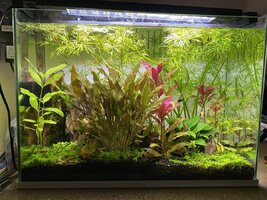 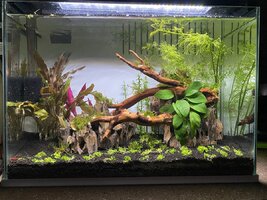 Thank you guys I appreciate it!
Upvote 0
You must log in or register to reply here.