Hey guys! I posted here a couple months ago with my Freshwater Micro tank and I got some good feedback. I'd like to share my current progress on this tank, and show people how far you can come in just a small amount of time!

First, I'll start off with my first build, which was... Very bad. I didn't know a lot of things that I needed to know. I didn't rinse the gravel properly, I didn't plant my plants individually, I didn't get the right gravel, I overstocked the tank, and aesthetically it was just a mess. However, I did cycle the tank properly, and I went with live plants, so there were no fatalities. 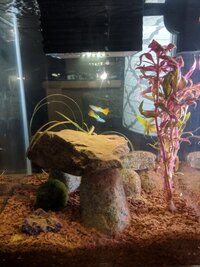 As you can see, it's very dirty and dark. Sediment on everything because I didn't rinse the rocks properly, and the Red Ludwigia is still bundled up. I separated them later and tried to plant them, but it was already too late and they died. The grass in the back is Mondo Grass, commonly sold as an aquarium plant, but it is not actually aquatic, just tolerant of wet conditions. I returned it and replaced it with Hornwort, which also had to be removed because of its prolific shedding. The only plant I got right was the Marimo Moss Ball, which is the only original plant still in the tank.


The only good s I have of the tank with the Hornwort are in this mildly amusing video:

Over the next couple months I made many changes. I removed the rock and the Hornwort, I added white sand and a java fern, and I also added a couple of Ghost/Grass Shrimp. I didn't realize at the time that my LFS (local fish store, do people use that abbreviation?) was bringing in feeder shrimp, and so I got a couple of good sized specimens. One of them lived very happily for a few weeks, then passed away.

As best I can figure, that was the lucky old survivor of the breeding tank, and I gave her a better life than she would have had otherwise. I hope she passed away happily.

On a less happy note, I accidentally siphoned up the other shrimp while cleaning the tank. It took me a while to realize what had happened, and by then it was too late. In an effort to replace the shrimp population I bought a pregnant shrimp and hid her in a shell. She wasn't doing well and I just hoped for some eggs to hatch. Unfortunately, this terrifying fellow found her first. 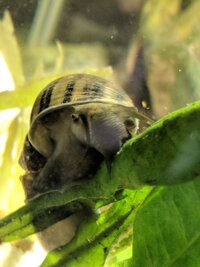 He wedged himself into the shell and pulled her out with his foot. He then proceeded to eat her out of his foot like a bat would eat an insect out of its tail. Six hours later, there was nothing left of that shrimp except for a head and tail. 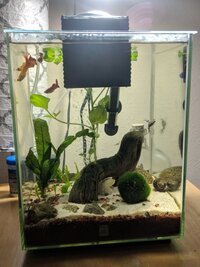 This is what the tank looked like after about three months. The population count at this point was 5 male Guppies, 2 apple snails, 3 shrimp, and 2 African Dwarf Frogs. Yes, it was very overpopulated and under planted. I was still learning, and because of my substrate the plants were having a very hard time growing. I got some mystery grass that is still doing... Okay. The java fern has done by far the best. I got three sickly leaves from the pet shop, and as you can see they have spread to four individual plants. The tall plant in the back was locally sourced, but apparently not truly aquatic, or not suited to a tropical tank. 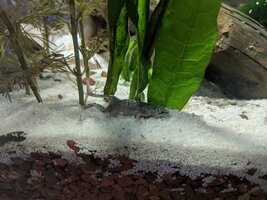 That little fellow is the first African Dwarf Frog we got. I didn't know they were social, so he lived alone, but we later got a male and female pair. He was bought from a pet store that did not keep their aquariums well maintained, and he actually got scooped out of the filter system underneath the display tanks. As far as I can tell, he had a fungus that suffocated his skin. He got a little better when we got him, but he eventually passed away. 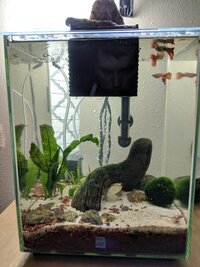 The tank stayed this way for the next three months, my plants struggling along and my pets dying one by one. Fortunately, none of them were due to neglect or mistreatment, just mistakes that I have taken to heart and learned well from. The Golden Apple snail must have had a calcium deficiency, because its shell began to form with a large crack in it and it eventually died. The frogs never bothered the golden snail, but the black one was constantly accosted by them. They would nip at his antenna and body whenever they were near, and one day he got too close during feeding time and they both struck together at his head. He was dead the next morning.

One of the Guppies I suspect was bullied out of the tank one night, and because I had accidentally left the lid partially up the night before, I found him dried up on the floor the next morning. I suspect bullying because of the overstocking, and because he was the smallest but most flashy guppy.

The male from the pair of frogs also passed away. Do you see the rocks in the bottom left corner of the tank? He loved to hide in there, so I englarged the cave one day. Unfortunately he got himself wedged, or perhaps one of the rocks shifted, and he was crushed/suffocated.


This weekend, I felt I had what I needed to completely overhaul the tank. I wanted to do a truly planted tank, but I didn't want to disrupt my cycle either. I had collected and ordered some additional plants to really fill the tank. I collected duck weed and some variety of green Ludwigia from local ponds, and ordered Dwarf Rotala and Dwarf Hair Grass online. I still had the moss ball, the java ferns and the mystery grass. I also purchased a Water Sprite, which I found to be pretty but very delicate. 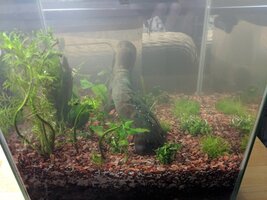 In order to preserve my cycle, I took a gamble. I risked losing my inhabitants or dooming them to live in a temporary home for far too long. If I didn't have enough substrate to mix with the soil, or I didn't leave enough clean substrate to top it with, I felt sure the potting soil would leech into the water and cause an abundance of problems. I was also worried the bacteria would be disrupted by the addition of so many foreign compounds. When I set up my temporary enclosure I moved everything over. The driftwood, the plants, the filter, the entire tank of water and all the inhabitants. I had a few fish safe rocks laying around that I also put in to give them hiding spots. I anticipated having them sequestered for at least three days, but the next day the tank was clear and they were reintroduced with no complications! 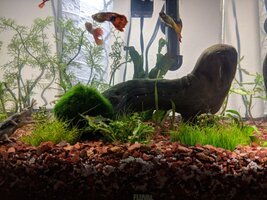 In addition to keeping all the old water and mixing it half and half with purified water, I also kept the bottom inch of water and substrate. I then mixed this with sand and potting soil, put another layer of soil and substrate with a smaller amount of soil, then topped it all with well rinsed gravel and sand. I didn't clean the filter during this process, and the water that got replaced into the tank was approximately 40% original tank water.

Before all the new plants went in, I believe this tank was devoid of cover and overstocked. With the addition of the new carpeting plants and rearranging of the existing plants, I think this is finally the appropriate tank for the inhabitants I have. 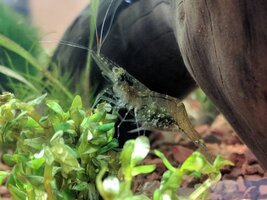 Of the three current Shrimp inhabitants, one is definitely female. This is the second clutch of eggs she has laid, but the first were never fertilized. I hope these ones will hatch, and although they will probably be eaten, that is unfortunately the way of life.


The new male and the old female frog are doing very well. I feed them blood worms and brine shrimp, although they will also feed the flakes the fish eat, and the fish eat the shrimp and worms too. They have been mating, but I've yet to salvage any eggs. The old couple did lay eggs, but they were all eaten before I could remove them. I believe this new pair is laying as well, I just need to get up at night to try and save some. 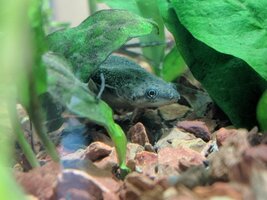 Thank you for reading all the way through! As a first time tank owner, I'd love to help anyone else who is just starting out, and I always welcome feedback both positive and negative on my setup. Heres a bonus photo of the female frog getting all gussied up for her mister! 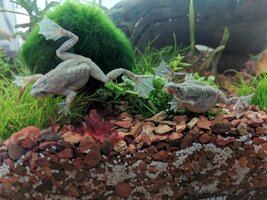 (Just kidding, it's a bloodworm)

Feb 3, 2018
Aqua J
How to go over having a planted tank then upgrading to new tank?