This is my first post, thought I would share the young planted tank I've been working on.

Plants -
Telanthera (roseafolia)
staurogyne repens
Bacopa (lemon)
Java Fern
Dwarf Hair grass
micro sword
cyperus Helferi
dwarf onion (from a bulb I had left over from a LONG time ago, just wondered if it would grow...it did)
Another very tall grass like plant of unknown name - grew very well in a 10 gallon. Not sure it's full aquatic, but it does well submerged
unknown cryptocoryne

Tank was setup and filled with treated tap water on 3/6/18. I moved fish from another tank until Ammonia spiked and then removed them while things cycled. After the initial cycle I repeated with more fish then removed them while things stabilized. the next repeat just checked the filter and everything was stable and great looking. in all it was about 25 days to a working filter.

Around this time I got completely fed up with our local water supply. I'm in Des Moines, Iowa - we are a farming state and the fertilizer run off in our streams means we have VERY high nitrates in our water. Far higher too high to be measured with the API nitrate test. So I invested in a RO/DI filter.

On 3/28 I drained the tank and started to add plants from a 10 gallon tank I was using for guppies and to grow out plants. the goal was to get rid of the 10 gallon eventually. When the initial planting was done I refilled the tank with RO/DI water treated with Equilibrium. I added a group of guppies back to monitor the filter and then removed them after two weeks.

I let the plants root and start to grow and then I added 6 Albino Corys and 12 Amano Shrimp and 1 Mystery Snail on day 60. By this time I had some mild algae growth on the rehomed plants and some brown algae starting to grow on the glass and rocks which was easily removed manually.

I just let things sit for a month from this point. I did weekly 25 to 35% water changes and manually kept algae growth in check. I added some more (new) plants. I also started on a slightly lower dose version of the Seachem dosing chart.

Around 80 days the plant growth was fast and tight, and my nitrate readings were almost zero, which i'm assuming means that the plants are using it faster than it's being produced. I raised my dosages of nutrients, still following the seachem chart. I also ordered 30 Red Cherry Shrimp

The Cherry shrimp were drip acclimated, added to the tank 5 days ago and are doing great. I lost a total of three - 2 during shipping and one was found in tank the morning after they were added, which I write off to shipping stress as well. the Amano shrimp that were added at day 60 are still doing very well - I'm sure there are still 10 in the tank, and I suspect the full 12 are still there, but they are very hard to spot all at once. The Cory's are also doing very well, very active.

I've decided to add fish now. I'm hoping that I'm not to early in the process, but the water parameters are stabile, the plants are doing great and the current inhabitants seem to be thriving. I have 30 juvenile tank raised microdevario kubotaI on order which should arrive this week. They will be the only fish added.

Tell me what you think! It seems to be going swimmingly at this point. I was a bit worried that I didn't have enough light, or that the 24/7 cycle would promote algae growth, but with the lower profile of the 40 gallon breeder it seems to be right in the sweet spot. CO2 is new to me, but i'm keeping my 4dkh solution in the green. The corys/shrimp seem happy and my PH isn't really swinging a lot...so i'm hoping it's in a good place too. I think some of the plants could use a bit more iron i'm seeing some slight yellowing of the leaves of the staurogyne repens and I feel like the Telanthera could be a bit more red...any thoughts? 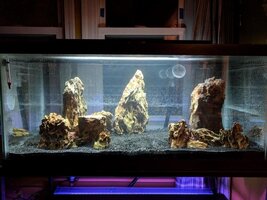 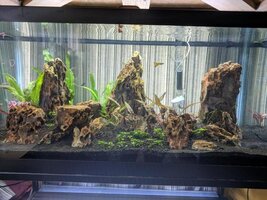 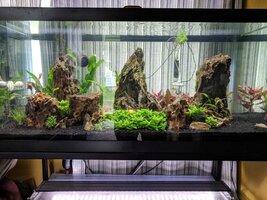 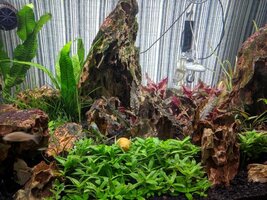 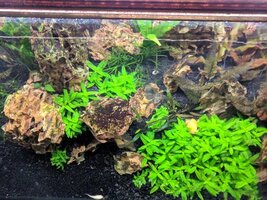 Hubby says plants look good. I’ve never done co2. But everything seems to be going your way. My kinfolk in Iowa have issues too. My second cousin (my baby) traded her beautiful bettas for a bearded dragon because fighting the tap water got to be too much of a hassle. Zeus is adorable.
To me your tank sounds amazing.

I would for sure up potassium and iron, both are really important to plant growth, when one is being used up to almost deficiency level, the other is probably right behind it as well. The same happened with my staurogyne until I raised both dosages of iron and potassium. But it looks great, definitely will be even better when it’s fully grown in!