40 Breeder Plant Only Grow Out

Snagging the intro from my other related thread!

I've spent a lot of money on plants these past few months, and I've decided to invest in a grow out tank. I would like it to be for profit too. Now I know that there is a lot of competition. Local shops, Petco, PetSmart, online retailers and small shops, etc.

But! Here's my issue and why I think it may work. Most every lfs in my area is between 1-2 hours away. Those are long round trips for plants. Shipping can get expensive when ordering from larger retailers, and in most cases the plants are grown emersed. Most of the plants that I've seen in the lfs don't look too great either.

So why not start a grow out tank with fully immersed plants? Local pickup, local shipping, national shipping, and hopefully a superior quality.

I still have some reservations because I'm pretty new to planted tanks but it is something that I enjoy doing and I'm willing to put the effort in. I know that I won't be successful right off the bat, but it's a good way to learn quickly.

If it all comes crumbling down I will at least have a 40 breeder and some awesome equipment to start another fish tank!

I got my hands on a c02 setup, a Fluval 3.0 light, a Fluval 306 canister filter, and a 100 watt heater. There was a lot more to the package but its been listed elsewhere! The Fluval 3.0 is the 24" model so I'll use it to start but the plan is to move that to my 20 and grab the 36"- 48" model for this tank. I want the light to spread evenly and not focused on the center of the tank. I am saving the canister filter for a larger tank and for a much later date. I grabbed a powerhead for water movement. Because of that decision I had to purchase a new difusser and c02 proof tubing. The entire setup was built to work with the canister filter and I think that it is a bit overkill for a plant only tank.

Original plan was to put the tank in the basement and build a cinder block stand with some MDF wood for layers, and 2x4's for the tank to sit on. I thank a particular user here for all of his help on that! I won't tag you because I don't want to force you into this thread haha. Anyhow, that didn't work out because the basement is a hoarders heaven. Out of my control. I then decided to put the tank in my office which is where I moved the 20 gallon to. Unfortunately the weight of the cinder blocks, wood, and filled tank would have been around 900 pounds (35 pounds x 12 blocks and 420 pounds for tank not including substrate). The 20 gallon probably weighs in at 250 pounds plus that stand and I also have my desktop build and large "L" shaped desk in there which probably adds another 300 pounds.

One night I would have awoken to a beautiful sound and a bill that I could never pay.

I tried to justify the weight by doing some awesome math. The house is old but built pretty solid, well at least the main floor is. The office is supported by multiple beams running across the ceiling of the basement with a support beam off to the side. Not directly under the office, but fairly close. Please excuse my structural incompetence. On to the math! I figured about 30 pounds per square foot. The office is 72 square feet which brings me to a total weight capacity of 2,160 pounds. /with everything listed above that brought the weight to 1,910 pounds and that isn't including miscellaneous items like the computer chair, printer, etc. I thought, well....lets average it out to 2,000 pounds even. I still have 160 pounds to work with. I was already nervous at this point but I was set on creating this build......

I then realized that I weigh 195 pounds. I killed the entire thing. I was up for hours trying to use less wood and less blocks, but the tank would have sat too low. I'm not a super tall guy, but at 6'2 it would kill my back to maintain that tank. My only option was to search out a proper 40 breeder stand. I have to say that a decent 40 breeder stand is like trying to catch a leprechaun. Just give me the gold already.

Begrudgingly, I settled on the Imagitarium Brooklyn Metal stand. I've heard and seen great things and then I've heard and seen terrible things. I had to take the chance, this was my gold. I think it weighs about 30 pounds which is less than one cinder block. That brought the weight down significantly. I want to say that the stand that I received is in great shape and feels pretty sturdy. I sat on it and sorta pushed myself up and down a few times waiting for a break or stress bend to happen. It held nicely and the tank sits flush. The leveling feet are a nice addition as well. I've seen a lot of people add wooden shelves to this stand and I am going to do the same. I need to have someone do it though because I cannot cut in a straight line and I don't have a table saw. I'm terrible.

Feel free to correct me on the math, support capacity, etc.

I'm not going to put a canopy on this tank and I might omit the heater. The office can be a bit warm and I don't want to cook these plants. I just finished up putting red clay, miracle grow organic potting mix, and a cap of BDBS in the tank. I definitely need another bag of BDBS. I'll grab some more of that tomorrow. The powerhead is still in transit and as soon as that comes in, the water is going in. I may pick up a Fluval 50 HOB just in case some of the potting mix does breach the sand and clouds the tank. I'm planning on putting plastic bags down while filling to prevent disturbance to the substrate, but you never know.

I had the soil on hand already, and I had a half bag of BDBS so I'm not adding those to the total, but I do need another bag of BDBS. I had to add the blocks and wood because I did purchase them for this build but it just didn't work out. I can probably find some DIY thing to do with the materials. It seems like a lot of money but the c02 system that I was looking at is $212.00 without a tank, the Fluval 3.0 is $149.99, the Fluval 306 is $164.99, then the media, plants, drop checker, etc. Yes, I would not have purchased the canister filter for this build, but the c02 system was more than everything that I received. Look at me trying to justify my addiction!

Here are some photos with one question. Is this diffuser large enough for this tank? I did choose the large size.
Free marketing for Dustin. 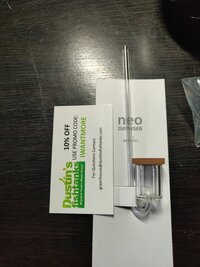 The red clay is spread like this throughout the tank. I picked out as many sticks as I could. 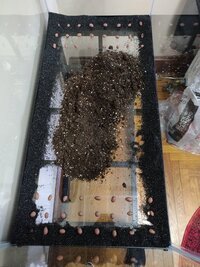 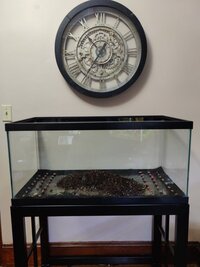 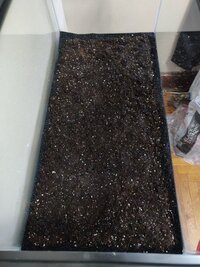 With a small BDBS cap, and my 20 gallon and me in the reflection. 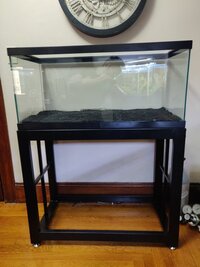 I'm interested in seeing how this goes! I've never used CO2 before but it might be something I try in the future. I honestly can't be any help to the math or weight or anything, but I'm interested in seeing how all the plants grow, definitely wished I would have put soil underneath my BDBS too but oh well!
What types of plants are you thinking about first?
Click to expand...

This will be my first attempt at c02 so we'll see how it turns out. I'm hoping that the combination of c02, soil, and red clay for added iron will have the plants growing healthy.

I'm going to do a trial run with Blyxa Japonica before I go all in. I have extra from my 20 gallon and this will give me the opportunity to play with light and c02 settings without compromising an entire tank of plants.

The thing with Blyxa is that some people prefer the way it looks when grown outside of c02 and high light.

No c02 and medium light usually keeps it green. C02 and high light will see Blyxa turn a yellow and or red. I could always sell both versions of it! Some from my 20 and some from the 40.

When I finally have it kind of figured out I'll probably do some basic starter plants like Java Fern, Java Moss, Amazon Swords, etc. Then I'll move up to plants that are a bit tougher to find, especially in a submerged state.

Sadly this project is on hold. Most likely moving by November.
You must log in or register to reply here.

Does this DIY stand look safe??

Info Before You Buy Flourish And Ferts In General