I recently set up a 33 long with lots of plants, mostly java ferns. My light is a 48" beamnova. It's a big upgrade from my 10 gallon with its 2 stock LEDs. The 10 started to get too crowded with all the plants and I wanted to expand, hence the upgrade. I used the old filter and 'mud' from the 10 gallon to kick start the beneficial bacteria in my 33. A pea puffer, 9 neon tetras, and 2 black neons were added the first night. (the 9 neon tetras were lost - my fault - I didn't temp acclimate them slow enough)

Anyway, 1 week later - I currently have all of the above(minus the neons) plus my 'koi' betta, as well as 11 pygmy gouramis.(8 are adolescents) Tank parameters are excellent. Temp is 79F. Everything reading 0 except for nitrate which is ever so slightly above 0. I'm doing 5 gallon water changes daily. There is some residual cloudiness which I believe is from not washing the fresh black gravel enough. It seems to be decreasing as time goes on.

My goal is to create a heavily planted tank with 1 male, 1 female betta, and maybe 1-2 dozen of the pygmy gouramis. I would also like it to be semi-black water. I'll be using half of the recommended amount of almond leafs when I finally get some.

Now, on to the questions. Some may be easily google-able, but I enjoy the discussion so responses would be much appreciated.

-Has anyone else attempted a planted black-water/hybrid?
-How can I encourage the gouramis to come out of hiding and be less shy? Perhaps sitting in front of the tank often - maybe moreso while feeding?
-Will my modded filter cartridge(I cut open and added 10x the 'stock' amount of activated charcoal and resealed) filter out the tannins from the almond leafs I plan to add?
-Do bubble filters help? Or will the surface turbulence from the filter be enough to oxygenate?
-Is co2 worth the extra cash/time for plant growth?
-What is a good 8+ outlet/surge protector timer combination recommendation?
-What type of micro-fauna can I add to the tank to create a good feeding stock for my fishies? I'm guessing brine shrimp won't work as 'live in' food since it's Freshwater - I'm currently building a breeding bottle setup for them. I also have water flea eggs on the way. What else can I add that can 'live' in the tank that the fish can hunt down over time and not just during feeding time?
-Any tips on increasing color or caring for the gouramis? Perhaps decreasing the light? Temp change or pH drop?

I don't know the answer to a lot of these questions but I can tell you that I've done plants in tannin riddled water with success, but you can't try anything outside low light. I used anacharis just fine. Epiphytes, crypts, Java Moss and hornwort did reasonably well.
If you add leaf litter and lots of plants, you may get away with daphnia, but a shrimp colony would do better as you don't want many fish to do daphnia. Last summer I had one paradise fish in a 30 inch diameter pond with lots of scuds, daphnia, copepods, etc, tons of floaters, and the above plants. Never feed him and he was gorgeous. The raccoon that got him must have thought so too...
As far as pygmy gourami, the betta won't mix well. They'll scare them 24/7. Maybe set up 2 tanks?
If you do black water, I doubt you'll get enough light in for co2, but others may know more.
Not sure on the carbon...
The tannins should bring out colors in the gourami. More structure will make them secure.
I think any filter will do if you only have bettas and gourami...they don't need much flow.
Just realized if you culture the daphnia seperately and have backups to add later in case they should work. Maybe seed shrimp too? Scuds may eat plants... Snails?
Sorry if that's jumbled lol I had to go back and forth a lot.
Edit...check out leptolucania ommatta. I think they'll go well with sparkling gourami.
OP

Thanks for your reply!

No worries about being jumbled or sporadic with your reply. It was very helpful. Right after I posted my OP in this thread I followed a link that said pygmys are a no no with bettas, but my Male seems to be more of a "I won't mess with you unless you mess with me" - type, not the "I'm gonna kill all teh things!" -type. So I'm not too worried about them. I have noticed some light nipping when they get too close so I'll be keeping a close eye on them for the time being. The long styled tank gives them more room than a usual style, so I'm hoping thatll work to my advantage. I may move him back to his originally quart sized tank eventually, though I would feel bad if I have to do that as he seems a lot happier in the large planted tank. (His small quart tank had a huge java fern in it and I keep it very clean, but he doesn't have the room to swim or have a tank mate)

Regarding black water. My goal is moreso for the health benifits/color of the fish, rather than being a 'true' dark natural black water tank, so I'm hoping I can achieve a nice balance more towards being a traditional style rather than a super dark black water tank. I'm thinking I'll start slow with one leaf and work my way up over time, observing changes in plant growth, health/happiness of the fish, and fish color as I go. The vast majority of my plants are java fern, and the gouramis seem to like this frilly plant who's name is slipping my mind right now, but it is very similar to hornwort.

Another thing worth noting is that since the tank is so short(I can't get over the perks of having a long tank!) The light penetrates down to the bottom easily, or rather, easier than it would in a tank twice as deep. The way the local fish store owner described it - he said that Ky light would be considered medium in a larger deeper tank, but is considered high in my current one. So hopefully it doesn't lose too much power once I start adding almond leafs.

I'm hesitant to add shrimp at the moment - I find inverts tend to be more sensitive to water changes, at least in saltwater tanks. Even though I rapid cycled with my 10 gallon water and filter I still feel the need to let the tank get in a rhythm before adding shrimp and other inverts. I do have my eye on those small blue and reds though!

If the daphs can't survive without litter then that's fine. I have my 2 gallon jar I can culture them in. I also just finished my 2 liter brine shrimp bubbler setup and it came out gorgeous. (Pics of everything will be posted when I can get home)

I appreciate the suggestion on the fish pairing with the pygmys but I'm actually trying to eliminate variations in species of fish and focus on just one or two for now. If anything I'd want to remove the betta and do an all-pygmy breeding tank.

Interestingly enough, the new 9 adolescent gouramis I added seem to pick on my betta more than the other way around. The original 2 males have been hiding out in the...er...hornwort-type plant I already have in there.

Also I heard the 2 adults clicking at each other yesterday! So that was cool. This fish has me hooked right now. Heh

Thanks again for your reply! I really appreciate your input!!!

Pics after treating with a teabag of almond leafs. The water is significantly more yellow/brown in person. The picture doesn't do it justice. I added another 10lbs of washed black gravel and moved things around a bit. The ditritus and plant matter stirred up still hasn't fully settled yet. I added a baby pleco to help fight algae and 2 (hopefully) adult female gouramis. First pic is of my brine shrimp setup. I also added a air line/bubble ball to the main tank. 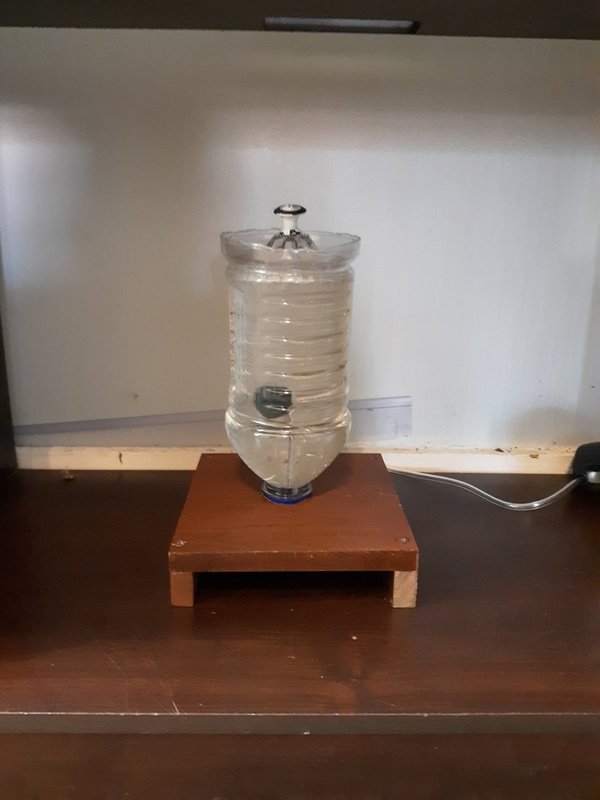 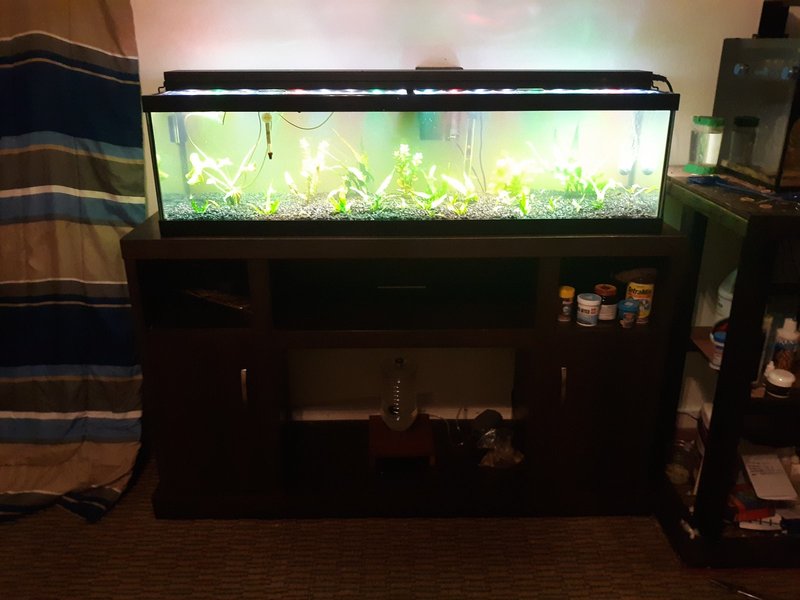 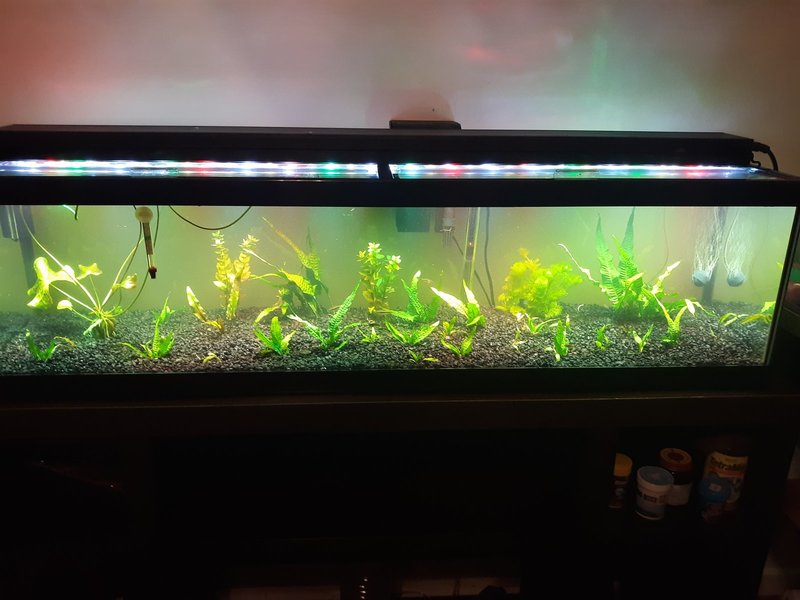 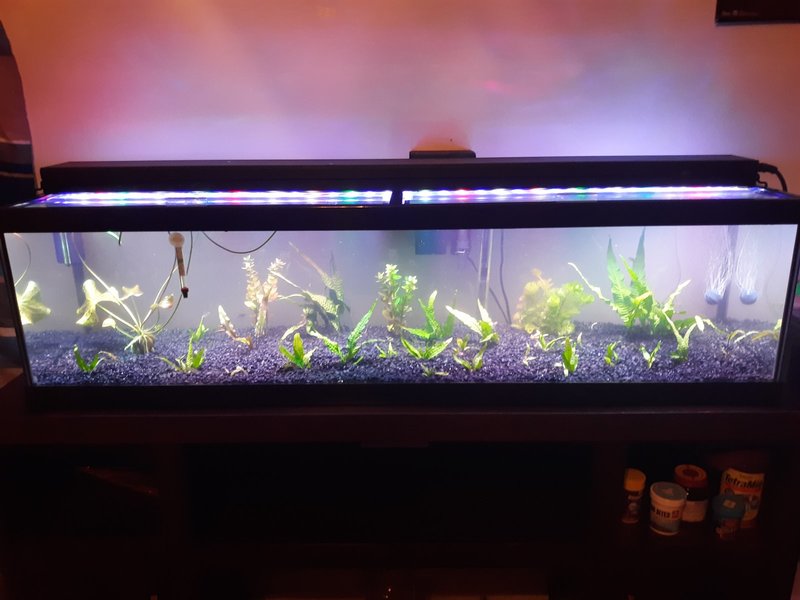 2cent said:
Pics after treating with a teabag of almond leafs. The water is significantly more yellow/brown in person. The picture doesn't do it justice. I added another 10lbs of washed black gravel and moved things around a bit. The ditritus and plant matter stirred up still hasn't fully settled yet. I added a baby pleco to help fight algae and 2 (hopefully) adult female gouramis. First pic is of my brine shrimp setup. I also added a air line/bubble ball to the main tank.

I like that tank!! Not often that you see one that long and low!!!
OP

I know right!? It makes it super easy to reach in and shift things around. I originally bought it for use as a Saltwater tank to propagate corals. Less height = more light! But alas, Saltwater was more of a money burner than I could afford and I never got around to setting it up. I'm glad I finally put it to some good use.