Whew, it's been a while. I had to rehome all of my aquariums when my family moved across the country, and my parents have been adamant about not letting any more aquariums into the house. However, good deals, and the ability to pay for things myself, seem to be good agents of swaying for my mom, so my room is now graced with the presence of a 3.5 gallon acrylic aquarium. It's a top fin aquarium kit. I figured since it's a pretty small aquarium I could afford to splurge on substrate, so I ordered 4.4 lbs of Fluval plant and shrimp stratum, which had pretty good reviews and wasn't as crazy expensive as some of the other options. It's coming in on Sunday. The filter it came with had notches for the two activated carbon filter cartridges it came with. I decided it could use some more biological media, so I dropped by home depot to grab some lava rocks and little scrubby thingies(oxi brite or something.) I made a makeshift cartridge with those, filled the aquarium and started running it.
I have very few supplies at the moment. My master test kit, seachem prime, flourish, and excel, my heaters, my aquascaping kit, and my food mixes are all back in a locked room in our old house, which we're renting out. My dad will head back there in the middle of January, and will grab all of those things. In the meantime, my plan is to start blindly cycling(basically just adding controlled doses of pure ammonia and doing frequent water changes) and start planting it. I'm not really sure what I'm going to stock it with yet. Probably some RCS and nerites or mystery snails. Mayne a dwarf crawfish. We'll see! I'll update when the substrate's in. Also I know I'm doing this kind of out of order. I just really wanted to get water into this aquarium 23] 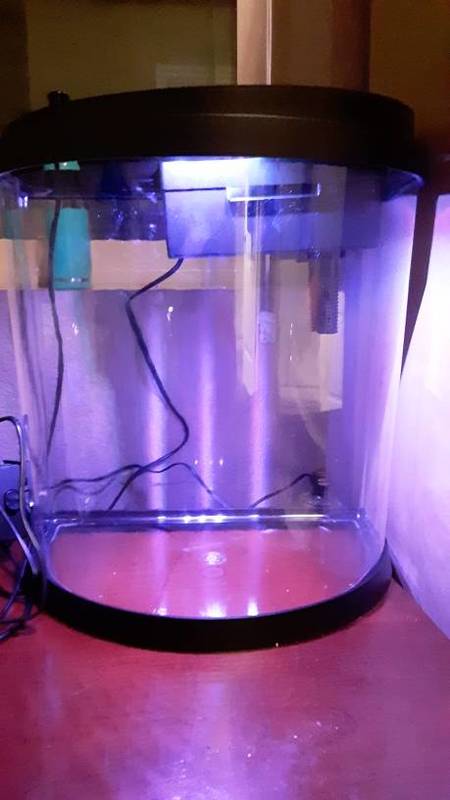 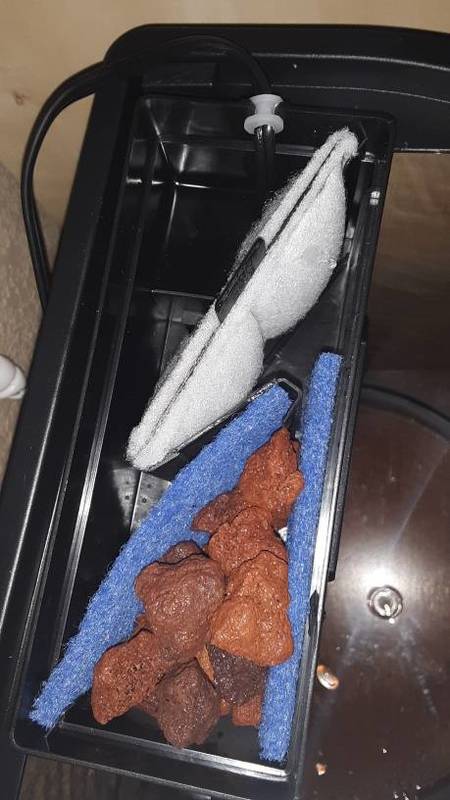 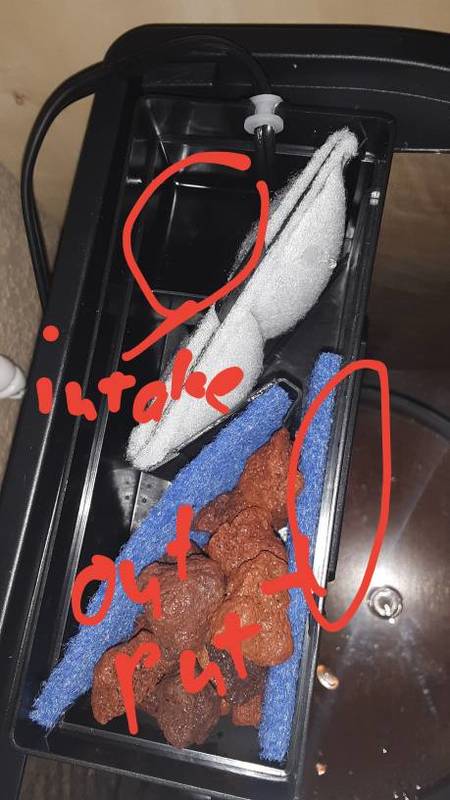 Cool! Have you seen blue velvet shrimp? Those guys are pretty neat.

I have! The only place I've seen them is on Amazon, where they are super expensive, but since I won't be stocking until January, I have time to save up! 4]

Ok, what's the name of that one seachem product that you put in your filter that keeps your water nice and clear? And you refresh every few months with bleach? I can't for the life of me remember it.

That’s sad about your aquarium, but I’m glad your getting a new one. I actually had one of those aquariums once (betta and shrimp) do you know if you’ll add any fish? Looking good btw.

rubysword said:
I have! The only place I've seen them is on Amazon, where they are super expensive,
Click to expand...

I haven't ordered from them, but a co-worker has, and he's happy with them.

rubysword said:
I have! The only place I've seen them is on Amazon, where they are super expensive, but since I won't be stocking until January, I have time to save up! 4]

Ok, what's the name of that one seachem product that you put in your filter that keeps your water nice and clear? And you refresh every few months with bleach? I can't for the life of me remember it.
Click to expand...

Sorry but I don’t know about that either ! I just do frequent water changes and that keeps mine clean and clear. Check if your town has a local fish store. They usually carry cool animals like that.

Oh, I'm planning on doing frequent water changes, I just remember people raving about it. It's a replacement for active carbon that you can reuse... I'm going to go find it on the web, if I can...


Sien said:
Sorry but I don’t know about that either ! I just do frequent water changes and that keeps mine clean and clear. Check if your town has a local fish store. They usually carry cool animals like that.
Click to expand...

I just moved from a tiny town to a decent sized city, and I'm so excited about how many mom and pop fish stores there are! I contacted a few of them asking about special orders and the like.

Purigen! Seachem purigen. You don't want to use it until your tank is cycled, but once you have a healthy population of beneficial bacteria, it polishes the water beautifully.

Update-found a mom and pop fish store and have been exchanging emails with somebody on their staff. They have a wide selection of plants, can special order-in the representatives words-"anything you want," and can give me seeded media. And, the best part is, I can get there today!

Last update today, I promise! Went to the fish store, and I have to say, they exceeded my expectations. The aquariums were beautiful. Like, not just clean and well maintained, they were aquascaped and pleasing to the eye. I got a piece of filter media, and asked if they could test the water. I had a sample of the tank water(I added some pure ammonia earlier today, about 1 tsp in the whole tank) and of my tap water. They tested it(with an api test kit-yay!) and came up with these readings:
Tap:
pH: 7.7 ish
Ammonia, nitrites, nitrates: 0
Tank:
pH: a little higher than 8
Ammonia: 4 rpm
Nitrites: barely registered, but there
Nitrates: 0

So since the tap pH was so high(in the tank I'm not worried, I think it's just cuz ammonia is alkaline) I got a piece of mopani driftwood. I saw a plant in one of his tanks that looked like giant duckweed. I had decided not to get any plants until the tank was more mature, but duckweed is so hardy, right? And I love the colors of giant duckweed. So I asked if it was for sale. He said it wasn't duckweed-I forgot what he said it was. Its supposed to be less invasive but just as hardy. It has little geometric bumps all over it? Anyways, he looked into the tank it was in and said "oh, that's not even a portion. I'll give it to you for free." There were like 20-30 pieces though, so I was very happy.
TLR
I freaking love mom and pop fish stores.

Got the substrate yesterday and put the driftwood in. It's starting to actually look like an aquarium! I may not be able to post pictures until Saturday.

The water has been cloudy since I put the substrate in. I'm not sure if it's from the substrate, the floating fern(duckweed like stuff,) bad lighting, or a bacterial bloom. The cloudiness isn't brown, so I'm thinking it might be a bacterial bloom? That's good, right?
On a different note, I'm starting my research on plants. I'm thinking I'm going to have an anubias coffeola and maybe a couple of crypts in the back, a few bucephalandra on the driftwood, and maybe some pygmy chain sword in the foreground? I'll be dosing liquid ferts and Excel, and will be getting a nicer light.
Speaking of the light-I really don't like the lid that the tank came with. It's very flat and short, and bulky to open. There is definitely no room for a new light on it, and I want a better light to support the plants. Has anyone ever experienced neocardina jumping out of the tank? I'm considering getting a light like this: https://www.amazon.com/COODIA-Aquarium-Lighting-Controlled-Extendable/dp/B017Z6QWVC?ref_=fsclp_pl_dp_14
Or like this: https://www.amazon.com/JackSuper-Aquatic-Aquarium-Lighting-Adjustable/dp/B07FCYW994?ref_=fsclp_pl_dp_15&th=1
Or this: https://www.amazon.com/NICREW-Light-Clamp-Aquarium-White/dp/B07VHN6RG3/ref=sr_1_1_sspa?crid=1LSFI8OKMK5BL&keywords=clip+on+aquarium+light+for+plants&qid=1575386594&sprefix=clip+on+aquarium+light+f,aps,162&sr=8-1-spons&spLa=ZW5jcnlwdGVkUXVhbGlmaWVyPUEyQUlDNFdEOU5QRUZKJmVuY3J5cHRlZElkPUEySzdTVFpXSUhKR1VZJmVuY3J5cHRlZEFkSWQ9QTA5ODc0MjgzVkdJOTcxSFc3R1NCJndpZGdldE5hbWU9c3BfYXRmJmFjdGlvbj1jbGlja1JlZGlyZWN0JmRvTm90TG9nQ2xpY2s9dHJ1ZQ&th=1

To use those, I'd have to take the lid off(which I can't say I'm too devastated about), or get a glass lid, though it might have to custom made to fit the tank. Has anyone had issues with shrimp jumping out of tanks? Also, does anyone have any other recommendations for plants or lights?

Driftwood is growing a fungus, and the floating fern has new growth.

I need some tips as far as plants go- the guy at the lfs gave me some guppy grass, but I don't love the look of it, and it doesn't do best rooted, apparently... I'm thinking some red Ludwig's maybe instead? It's in the back.

I'm getting a new light and filter today! The filter is a small hob, so it shouldn't take up as much space and I'll cover the intake with pot scrubber thingies. I'll move the biological media over, maybe the cartridge too.

I don't like how big the wood is. I am going to try to cut it in half today, and lean each half against a different side of the aquarium so it doesn't take up as much of the center space.

I'm planning on getting some bucephalandra and maybe some crypts this weekend... I caved and ordered some excel in the mail, and after doing a bunch of reading, I ordered a kit of dry ferts from green leaf aquarium-the EI one.

First photo is no flash, just the tank light, second photo is with the flash to show the guppy grass. 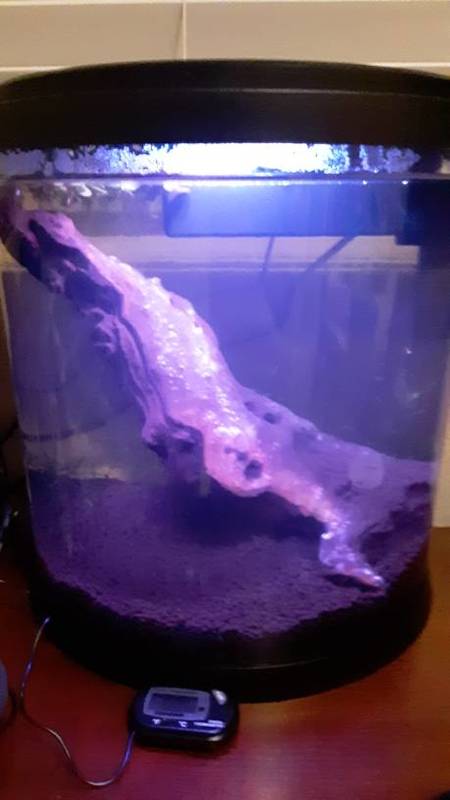 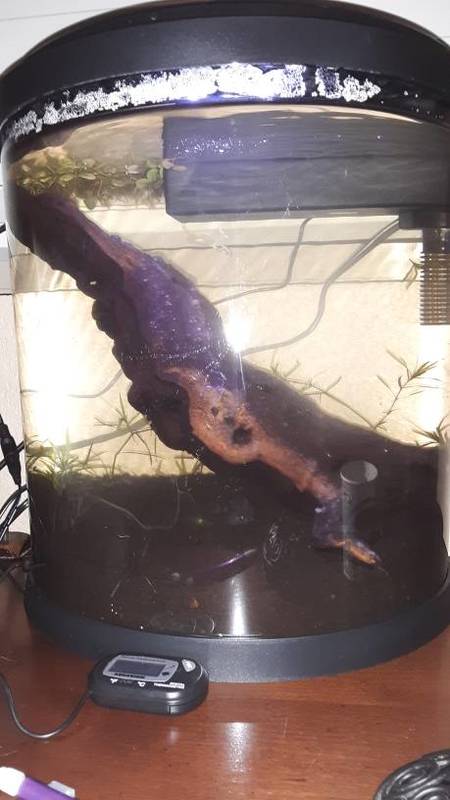 Ok, so for the wood, I'm thinking after I cut it in half, I'll let my dig do some supervised chewing if the cut ends to weather them... is this a good idea? Terrible idea? @Sien

rubysword said:
Ok, so for the wood, I'm thinking after I cut it in half, I'll let my dig do some supervised chewing if the cut ends to weather them... is this a good idea? Terrible idea? @Sien
Click to expand...

Hey did you mean dog? I would not let a dog chew on it (especially with the fungal growth on it)...who knows if it is safe for a dog/if the bacteria in the dogs saliva is safe for the tank. I would break it in half, boil it so it softens, and then file down the edges with some sand paper or something. I've even seen some wood dent/smooth down if you hammer it (and if the wood is soft enough). This might be risky tho and splinter the wood.

Ooh, good point. And yeah, I did mean dog XD. I'll probably go with the boiling and filing. I have some catching up to do with the Mandalorian anyways! Thanks so much!

rubysword said:
Ooh, good point. And yeah, I did mean dog XD. I'll probably go with the boiling and filing. I have some catching up to do with the Mandalorian anyways! Thanks so much!
Click to expand...

No problem! Looking forward to seeing what the finished tank looks like!