Hey, y'all! I will be moving soon and will be changing my setup. I am wondering if anyone has an opinion on whether Green Neon Tetras would display better in a 20 tall or 20 long tank, or if they would be more active in either tank. They're in a 20 long now and are a bit shy, but it's not very well planted at the moment (fixing once I move). I may also increase the school size once I move since they're such tiny fish. Along with the two 20s I also have a 10 if they would possibly be happier with a tank downsize and their current school size of 13. I am open to all other energy boosting possibilities as well, so any thoughts?

i could only get my hand on a 20 tall, which has some neons and rummynose in community tank (20H) and i know that would much rather have the swimming space of a 20 long. i would keep the 20 long and maybe just add more plants, hardscape if you want boost population numbers for bigger school.

I have been running green neon tanks for a few years.
Yes they can be shy. Sorry I don’t have all the answers on getting them to swim out in the open.

I have tried different combinations in different tanks from time to time. While a 20 is not suitable for a BN pleco and not suitable for a group of Siamese algae eaters ether both of these species are swimming in all my tanks that have the green neons. I have had some success with groups of male endlers as dither fish. It would seem at least 5 endlers are needed to bring tetras out?
Just recently I removed all but two endlers and that has triggered the neons back into hiding. At the same time as removing 4 male endlers I removed two large Siamese algae eaters a large BN pleco and changed the substrate plus added more wood. So it’s not surprising my green neons are upset?

My suggestion is to up the size of the school plus adding male tetras if you can put up with a second schooling species? I have Japanese blue endlers that are a similar colour at first glance from the other side of the room. 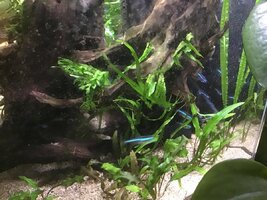 Have you tried decreasing the light intensity or adding floating plants? Many fish will feel more secure with floating plants overhead. When my Water Sprite takes over the surface of my 29g, the fish (Pencilfish, Glowlight Danios, Golden Dwarf Barbs) use every inch of the tank. Then, when I trim it back, the fish return to hanging out among the plants and hardscape below. Roots from emergent plants are also appreciated by fish, for the same reason.

Does your tank have a background? A background can help them feel more secure. You could start with something dark (like poster paper) placed outside the tank to see if it helps before you try something more permanent.