Howdy ya'll! This is the tank I've been working on since mid-December. I've taken photos every time I've changed something or added anything, and I plan to continue until I'm ultimately happy!

Start of the cycle, no plants, and lovely white sand substrate. Clean and sparkling and pretty. 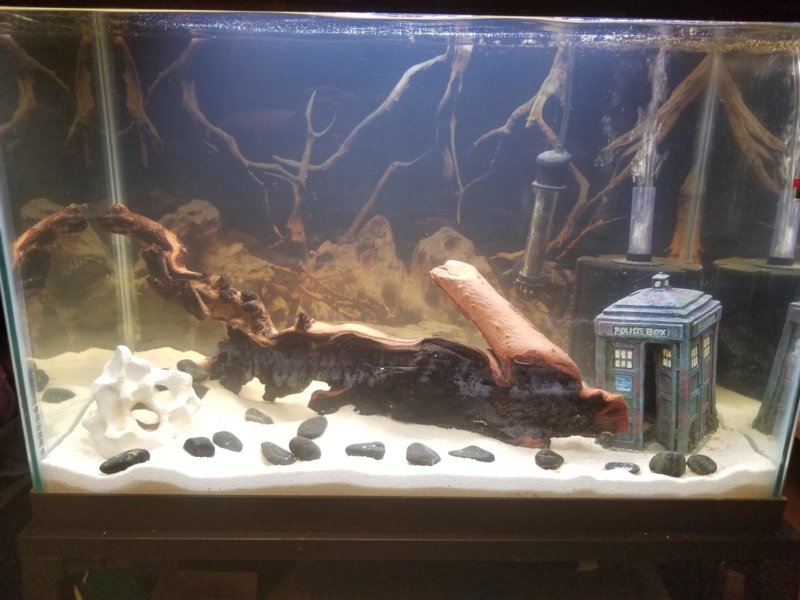 Tank cycled, so I added in a betta. Got some java fern as well; my first live plant ever! 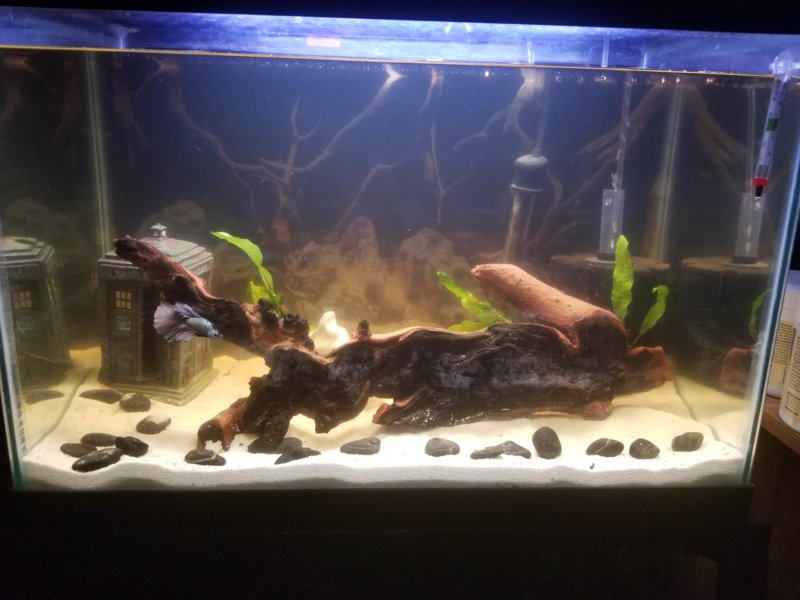 Planted Anubias Nana, Amazon Sword, and Bacopa MonnierI and upgraded to an adjustable heater. White sand is starting to look....dingy. 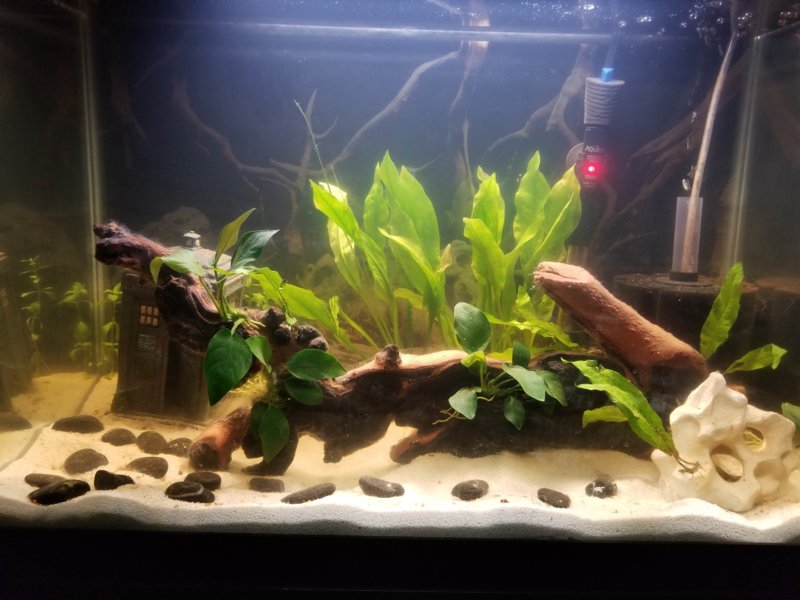 Added 6 ember tetras. White sand looks worse than ever; why did I pick white sand?? 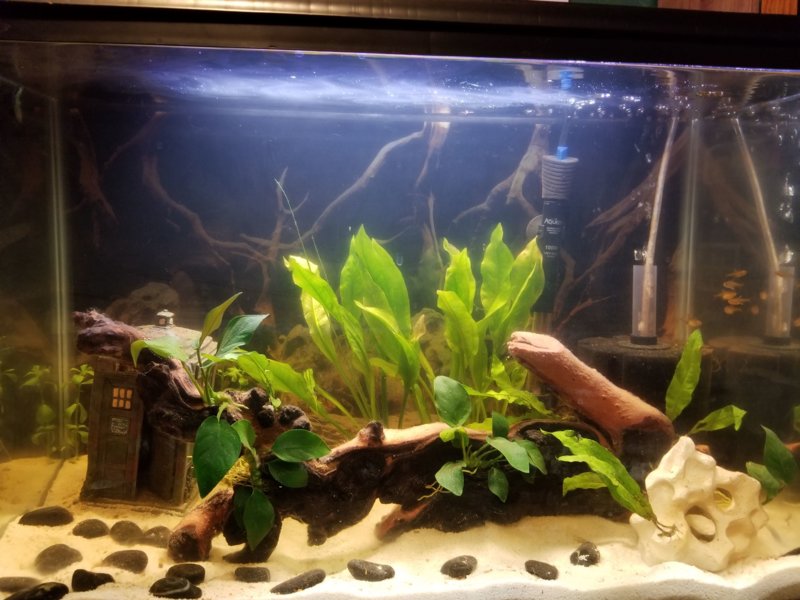 Also: There's a background because the tank sits in front of a window, and while I keep the curtains closed, I wanted a second layer to keep sunlight out. And my original plan was a completely natural tank with just rocks and wood and live plants. And then I found that Tardis and, well. It's staying until it frustrates me, but for now, I love it very much.
OP

I changed out the white sand for black blasting sand and cut the large mopanI wood in half. The large piece was just way too cumbersome, so I cut it in half and now I'm much happier! I'm looking to get some more plants to fill in the background and the empty spots on the front, but I'm not sure what kinds to get yet.

I'm also going to be adding in a nerite snail and some cory's, but I'm adding things slowly and when I decided to change the substrate, I stopped getting stuff for obvious reasons. 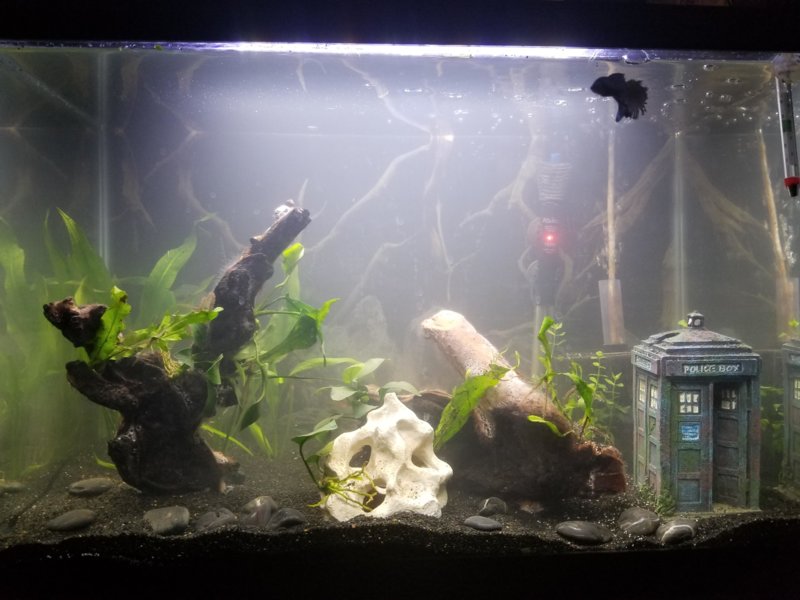 If anyone has any suggestions of easy level plants to add to the background or foreground, let me know!

Tank looks good. I like the black better than the white sand. Throw some Vallisneria in the back. It should grow nice and big for you

Looks great! I have beach colored sand in my 5g. I don't really like it much either. Poops show up like crazy. I had a Yellow Submarine in my tank for awhile. Its on my bookshelf now because I still love it.
OP

TWiG87 said:
Throw some Vallisneria in the back. It should grow nice and big for you
Click to expand...

That was one of the plants I was thinking about!


StarGirl15 said:
Looks great! I have beach colored sand in my 5 gallon. I don't really like it much either. Poops show up like crazy. I had a Yellow Submarine in my tank for awhile. Its on my bookshelf now because I still love it.
Click to expand...

That was my problem with the white! It got dirty so fast and the sand was really hard to clean well with a vac. I liked how it looked day one and then never again
And I admittedly never thought about keeping the tardis as a regular ol' decoration. I think that's absolutely what I'm going to do next week on my water change. I'm amazed that that did not occur to me, omg
OP

Not the biggest change, but I added some Java Fern Windelov, Anubias Nana Petite, and Vallisneria Spiralis (and potentially Vallisneria Contortionist; I contacted the seller and they weren't sure due to all the plants being 'infants', so we'll see when it grows up!).
The Windelov is on the left of the Y wood, the Val is all in the back (and very short right now, so it's got some growing to do), and one of the Anubius is at the top of the Y and another is on the white rock.

And also a nerite snail!

I'm very excited to see how everything grows in as the tank continues! 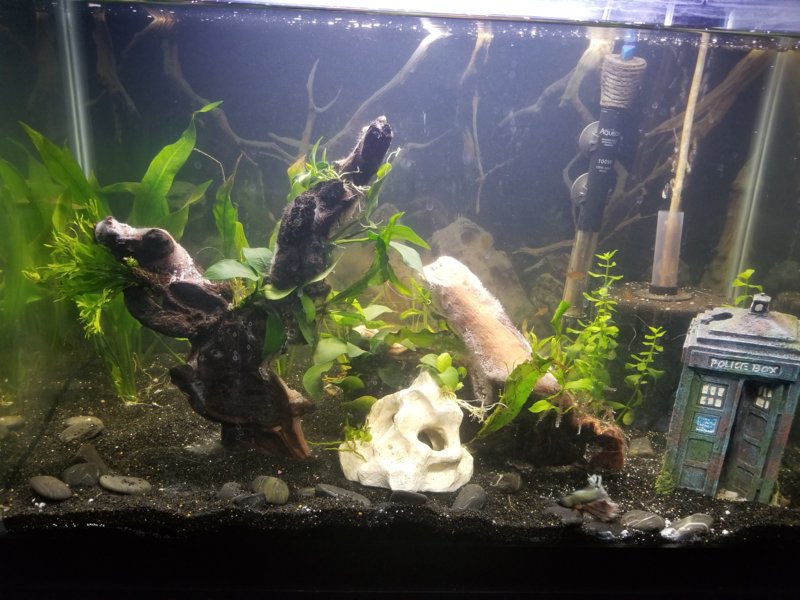 P.S. As you can see, I haven't removed my Tardis. There's a fence I'm balancing on over here and only time will tell which way I fall off -_-''''
OP 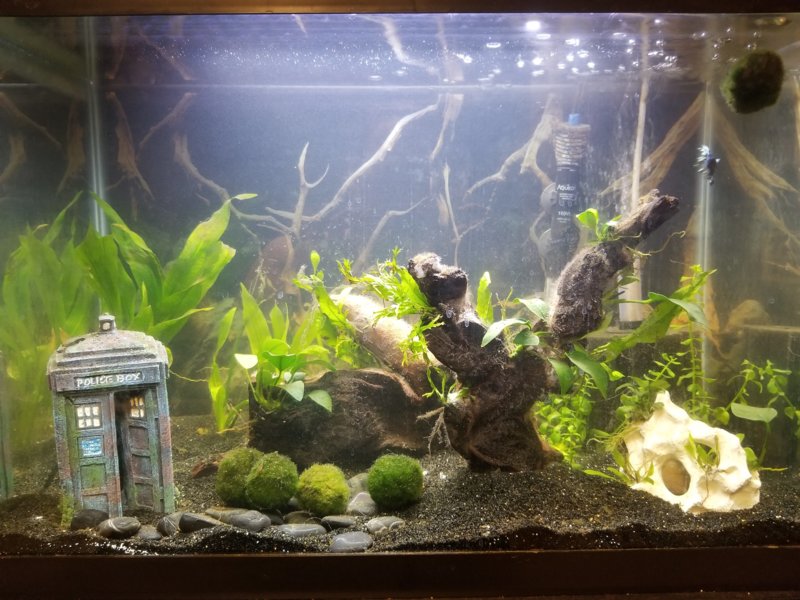 Did my water change today and decided to redo the tank. Obviously moved some stuff around, and I think I like it more this way, but we'll see how I feel about it on my next water change, ahaha.

My Amazon Sword keeps losing leaves. I'm not quite sure if it's going to survive, but some of the leaves still there seems super healthy. I'm not giving up on it yet, and we'll see how it continues to grow as times goes on.
You can't see it (it's in the back-back, behind the wood), but my val is starting to come in! It all started to die and shrink the minute I stuck it in the tank, so I was really concerned that it was a lost cause, but every plant is pulling through and starting to grow stronger leaves than when I put it in! It all looks like it's Spiralis, so the twisted ones that I originally got must have just been weird. So it goes! I'm just happy it's coming in; I had already written it off as a lost cause.
My normal java fern is doing super well; it's made baby plants that came off earlier this week and that I left alone until I did the wc. Those have now been afixed and I'm hoping they keep up the good work of their parents!
The Windelov, on the other hand.......it's not doing so hot. 90% of the leaves are gone, and not in the same way as the Val. We'll see what happens.
My aubius (both the nana and the nana petite) are all doing....moderately okay? Sometimes it looks like their growing leaves, and then other times, they're turning brown and falling off. No clue what's going on, but it'll sort itself out eventually.

I also added some moss balls - I'm going to be getting rid of 2 or 3 of them come the end of the month (I have a cousin who thinks their super cute, so I found a nice jar and she's getting some as part of a gift.) I thought I'd like them more than I do; they look weird in the tank to me, but ah well.

I had an invasion of bladder snails a week ago, and I was extremely frustrated about it. However, I think I removed all the adults (it's been over 5 days without a sighting, and I've put veggies in the tank and nothing turned up but my nerite). AND I saw a cluster of eggs attached to some bocopa leaves, so I cut off part of the plant and pulled those suckers out of there. Here's hoping that's all they laid -_-''''
You must log in or register to reply here.
Share:
Facebook Twitter Reddit Pinterest WhatsApp Email Link