Well everyone I am going to keep a running journal of my adventures with my new 125 gallon reef ready tank and a 75 gallon sump.

Story starts with this... I got irritated at my current 120gal tank because the pervious owner scratched the glass on it with God knows what, which always makes the tank appear cloudy. So I found a new to me 125 gal reef ready salt water tank. Dimensions are 72 inches long by 19 inches wide and 23 inches high. The tank is set up with four 1 inch returns and a drain box with three 2 inch drains.

Then after we get the tank home I found that I had the dreaded zebra muscle infected minio balls. Which has accelerated the setup of the tank. The tank passed the wonderful make sure the 125 gal tank holds water in the yard test before you bring it inside. Plus cleaning the tank outside is way way easier. Currently the tank is sitting in the house on it's new custom stand to insure that my four huskies can not use the sump as a water fountain.
Solution
We did that purposely. Trying for the look of where shore meets the river and where a sand bar is. Eventually Mr Harry will have the gravel all mixed up. We found out he likes to dig no matter what we do for a cave.

Well guys I got the 75 gallon sump lined up and started plumbing everything from the drain bulk heads down to the sump...ran into a small issue.

The issue is that when you are connecting a threaded pvc joint DO NOT USE TEFLON TAPE! The joint needs a pvc joint compound. Needless to say plumbing the drain lines at 11pm and having one of those doh moments because I have done tons of pvc joints when I use to run long haul fiber optics. I accidently used Teflon tape for the joint and I found out one of the joints is leaking a bit.

I figure you guys would love to see the tank so here it is outside being water tested. Ignore the scrap lumber in the back ground the wife got a new pantry and I got a fish tank kinda thing. 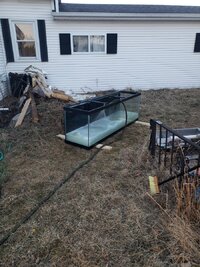 Small update. Water checked the 75gal i got cheap...it had a hair line crack in the corner...had to grab a new tank, at least petco had their tanks 50% off. Scored a 75 new for $104...cut the baffles and silicone them in. And cut out one of the tanks vertical seam seals because it looked like an issue waiting to happen. Just waiting for the silicone to cure now...hopefully their is water in the tank by end of week....

Oh note to the future custom sump builders get the 1/2 inch acrylic for baffles above 12inches wide. I used some skinny acrylic for my baffles and ended up adding bracing to keep them from bowing too much.
Upvote 0 Downvote

The seam reseal went awesome and the new 125 is holding water like a champ...the 75 gal sump is hauling water thru the system wonderfully well..

I put three Danios in the tank this morning before leaving for work. They looked like they were having a ball for three danios and 125gallons to themselves...I was wrong the three of them decided to go to the water park fun ride into the sump. My wife just called me and they managed to find their way all the way to the last compartment of the sump, next to the return pump.
Upvote 0 Downvote

Big update...the 125 is fully running. All the fish have been moved into the tank from the old 120 with zebra muscles.

Had to get a mesh screen for the overflow box. The Danios kept using it as a water slide. Not really sure how many went on a wild ride to the sump.

The DYI sump need a few modifications but for the most part I am extremely happy with it. Waiting on my poret filter sponges to show up... 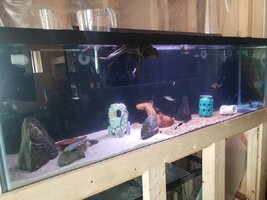 Time for an update. The tank is doing awesome except. Mr Harry the common pleco has decide that his new favorite pass time is to dig in the sand. Guess I'll be moving a few things today to make him a better cave. Added a few plants and 16 Rio tetras.

The sump baffles are going to need to be replaced eventually. A couple of them have came loose but I was able to brace them. And I should have used thicker acrylic. Not to worried on the baffles i am going to replace them because i have to replace the drywall on the wall where the tank is so everything is going to need to get moved for a weekend.. But I finally got my poret sponges installed in the sump in a vertical fashion. Going to see how this works long term. 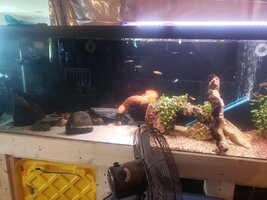 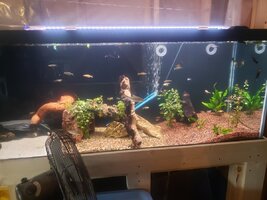 Tank looks great!! Shame you couldn’t decide on what type of gravel to use .
Upvote 0 Downvote

We did that purposely. Trying for the look of where shore meets the river and where a sand bar is. Eventually Mr Harry will have the gravel all mixed up. We found out he likes to dig no matter what we do for a cave.
Upvote 0 Downvote
Solution
You must log in or register to reply here.