I've already done a lot on it so we'll be posting multiple steps in a row and then will be back on schedule. It is a sorority with my young girls in it, and young females just reaching selling age. Looked really sloppy with the fake plants, and live is better especially in a fry tank lol.

Right now I've got 50/50 play sand Fluvle stratum substrate, about a 4th inch. Bunch of fake plants. Sorry for the funny photo, had to take a pic of my tablet screen. Tablet is broke and unable to send from there.

About a week later. Added substrate. Min of half inch in areas and max of 2-3 inches. Took out fake decorations. Added in Seiryu stone and spider wood. (Purchased everything for this build from Mcasella except for substrate, and a couple plants, definitely recommend them!)
Filled tank up, will be doing a bunch of water changes..

Less the a week later. I can see improvement and algae is pretty much gone!! So yay for that lol. I changed the light to a brighter LED as ill be having floaters and want the light to get through.

Wow, looks exciting! Can't wait to see as it goes along!

Got a tun of Dwarf Water Lettuce from StarGirl 's giveaway. Beautiful stuff. Very happy with it. Put some in the 10 gallon and the rest in my tubs. Not done unpacking it yet lol, THERE IS SOO MUCH! X=D

Got some plants from my friend yesterday. Giant Duckweed, Octopus Plant, RRF, and an unknown floater (update: salvinia minima lol. Also an update pic on the tank.

Merged my posts and pics lol..

Cleared up really well so far. You can see things a little bit better now. I'll add a few of the bettas back in later tonight after I feed them.

4 bettas added in to keep up high bb. Cleared up some more.

All cleared up. Moss is starting to attach itself and subwassertang in getting bigger. Alot of evaporation so I'll need to top it off. Tiger lotus is sending out new leaves and damaged dying ones are getting cleaned up by the snails. Any algae left is slowly disappearing. The Aponogeton is growing like there is no tomorrow, I'll have to trim. Octopus plant is doing well. Hygro could be better. I'll have to dose with more ferts. Got a weird little sprout in the tank. Absolutely no idea what it is lol.. (Pardon the 1 eyed cory in the sprout pic. He was like that since I got him.) Floaters are sending of tuns of new roots. Loving the variety.

Added in a new fake log. RRF all died idk why. Everything else is doing good. 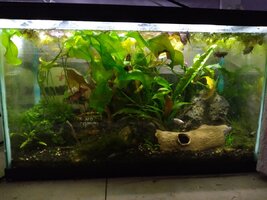 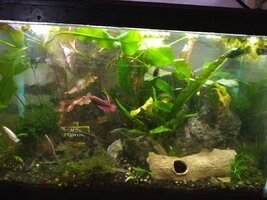 My birthday is coming up very soon, so I'll have some spending money for this tank. Forgot to put the moss balls in my box among the 50 plants I ordered lol, so I've got an excuse to add more plants on since I'm already having to redoshipping lol. Getting a variety of mix stem plants, so I'm super excited for that. Not all of them will fit in the 10 gal, so ill be starting a 5 gallon build with live plants.. I will also be getting a black, or some type of greanish live planty black background for the tank.
You must log in or register to reply here.