I just took this 10-gallon tank and took a chance to try out some aquascaping! 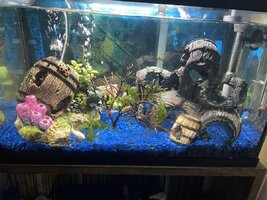 I had leftover Fluval Stratum from a 5-gallon betta tank I just upgraded to, bought a bit more so I'd have enough for this tank, and got a few extra plants as well! I already had an Anubis and a Java Fern in this tank (had some subwassertang too that I got rid of and a piece of dwarf sag that I changed my mind about using for carpeting). I bought some Staurogyne repens and a Narrow Leaf Java Fern that ended up being easily split into two ferns. I took the greenest bit of some dying Monte Carlo from my 5-gallon that wasn't thriving as well attached to wood and tied it to a bit of mesh in the hopes that putting it in the substrate in this tank might get it started to carpet (otherwise I'll get some fresh ones). Then, I got some dragon stone and set it up, realized I had some leftover white sand, and made a river down the center. Then tossed in a tree-shaped manzanita that I will add some java moss to from my sister's tank later. Substrate might be a bit deep but it's holding down plants well and I like how it turned out! 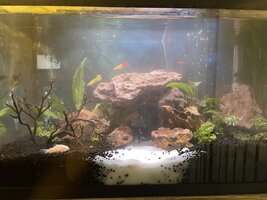 Love it! That looks awesome! You should put it in the tank of the month contest in November.

Definitely unique. You did a great job!

This is the tank now that I've added some java moss to the tree part. My cory have been loving it, as you can see by the mess they made with the stratum in the "river" section. And I just got a small CO2 kit to get the plants growing a bit better. Now that it's all set up, my mind is screaming to change it to add more plants, lol 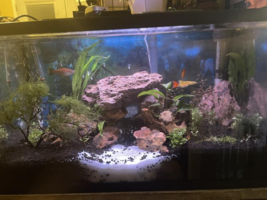 B
Switching from gravel decor tank to planted aquascape