This is the newly scaped 10 gallon tank (getting a new stand soon) with water sprite, some water clover I can’t identify, dwarf sagittaria behind and to the left of the rock, micro chain swords in the crook of the elbow shaped chola wood, and then a minI field of anacharis that I plan on it reaching the top of the tank in a really think, tall and lush forest. As for the plants I plan on buying soon, I want to get some floating plants, specifically water lettuce and duckweed/salvinia. This would look really nice with the lettuce in the center of the tank and the salvinia growing around it, and would also put the Paradise Fish at ease with a medium to build his bubble nest while also making him feel safer with the subdued lighting. Equipment wise, I have a standard T8 light fixture with a cheap (but seemingly effective, especially since these are lower light plants) garden/aquarium bulb from Lowes, a Danner AP-3 air pump and tubing which is powering my sponge filter while also having less flow, which the helps the Paradise Fish build his nest without risk of being blown away by rough currents, and finally a Interpet heater rated for 5-10 gallon tanks I bought from Walmart. Surprisingly the heater is effective and ranges from 68-93 degree temperatures. As for potential tank mates, I plan on getting 3 or so otocinclus to combat the algae that is growing on the walls and on a few plant leaves and then 15 or so ghost shrimp to act as a little clean up crew. Since ghost shrimp are cheap and readily available (not to mention hrady, given that my source is a good place to buy) I won’t mind if they potentially breed or end up as a snack for the Paradise Fish. Any snails that somehow survive the wrath and hunger (a little over the top, I know) of the Paradise Fish are welcome, too. Food wise, I’m feeding bladder/ramshorn snails, crushed if they are too large, the hydra that is in the tank (worm looking creatures that have stinging tentacles) which the gouramI family are famous for eating, Omega One freshwater flake to help him look his best (tip from a wise amature; feed carrots to any feeder animal, whether snail, shrimp or fish to naturally enhance his color), and the numerous platy fry that are soon to appear in my 30 I took him from. (He was constantly stressed out from the constant movement of the danio school and the corydoras catfish he was with. He started losing color and hiding most of the time, and now he is much more active.) Space wise, the 10 gallon is all he needs, as paradise fish are usually very still and inactive until feeding time or exploring. Here is a (sadly low quality) photo of him in his tank; 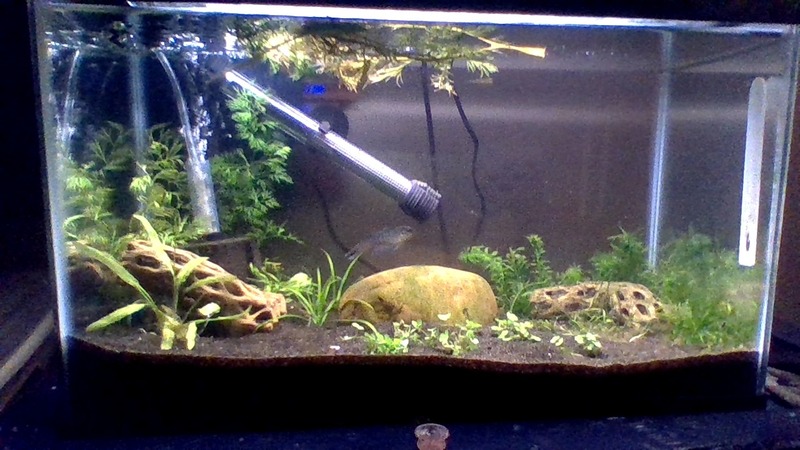 He likes to hang out under the heater and above the rock. For those who might be saying “he doesn’t need a heater”, you’re right. I just prefer keeping the tank at a constant temperature that isn’t changing, which is a problem heaterless tanks have. If the temperature changes constantly, or ins’t stable, it can lower the immune system of your fish. -also the plants like it, too, I believe. I keep the tank at about 73F, give or take a degree. Thoughts? I feel pretty proud of the scape and design despite all the plants and all hand-me-downs or not bought myself. Soon I’ll start my next tank and the new (somewhat stressful) adventure. Thanks, FriarThomasIII.

Thanks! Sardine is really likeing the set up, especially where he has so many hiding places and plants to hang out in

Funny you say that; I actually had a breeding pair of mystery snails, the female was blue but had a shell mantle collapse and had to be euthanized, the male golden. Once the babies get to a nice size and won't get eaten by the Paradise Fish, I plan on putting a few in there. Driftwood wise, I'm going to get a few pieces and boil them for awhile in hopes the sink. The pieces I have just don't end up sinking, even after boiling and soaking for days.

you can drill and glue in fishing weights (not lead) to keep it down if you are inpatient. you could also bury it in sand and use rocks to hold it down until it soaks up enough water to sink on its own.