If you have seen small white spots on your fish, and have seen it bumping into decorations, it may have been infected with a parasite known as ick (ich, white spot).
We are going to discuss the lifecycle of the ick parasites, which medication to buy and how to dose your beautiful fish properly!
Because my goldfish have recovered from an ick outbreak before, and I simply wanted to help other people here to defeat this common, deadly parasite like I did. Without treatment, this parasite could result in 100% mortality in your aquarium. But don’t worry- it is completely possible to save all of you fish. Pay attention, and together we can rid your tank of those invaders!


The Lifecycle of Ick- 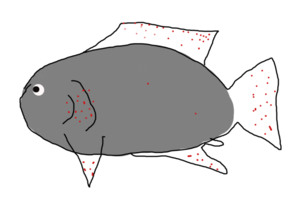 The ick parasite (ich, white spot) has a simple life cycle but that doesn’t mean it can be killed any time in its life cycle. The first stage is the physical appearance of small, sugar grain sized white spots on you fish. They will most often appear of the gills, fins and tail because that is the softest tissue and the easiest for the ick to catch onto.


Your fish may begin to scratch/bump into the tank’s sides and decorations to attempt to get the parasites. However, these may be symptoms of amyloodinium (saltwater disease), irritants in the water (could cause fish to rub on surfaces) or other parasites such as flukes.). Sometimes, your fish may exhibit these behaviours, but you may not be able to see the spots. If this relates to your fish, it may be because it has been infected with ick, but they are hidden away inside the mouth or gills. The most common cause of death from ick is when the parasites attack the gills, limit its oxygen, and will eventually suffocate the fish. A sign of limited oxygen this would be your fish gulping at the bottom or surface.

Now, once the ick has a firm grip on your fish, it will grow a protective cyst over the top of it- protecting itself, and also making it impossible to treat with any medication.

But do not worry! All hope is not lost!

After a few days the ick will have completely dropped off your fish. The speed of the life cycle is temperature dependent- the warmer the water, the faster the life cycle. It can take any time from days to weeks, so it really depends on your aquarium’s temp. Roughly, in tanks 84°F and up the lifecycle is about four days. 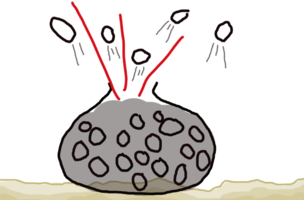 Ok. So second stage: the ick have completely dropped off your fish onto the gravel/sand below. This is when most people think they are in the clear. But while the ick is down there, it is sneakily multiplying into the thousands. At this stage it is called a trophont, but we don’t really need to know that.

What we do need to know is stage three! The most important and most dangerous!


You see, if you introduced a new fish into your aquarium that already had ick and had not been properly quarantined, it would have not been immediately harmful to the other inhabitants in that tank. But once the ick falls off and multiplies, they explode back into the water. Becoming free swimming and can attack each and every one of your remaining fish.
Finally, this is the best/only stage in which we will kill this parasite and eradicate it from your tank forever! Because the young parasites are weak, and only have 24-48 hours to find a host, or they will die.
Now we will discuss how to treat this.

How to Treat Ick-

Now you understand what is happening, we will talk about the best ways to treat your fish.
First- having an airstone in this situation would be great in this situation- bubbles rise and burst on the surface, creating waves, creating greater surface area. Creating extra oxygen for your fish with ick on their gills who will be struggling to get the air they need. Don’t worry if you don’t have one. 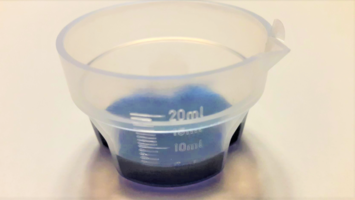 Drain 50% of your water and siphon the gravel/sand to remove as much ick as possible (you will never get all of it, but this will certainly help).

Re-fill your aquarium and follow the instructions on your medication for the amount it recommends. Also, this website is good for calculating the amount you need to add for your volume of water: Interpet - Dosage calculator

Spread the dose of medication around the water, and also add some into the pump. It will be probably be blue, but don’t worry there’s nothing inside that can harm your fish.
Repeat in 48 hour intervals with a 25% water change. Depending on on the severity it could last anywhere from 3 days to weeks.
I had to treat mine for under a week with 2 doses, but everyone will be different.
The medication will probably come with a pipette or measurements in the lid.
Here are a couple of medications I would highly recommend:

Interpet Anti White Spot Plus 100ml (The medication I used for my outbreak. For the record: both fish survived afterwards and a happily swimming around behind me as I write this.)

Rid Ich Plus® | Kordon! This has been highly recommended before. I would suggest this for larger scale, more severe outbreaks than my own goldfish tank, but make sure you research first.


Or any other medication you think would better benefit you beautiful fish, go for it! Just don’t take risks and buy anything too cheap. Remember: malachite green!
On a serious note, no medication will work 100% of the time, but you must give your fish the best chance to recover. Without any medication, there is no doubt that they will die. Do everything you can, and it will probably be enough.


I wish you all the best of luck!