Angelfish are one of the staple fish in the hobby. Hailing from South America these fish are spectacularly stunning, each one of the three species.

The most common species your local fish dealer will have will most likely be P.scalare. These are the angelfish that come in every color of the rainbow, the phenotypes ranging from koi to half-black. P.scalare is the second biggest angelfish, reaching about 6 inches long and 8-10 inches high, and the most passive of these angelfish. In the wild, this fish is located in rivers found in Brazil, Peru, and Columbia. They can be found in many other regions. In the wild they are found in large schools. Individuals you find at an LFS are most likely tank bred and imported from a wholesaler. Wild fish are uncommon and are usually found in select dealers. 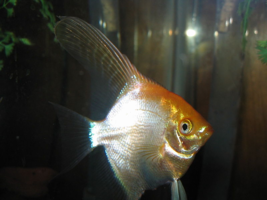 Domestic strain of angelfish, used with permission from Mitternacht90 at English Wikipedia. Taken from Wikimedia Commons


The second species of angelfish is P.altum . This species is infrequently found but is one of the most gorgeous. They are the tallest species in the genus Pterophyllum. Reaching 15 inches in height their dorsal and analfins will often become deep red. Most Altums you find will be wild-caught as they are hard to breed in captivity. These fish can be more desirable than discus in many cases. Also found in large schools these fish will be found in Venezuela and Columbia. Altums can be differentiated from other species of freshwater angelfish by their signature notch above their mouth and high finnage. 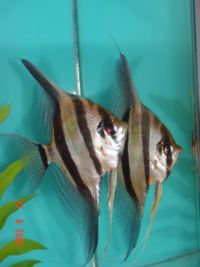 Image used with permission of the author, Puertoayacucho at Wikimedia Commons

The third species of angelfish from Pterophyllum is P.leopoldi, often called the teardrop or long-nosed angelfish and they are probably the least known, least sought after angelfish. These angelfish are the smallest and are said to be the most aggressive of angelfish. Although they only grow to about 5 inches tall they are aggressive but usually keep the bickering to themselves. This is the rarest species of angelfish and is often imported from South America. Specimens will almost always be wild-caught unless you find a private breeder. This species was also misinterpreted as P.dumerelii and is still often put into trade under this pseudonym. The appearance of this species is much more sloped and triangular than the others and they often develop blue gill plates and red finnage. 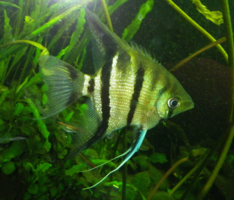 Own work by Andrew Bogott at Wikimedia Commons. No changes were made.