So, you want to make a fascinating South American biotope? A piece of the river in your home aquaria? It's not as hard as it seems to the naked eye, and you only need a couple of things to simulate one in your aquaria. 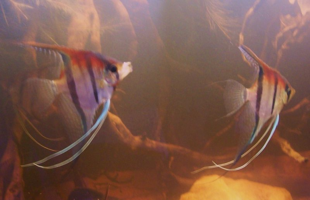 South American biotopes can be simulated in virtually every tank size available in the hobby at the moment. It is simply a design that is set to mimic a fish's natural environment. Many cichlid keepers often keep their fish in biotopes, to get the most out of the fish.

Before setting this up, I would recommend going onto YouTube and looking up footage of rivers in Brazil and other areas, to get a rough idea of what you want your tank to look like. You can also look up other's people tanks on Youtube to get more ideas. Some videos-

The substrate one aspect of a biotope. Since the focus of these builds is not plants, you don't need fancy planted tank substrates. The natural substrate of rivers in south American usually consists of natural matter of broken down leaves, branches, and silt. Since it is hard to replicate that with something like straight mud or dirt, using sand should suffice. Play sand is a common choice, having the slight tinge of brown that pool filter sand often does not have, but it really depends on the company and brand.

For the background, if you want to spring for something nice, a 3-D background of wood roots and branches etched into the side of a river is appropriate but a simple 2-D black background has the same effect.

As we all know, the base to most biotope'd aquariums is leaf litter and other botanicals. Leaf litter/bark/other random botanicals are what make up a large amount of plant matter in the Amazon basins and tributaries. In nature, the fish that live in these use them as territories, food, and shelter, so it is more than obvious to include these in a South American biotope setup. Place your leaves in a fashion where it looks like it has been scattered, and a layer of leaves along the bottom of an aquarium. Leaf litter is optional though and is certainly not needed to create a biotope, many people prefer 'clean" biotopes with everything except botanicals. But it adds to the pizzaz and the "oohs" and "aahs".

The next part of this will be some simple hardscaping. Most of it will be small river rocks( if you want to add a bit to it), small twigs, and driftwood (look for branchy driftwood). You can arrange the wood in a formation so it is sloping down from one corner to imitate roots hanging down into the water and various twigs around to imitate fallen twigs. Smaller pieces of wood can be used as 'fallen branches'.

Plants. Although these setups don't revolve around plants as much as planted tanks, there can still be a certain degree of them. Floating plants like water lettuce and red root floaters can be utilized to decrease nitrates and add more of a root feeling to the tank. Various plants like Cabomba, crypts, vals, amazon swords and ludwigia can be used but in small amounts.

For fish, its what makes it a SA biotope. You don't need to go with fish from the same basin or system but generally all from SA. It usually focuses on 1 or 2 species, at most 3 because there is rarely such diversity in a small area in SA. Most commonly is one or two cichlids of some sort and some dither fish to bring he cichlids out. No livebearers, shrimp or rasboras, etc. If you choose to venture with fish outside of SA you have a blackwater community.

Tannins. In nature, there are clear water areas and black water areas so tannins may or may not be used Try not to keep carbon in your filtration as it will erase all tannins in the water. IAL or cattapa leaves will provide extra tannins already provided by wood and leaf litter. You can add alder cones and roobios tea, to get more of a blackwater effect.

And that about concludes my simple guide on how to make a simple South American biotope setup.