One of the most commonly kept Gourami and at a glance it's easy to see why. Their striking colours could give even marine fish a run for their money ranging from brilliant reds to dreamy blues, these fish simply put are gems of the freshwater hobby. At a fraction of the price of fish like Discus they are also a fraction of the size of Discus making them more suitable for the home aquarium. Seldom will they get over 3” and anything over 15 gallons should be fine for one long term. Reading this opening paragraph you may be fooled into thinking that these are perfect aquarium fish but unfortunately Dwarf Gourami are a very sad fish and one I would wholeheartedly recommend to avoid, here's why....

The reasoning
To put it quite simply they are too popular and this has been the downfall of the fish. Their popularity has led to over breeding and line breeding in farms for specific colours, causing huge gaps in their immune systems and making them far more susceptible to harmful diseases that are common in the aquarium trade. Often we don't notice these because a healthy fish's immune system will easily cope and these diseases will only come up when a fish's immune system is compromised i.e.. when fish are stressed. This means more often than not you will run into health issues while keeping them and often these issues prove to be fatal. 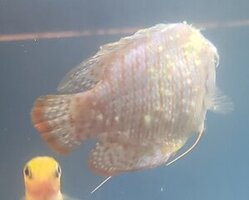 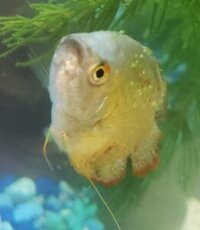 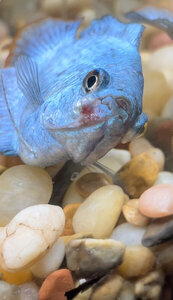 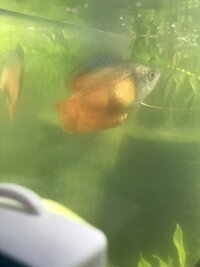 (Photo's from members used with permission)

The other issue with Dwarf Gourami is their temperament, these fish are not as peaceful as some articles seem to make them out to be. Keeping two males together rarely ends well and is usually a matter of time before one ends up dead and if not killed from fighting a weakened immune system from stress is almost a death sentence in itself. Keeping females with males isn't guaranteed to go swimmingly either. Males that want to breed can be overbearing to the point that they can kill females and males that have no interest in breeding can outright kill unwanted tank mates. Often it's recommended to keep a group of females together but in my experience they aren't that much better though definitely more manageable. 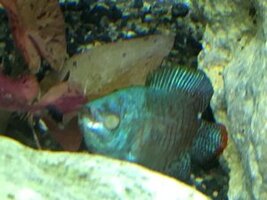 (My male after attacking and killing several females)

Sexing misinformation - a costly mistake
Females are often hard to come by, a commonly quoted reason is, early American fish trade placing restrictions on popular fish species making only one gender available as to discourage breeding in the home aquarium. They are much duller in colour and less attractive but this can be said for a lot of species. This is quite dependent on location though as in Europe they are just as common as males. This leads to males being mis-sold as females, due to lack of knowledge on how to sex them. You will see the phrase “males have pointed fins and females have rounded fins” thrown about, while it's generally true, females will have rounded fins, males also can have quite rounded fins and this causes a lot of confusion and as you can imagine if you read the beginning of the last paragraph this can be a deadly mistake.

The best way is by colour, males will be quite brightly coloured compared to the dull silvery females that show very little. Males do have larger dorsal fins that extend into the caudal fin while females do not. Powder Blues are the exception to this as both males and females have a blue colouration (females slightly paler). There is usually some strong red in males that make them identifiable but it's often quite difficult

My experience
It's sad that such a beautiful fish is in such a state but it is how it is. I cannot recommend keeping them because of these reasons. In almost three years that I have been trying to do so, I have had over twenty individuals, around ten of which were females. Most times I kept individual fish but on the three occasions were I kept groups, I can't say keeping them together was for their benefit. It has been obvious to me keeping other Gourami in a group as opposed to individually that they benefited from having conspecifics but that was never the case with Trichogaster Lalius with the exception of a group I recently kept. 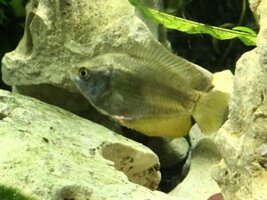 (my female that was killed by the male)

Hope!
The exception and one that I could recommend keeping is Wild caught fish. These don't seem to have the issues that I have touched on in this article and do in fact seem to benefit from having conspecifics. Choosing to stay together in a four foot aquarium rather than opposite ends, it was quite the sight. However again this is shocking how differently they behaved to their tank bred counterparts, which shouldn't even be considered the same species! They are much more like Honey Gourami(Trichogaster Chuna) than their tank bred equivalents. Unfortunately my group didn't last all that long, though it was my mistake for thinking this small wild caught fish would be fine in a large community setup, we do still have one that seems to be doing just fine in a tank of it's own. A mistake that will not be repeated if I get a second chance at keeping them. 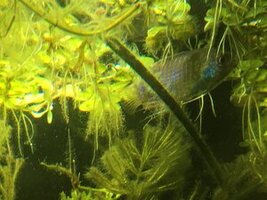 Thank you for taking the time to read my article. Please feel free to leave any criticism and your experiences with the species in question.

Excellent info!!!
Thank you so much for bringing attention to this. It makes me sad how Gouramis in general sometimes get a bad reputation because of the unfortunate state of Dwarf Gouramis
i agree. I had two dwarf gouramis die from the disease- I wish i would have read this before I got them.
Completely agree with everything in the article. Sad truth regarding Dwarf Gouramis.
This should be a requirement to read before purchase if contemplating a DG for a community tank!! Well done!
Amazing. Discusses information that so many hobbyists need to know!
Top Bottom