My experience with Kribs

One day i walked into my local fish store and discovered they were breeding kribs and had several hundred for sale at an inexpensive price. I skimmed a couple of articles trying to determine temperament for my setup. Thinking they were similar to south american dwarf cichlids I purchased 5 juvenile (2 males and 3 females).

However I quickly learn that even as juvenile these are not gentle community fishes and are quite aggressive. It took them a week to kill several cory (pygmy, orange laser) and remove several guppies' tails. I returned 3 of the kribs and kept one male and one female.

The pair had constant fights for about 3 weeks when they dug a hole under a piece of drift wood (noticed the unharassed apistogramma poking around): 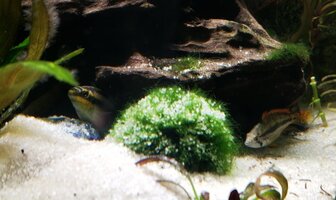 At this point they seem to settle down and left most of the other fishes to their devices.

I presumed they were nesting but was unsure if they had actually spawned. About 3 weeks later i saw the parents caring for their frys: 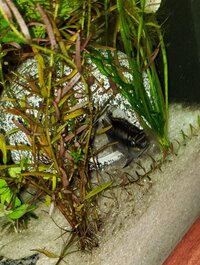 They maintain the original cave and at night return the frys. They will chew up some food and spit it out among the frys and generally keep the area around the fry clear. While the frys might appreciate some dedicated food; I have found feeding not required as the parents make sure they are adequately fed.

One interesting thing that developed overtime is the kribs learned pygmy cory were not a threat and stopped abusing them. They even allow them to mingle with the frys uninhibited. Because the area in front of the krib cave is kept cleared the pymgy cory learned to collect there everyday since no other fish in the tank would disturb them.

After about 8 weeks the kribs stopped carrying for the current frys; weakly chased them away and a few days later the process started again with a new set of eggs. The 1st set of frys are now in the range of 1/4 of an inch and not likely to be eaten by other fishes in the tank. Approx 1/3 of the fry made it to this age.

My plans going forward is to remove the male to stop breeding and let the female care for the 2nd set of frys. When the first set become large enough to create an issue they will visit the store. I will likely purchase another male or keep a male fry for when I have space for additional tanks as their behavior is quite amusing and I want to gain a better understanding of this behavior of recognizing non-threats.

I highly recommend a pair of kribs but would suggest a different handling if you were to venture this route. A 20 long should be sufficient for a pair. Top dither fishes are mostly safe. I have kubotai rasbora in this tank that stay near the surface and the kribs rarely if ever acknowledge their existence though I would suggest something slightly larger for your tank. They generally ignore pleco and otto but i would avoid low fishes or fishes that like to pick food off the bottom such as cory, kuhli loaches, guppies and similar.

Given the extensive raring behavior these would be excellent fishes for the class room.

Some similar fishes that I have not tried but are said to be of a more peaceful nature include pelvicachromis subocellatus and pelvicachromis taeniatus and will update this article when i have a chance to experiment with them in a few years.

[Expect inline revisions as well as major updates in the future.]