Comparison of Both Species in the Genus Mikrogeophagus

So, you say, you want to start keeping cichlids? Eh? You want some that are peaceful you say? And small? And easy to take care for?

Well, welcome to the wonderful world of ram cichlids!

~What is a Ram Cichlid?~
Rams are fish that belong to the genus Mikrogeophagus. Literally translates into "small earth eater" I believe from greek [or latin], Mikro translates to small, geo to earth and phagous [nope not a typo] to eating. These fish are what their genus says. They uptake mouthfuls of sand into their mouth and filter it through the gills, or sift it in their mouths, hence "earth eater", to find bits of food leftover in the sand. Very cool to see. There are only 2 fish species currently described in the genus Mikrogeophagus, and they are the Bolivian ram, M.altispinosus, and the German Blue Ram, M.ramerizi . You may come across names like the 'red ruby ram' and the 'butterfly ram', those are just more names of the two species. Both species max out at about 3 inches for males and slightly smaller for females.

~The Bolivian Ram~
Ah, the Bolivian ram. My favorite out of the two species. The Bolivian ram's colors start on a brown or tan base and build up with hints of blue-green and a black dot on both sides of the fish. 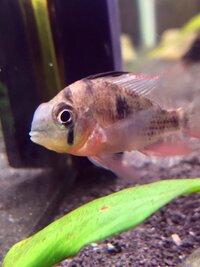 Above: Adult male, notice the pointed, puny vent. Picture made by me.

The Bolivian ram is a very peaceful cichlid that is although it does not boast as much color as the German blue ram, it still has enough color to compete with apistogrammas, showing off the bright sunny orange when in breeding dress. They will follow you as you pass the tank and will beg for offerings from the little tin that has granules of whatever food you feed it.

And surprise surprise! This ram is a subtropical cichlid, with preferred temps ranging from 74-78.

Males will never fail to bore you as they spar with each other rarely causing damage and competing for females, and often two males will end up in a lip lock over territorial disputes, and the loser loses the prized territory.

This spectacular, personable and hardy cichlid is almost always the way to go when starting out with cichlids. They will never bore you.

~The German Blue Cichlid~
Obviously one of the most colorful freshwater fish on the planet, the colors are shown on german blue cichlids are rivals to marine life with all the colors of the rainbows on it's side. The German Ram often commands a higher price than the Bolivian, for the fact that it is much more sought after than the other counterpart. This species is a lot shyer and prefers to be in groups. best to build the tank around this fish, and stock it with slower, smaller fish. Even with it's shyness, in the right conditions, it can the most active fish in the tank. Males will court females and the breeding dress of this fish is spectacular during the performance. This fish is also a common tankmate to discus. 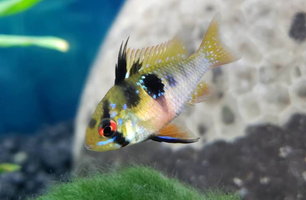 Juvinile GBR, note vent is not shown. Appears to be female at first glance. Picture provided by @StarGirl15, used with permission.

There are several different phenotypes of this cichlid like the purely dark one, the gold ram, the electric blue ram and very unheard of, the red headed gold phenotype which I would love to get my hands on. There are also some body morphs like veiltail and ballon rams.

This cichlid is at the other end of the temp spectrum than its cousin, and it prefers waters over 82 degrees Fahrenheit which seriously reduces the compatibility of this fish with other fish. These fish also have the reputation of being picky eaters, sensitive and fragile, which can be true on occasions but can be completely ignored if you get your fish from a reputable breeder.

~Which Should I get?~
Depends. Looking at cichlids for the first time? Try bolivians. A bit more experienced? Try GBR. Both are fairly hardy cichlids and both are beautiful under the right conditions. Consider temperature when incorporation these fish into a stocking plan.

~Final Words, then Adios!~
No matter which one of these fish you decide to take under your wing, you won't regret it. They will shed a whole new light how you see fish, and they will never fail to amaze you. Both of them are showstoppers at color and will never bore you. Whichever one you choose, remember to do research and consider temperature when stocking your aquarium.

Feel free to contradict me if you think anything in here is wrong at any level.

Really loved the article! Very informative for someone just discovering the wonderful world of Rams!! I did not know a lot about the Bolivian Rams, so that was really helpful! I'm finding that my new GBRs are also following me (particularly the male) and they have such a unique personality. If I start up another tank, I may just have to make it a Ram only tank.

How many do you think can comfortably live in a 29 gallon by themselves or with some smaller tetras?

Very thorough article, but would love to have seen comparison of how they do with different tankmates.

FinalFins
Thank you for reviewing!

In a 29 gallon, for both, the most I think you could put in would be probably 4, and move out any fish that pair off if they get too aggressive

Thanks for the suggestion to compare temperament! I will consider adding it for the next update.
Upvote 0 Downvote
Very good article Final! Reasons for 4 stars: The bolivian ram usually has red on it. Usually in the head. While GBRs like 82+ they CAN be kept at 80. You didnt tell us what gH or pH that either does well in. You also didnt tell us where the origin of them. While i onow all of this info some people wouldnt. Good job!

FinalFins
Hi, the reason I didn't include those conspecifics is because this wasn't meant to be a species profile, more of a comparison of the species, and which one would be better for you.

And Bolivians don't have any red in the head, it's only in the fins :)

I can't comment on the 80-82 because that's such a controversial topic, but personally I think GBR will do a lot better at 82+
Upvote 0 Downvote
Top Bottom