No permission to download
Betta albimarginata Care and Breeding

The two most common localities Betta albimarginata are sourced from are Malinau and Sebuku in Indonesia, although collection has also occurred in Malaysia. The fish inhabit shallow (5-10cm), blackwater forest streams with slow flow and plenty of cover in the form of rocks, roots, leaf litter, and plants. The Sebuku-collected individuals tend to be larger than their Malinau counterparts, but the species generally obtains lengths between 1 to 2 inches and live 2 to 3 years in captivity. These fish are classified within the Albimarignata complex, under which a similar species, Betta channoides, can also be found.

Betta albimarginata are also known as the “whiteseam fighter” or “strawberry betta” for the bold breeding coloration of the males, which consists of a reddish orange with fins lined with a band of black, followed by a seam of white. Both males and females can change color drastically according to their mood; female coloration ranges from ash gray with two black stripes and clear or black-flecked fins (neutral mood) to black or dark brown with a tan dorsal region and rust-colored fins with faded black edges (breeding coloration). When in breeding coloration, both sexes may develop rusty vertical bars along the side of the body. Submissive or stressed males can also change their patterning to closely resemble the stripes and washed-out grays of a female. 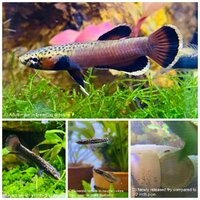 Although this species prefers low pH, hardness, and TDS (Total Dissolved Solids) levels, they are adaptable and can live and breed at a pH of 4.0 to 7.6 and gH of 18 to 100 ppm. Acceptable water temperatures range from 70F to 85F (21C to 29C), with cooler 70’s preferred, although spawning and more intense coloration is triggered at 75F (24C) and above. Temperatures around the mid 60’s are noted to be lethal for some fry.

A pair or trio of 2 males and a female can be housed in a heavily planted 10-gallon tank, while a group should inhabit 20+ gallons. A tight-fitting lid is crucial, as they are excellent jumpers and can aim themselves even through holes the size of a dime. Although generally peaceful, dominance displays and short bouts of aggression are common amongst a group. It is important to maintain a ratio of 2 to 3 males for every female, as females of this species are more aggressive and assertive.

Betta albimarginata are safe for community tanks of small, calm species that are unlikely to outcompete them for food; however, especially tiny critters, such as small fry and young dwarf shrimp, will be eaten. Wild-caught individuals are initially reclusive but become more outgoing once used to their new environment; likewise, captive-bred fish tend to be confident, outgoing, and interactive.

In captivity, any live foods small enough to swallow are eagerly hunted. Frozen meaty foods (brine shrimp, bloodworms, etc.) are also commonly accepted once the fish recognize it as edible. Some individuals can be weaned over to processed foods, such as flakes with a strong scent, but the species generally seems to maintain a better weight when fed frozen and/or live foods.

Both an increase in temperature (75F and up) and sunrise appear to trigger more intense spawning activity, although the species will also perform breeding attempts throughout the day and at lower temperatures. A mouthbrooding species, Betta albimarginata males are responsible for egg incubation. Typically, a female will initiate courtship, upon which the male will intensify his coloration, inflate his throat, and shiver his outstretched fins at the female. If she finds him acceptable, the pair will complete practice embraces before spawning, during which the female releases eggs on the side or analfin of the male, then transfers them to his mouth, repeating the process until all eggs are fertilized.

The male will hold anywhere between 3 to 40 eggs over a period of 10 to 21 days without eating, with shorter incubation times at warmer temperatures. Periodically, he will flush his mouth with water to oxygenate the eggs and prevent fungal infections. Occasionally, an inexperienced or stressed male will swallow the eggs before fry can be released. Adult groups – sometimes even the parents – will predate fry, so the best yield is obtained by separating the male around the 7th day of incubation. Unless the fish are being kept in a group, the father should be given 2 weeks in isolation to recover his body weight, as otherwise the female may continuously breed him until he starves to death.

Fry emerge darkly-colored and free-swimming. Their rearing tank should have a lid to trap moisture so that their labyrinth organs develop properly. They are fairly large and are able to feed on baby brine from the get-go. A good mix of meaty live foods (baby brine, micro worms, etc.) should be offered 2 to 3 times a day in the first few weeks to ensure all individuals are obtaining proper nutrients. Small organisms growing on decomposing leaves in the aquarium can also act as a secondary food source between feedings. After about 2 months have passed, a transition from live to frozen foods can be obtained by offering frozen at one feeding time and progressively smaller amounts of live at another, gradually phasing frozen items into the primary food. Adulthood is reached after 6 to 7 months.