Activated Carbon for the Aquarium

Activated carbon for the aquarium is a form of carbon that is usually made from bituminous coal, lignite or wood. It is often abbreviated as AC on the forum. The primary use of activated carbon, or AC, is to filter the aquarium water of foul odors, yellowing compounds (DOC) and to remove medications from the water column.

Some hobbyists use it regularly and some don't use it at all. Some swear at it and some swear by it. I'll try to give you the basic info to get you started and you can decide for yourself whether or not you think it's something you will want to use. 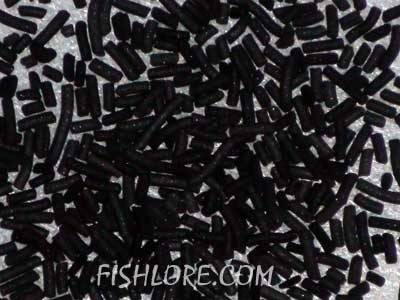 This carbon comes in various shapes and sizes and not all AC is equal. The most common shapes are granules and pellets. There are powder forms as well, but those are not used in aquariums. Generally speaking, the more porous and lighter the carbon the more surface area it has for adsorption thereby making it more effective at filtering the water. Many tap water filters are made to use AC and it does a great job at removing odors from the water. This can apply to your aquarium as well.

What Does Activated Carbon Do?

AC is mostly used to:

If you go several weeks in between water changes you or your significant other may start to notice a smell coming from your aquarium. Pop some AC in your filter and the smell will go away rather quickly.

If you're running a reef tank or planted aquarium and you want to get the most out of your light you can also run AC to remove yellowing compounds from the water to increase light penetration. Use with caution though. You don't want to start using a bunch AC in your sump or filter because it could lead to light shock for your corals. This would depend on how yellow your water was to begin with. AC can really make a big difference in the clarity of the aquarium water.

Try looking into the side of your aquarium. Can you easily see through the other side? If not, you may have a lot of dissolved organics or yellowing compounds in the water and AC can clear that up for you.

If you have recently purchased fish and you are medicating them in a quarantine tank you may want to run some AC to remove the medicine from the water column after a treatment period. You should also keep this in mind when starting medicinal treatments. Remove the AC from the filter beforehand, otherwise it will remove the medicine from the water column doing you no good. Freshwater planted tank keepers that use fertilizers with their plants sometimes refrain from using AC because it is thought to remove the fertilizer from the water column. Some say that the plants will use up the fertilizer before the AC will. But, how do they know that for sure? I would personally take the AC offline when using any kind of supplements to get the most benefit from that supplement. Bring the AC back online once a period of time has passed and you think the supplement has done it's job or you think enough time has passed.

What Is A Good Activated Carbon?

I'm not going to recommend one brand over another. I will however tell you what I personally look for after having used AC for years in all of my aquariums. The first thing I look at is the particle size. Too small (less then 2 mm) in size should be used with a media bag of some sort, otherwise the small particles will be all over your sump or aquarium. I use AC in my media reactors (I use TLF phosban reactors. I usually buy acid washed (hydrochloric acid washed) carbon because it has the smallest amount of phosphate and it has the smallest effect on pH. I've used both pellets and granules and both work well. The pellets allow for better flow through the reactors but the granules supposedly have more surface area making them last longer.

When comparing multiple brands of AC you'll want to compare weight for a given volume. The lighter the AC, the more porous and the better it will be. The lighter acid washed carbons are more expensive too. There are some good videos on youtube that will show how effective one type or brand of AC is over another. Research them before buying because some brands/types are significantly better than others.

How Long Does Activated Carbon Last or Remain Useful?

This is probably the hottest topic and most often debated when it comes to the use of AC. Some think it lasts only a few days while others think it lasts months. To me though, it really depends on the application. The dirtier the water the less the lifespan of the AC will be. Each aquarium is going to be different. If you have a reef tank full of corals there is a constant release of biochemicals by the corals (allelopathy) that can have an adverse effect on the other corals in the tank. The same goes for macro algae. Macro algae can release biochemicals that can have a negative effect on corals too and running AC can help diminish this effect. There are several good articles on google scholar on this topic.

I'm not a chemist and I don't have the testing equipment available that would allow me to determine if the AC is still working after a given period of time. I would recommend changing out the AC after using it for a few weeks for most tanks but it totally depends on the bio load in your tank. The lighter the bio load the longer the AC is going to last. If you leave it in the filter too long all the pores eventually become clogged and it then becomes more of a bio filter because bacteria will start growing on the carbon.

The Negatives of Using Activated Carbon

As mentioned already, AC doesn't necessarily discriminate when removing compounds from the water column. If you're using plant fertilizers while running AC in your filter, the AC may be removing the fertilizers before the plants get the full benefit from them. Same goes for using saltwater aquarium supplements.

Carbon dust has also been implicated as one of the causes of HLLE in fish. However, to my knowledge this has not been scientifically proven. Someone please point me to the study if one has been documented and I'll update this article accordingly. HLLE is more commonly thought to be related to a dietary deficiency.

Another drawback can be phosphates. AC that has not been acid washed might leach phosphates into the water which can lead to nuisance algae blooms. You can test your AC for phosphates if you have a phosphate test kit or the Hanna phosphate meter.

How To Use Activated Carbon

I have TLF reactors on stand by if I need to use AC on my reef tank. With the TLF reactors you also need a pump and possibly a media bag if the carbon is smaller in size. I place the AC in the media bag and rinse it thoroughly under Reverse Osmosis water until all of the carbon dust is washed away. I then listen to the AC fizz for awhile because I think it sounds cool. Next, I place it into the reactor and turn the flow on at about 300 gph through the reactors. Setting the flow too high through the reactors will lessen the contact time, making it less effective in my opinion.

You can also put it into a media bag and then place it in an area of high flow and let it passively filter the water. This isn't going to be as effective as putting it into a dedicated reactor though. power filter often have AC incorporated into the actual filter floss making it a breeze to change out as needed. You can run AC in media bags inside canister filters too. The reactors and canister filters are probably the most effective ways to run AC in your aquarium since it actively (rather than passively) forces water through the carbon. I would recommend starting with about 200ml of AC per 50 gallons of water and replace it every two to three weeks. If you have a higher bio load use more carbon or replace it more often.

About the best advice I can give you if you've never used AC is to try it out for yourself. If you have an aquarium odor problem or yellow water issue, use AC for a couple of days and see how it works for you. If you have a tank full of corals, especially lots of different coral species, try running a "good" acid washed activated carbon for a period of time and see what kind of results you get. You don't know until you try.


BRS has a really good video explaining the different types of AC for aquarium use. See below.
Video