FishLore.com is a tropical fish and aquarium information website for freshwater hobbyists, saltwater hobbyists and reef tank keepers. We strive to provide accurate information all while providing a friendly and fun atmosphere for everyone. We have "how to" guides, aquarium setup articles, fish profiles, a great forum, photo gallery software, aquarium and fish care articles, auctions and classifieds and links to fish and aquarium coupons.

This is all provided FREE for the members here. It is FREE to register and become a member too. All costs for running the website are paid for by the ads on the article pages. We are always adding new "stuff" so check back often.

Our FishLore Members have a wide range of experience levels. From those just starting out in the hobby (newbies) to veteran hobbyists that have been keeping tanks for many years. From those keeping freshwater planted tanks to those that keep saltwater reef tanks, we have it all.

We have a very simple creed that we stand by:

As far as how FishLore got started...

Several years ago (pre 2004) I frequented many of the online fish forums and would often read rude or disparaging posts from more senior folks directed towards those new to the aquarium hobby and it always ticked me off when I came across those posts. It seemed like this behavior was starting to spread from place to place - probably the same rude people, just with different user names on the various forums.

I wanted to create a place where those new to the hobby could come to ask questions and not feel stupid or get ridiculed for asking those questions. I also wanted a place where there was an underlying respect for ALL of the members, not just the senior members. On some of the other boards it seems like the senior members have forgotten that they too were new to this hobby at one point. Some of those senior folks really thought of themselves as experts, I mean really, how could anyone possibly be an expert in this hobby.

I also wanted to create an atmosphere that supports a free flow of information among hobbyists. Many of the fish and aquarium books you read are written by ichthyologists or marine biologists and I think it's FANTASTIC that they are willing to share what they know, but I think that most of the future advancements, breakthroughs and innovations in this hobby are going to come from the hobbyists. For instance, reef tanks are really gaining in popularity, but there is so much that is NOT known about the exact care requirements of most of the inverts and corals that are being kept or going to be kept in the future. I think there may be increased pressure from regulation in the future on animals, corals and other invertebrates taken from our oceans. Especially as global warming advances. Hopefully, websites like this one can help hobbyists provide the best care for our precious animals.

Besides the flaming posts on some of the other boards, an even more disturbing trend is that most of the small fish stores are being taken over by the larger chain stores as they move into more and more areas. This is kind of sad, since the owners of the smaller stores were (often) extremely knowledgable and wanted you to be successful. If you were successful that meant more future sales for their store. This doesn't seem to be the case with the larger chain stores. These chain stores compete by hiring minimum wage workers with no formal training in the animals they are selling. I guess I have mixed feelings about these stores... You are able to get equipment cheaper since they can buy in bulk and pass the savings on to you, but you don't get the opportunity to ask the really important questions before you buy the animal. That's were sites like Fishlore can help. We can help each other by sharing what we know about the various species and topics related to fish keeping. We can also help organize our collective thoughts and present them to the larger retailers as a group to help make things better.

The FishLore forum is growing all the time and the moderators and members here deserve ALL the credit. I just try to keep the place running by writing articles for the html side of the website, implementing suggestions from the mods and members and keeping the riff-raff to a minimum.

My fish keeping experience is measured in decades. I've had freshwater and saltwater aquariums for over 30 years now. The site, FishLore, has been online since 2005 and I've been keeping fish since my childhood. I guess you could say that I've always had a fascination for fish. I had several smaller aquariums throughout my childhood. Some did good, others not so good. Like the time I kept 4 piranhas in a 10 gallon tank when I was 12. After several months and the escalating costs of acquiring live feeder goldfish (had to beg Mom for money) I ended up giving the piranhas away to a family friend who was able to provide a much better environment for them.

I went through the typical stages of keeping goldfish (in a bowl) and breeding guppies while in my teen years. What a sense of accomplishment it was to get those guppies to breed. I know, it's funny looking back on this. The only knowledge I had of the guppies was second-hand from the fish store and friends who were doing the same thing. We had grand hopes of opening our own fish store. After the guppies we (my friends and I) advanced to Angelfish and Tetras. Then sports and college came along and the fish were given to my younger sister.

Fast forward several years - I didn't get really serious about this hobby until my mid-twenties. When my daughter was 2 years old I wanted to get something for us to care for that wasn't too messy. Ha ha, man did I open a can of worms! I wanted this tank to be so cool and interesting for my Daughter. I wanted to get her curious about life and caring for animals. But, it turns out that she could care less about fish and it was I that developed MTS (Multiple Tank Syndrome). One tank soon turned into 2, which turned into 3, then 4, and that is when I tried to consolidate the smaller tanks into 1 big tank. The 10 gallon, 20 and 29 gallon tanks were merged into a 55 gallon freshwater tank. All the while I was reading everything I could and talking to anyone that would answer my questions to feed my hunger for knowledge and to provide the best environment for my fish.

The saltwater bug soon bit and it was a natural progression of my aquarium sickness. I had always wanted a saltwater tank, but could never afford one when I was younger. For all you freshies out there, be warned that the saltwater side of this hobby can be even more addicting. A saltwater tank is not nearly as difficult as some would lead you to believe and hopefully some of the articles on FishLore can get you started on the right path. Below are some pics of my reef tank. 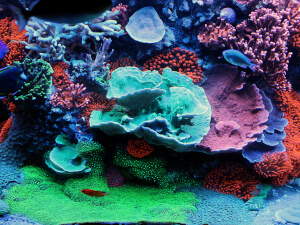 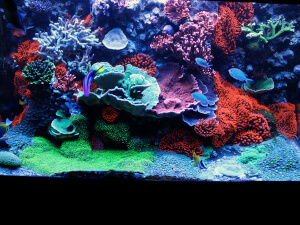 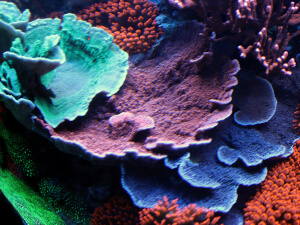 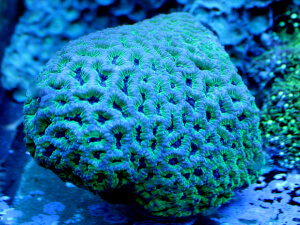 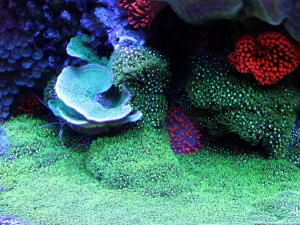 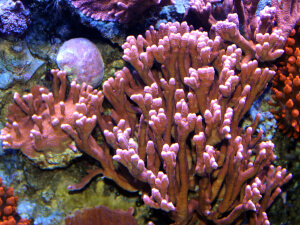 120 Gallon Saltwater Reef Tank Seup - I seem to be slowly getting larger and larger aquariums. This reef tank has various sps corals including montiporas and acroporas. I also have several types and colors of zoanthids that I'm trying to have populate the bare bottom of the tank. There are two ecotech vortech mp40W on each side of the tank that run in short pulse mode to create the really cool wave effect and the corals really seem to like (better growth) the turbulent flows these pumps provide. I have a 40 gallon sump under the tank with an eheim return pump. I also run several reactors full of biopellets and they are doing a nice job on the nitrates and phosphates. For lighting I was running the ATI Sunpower 8x54 watt T5 fixture but have since switched to LED's, specifically the Ecotech Radion Pro LED Fixture . See some pictures here: Mike's 120 Gallon Reef Tank

55 Gallon Saltwater Tank - set up initially as a FOWLR (Fish Only with Live Rock) but slowly transitioning it into a reef tank. Currently growing out SPS coral frags, two crocea clams, a yellow tang, several zoanthids species, green chromis, a breeding pair of maroon clownfish. There is an attached refugium that I use to grow chaetomorpha. This tank runs T5-HO lights (8 bulbs at 54 watts each) and has about 60 pounds of live rock.

55 Gallon Freshwater Aquarium - Silver Dollars, Angelfish, various tetras. This tank has been set up the longest.

28 Gallon Nano-Cube - while trying to save up for a really big reef tank I couldn't take it any more and bought a 28 gallon nano cube setup with a 150 watt HQI-Metal Halide that is now being set up. Will have a setup article on this tank soon. (Dec. 2007) This set my savings back a bit, but I'm really diggin this tank and I'm really glad I bought it. I plan to try my hand at growing some zoanthids and SPS corals in this tank or maybe even try to breed a marine fish species. I still am working on getting the necessary food culturing vessels ready for phytoplankton and zooplankton for rearing spawns. I'm really taking my time with this tank and trying to enjoy it as much as possible! EDIT: this is now my Son's tank. He is raising clownfish in it.

Maybe I'm trying to make up for what I put my fish through as a kid (like keeping those poor piranhas in that 10 gallon tank!). I don't know, but I do know that I love this hobby and all of my fellow FishLore friends that I've made along the way.

Without our moderators FishLore would quickly become like many other websites and forums on the internet - full of spam and inappropriate material. Our mods do a fantastic job of keeping the forum going and helping members with their fish and aquarium questions.

Here are links to some of the mods that have been spotlighted for the FishLore Magazine:

More spotlights to come soon on the rest of the mods!

About the FishLore Magazine Authors

We are extremely fortunate to have members that want to help other hobbyists so much that they are willing to write articles on various subjects related to aquarium keeping. Tom, Sirdarksol, Sabi, Tim, Atm, Ross and Dave have written articles thus far. Be sure to send a thank you to these fine folks because without them there would be no magazine. Going forward, hopefully more and more members will step up and volunteer to write articles for the magazine. It's all about helping others. We have a new magazine issue online at the beginning of every month.

FishLore has an awesome group of members that go out of their way to help each other. It is really something to see. Their self-less contributions to their fellow aquarists are incredible and without our members this site would just be another website. It is the membership here that makes Fish Lore stand out! Check the forum out and see for yourself all the wonderful people that post here.

Well, that's the big picture of FishLore.com. Join us for the ride. It's going to be fun.