Lionfish are also known as the turkey fish, the butterfly cod fish and the red fire fish. There are a few varieties (antennata, fu manchu, radiata and russell's) with two primary types. The common (Pterois) and the dwarf (Dendrochirus). The common lionfish variety can grow to 12 inches (30 cm) or larger whereas the dwarf varieties usually only grow to half that size. 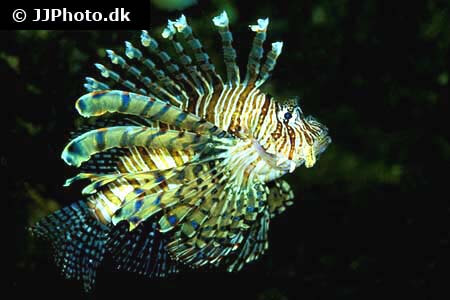 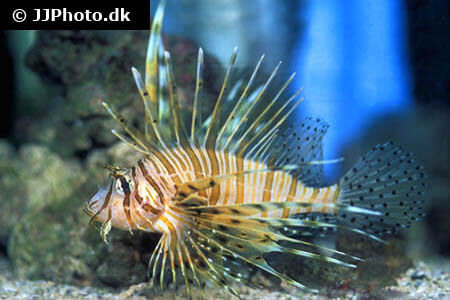 Take note that the spines on this fish are venomous and if you get pricked it may be fairly painful and you should probably seek medical attention from a Lionfish sting. Be very careful when handling them (with a net) and while performing tank maintenance.

They are very efficient at polluting the water in your tank, so it is probably wise to give them no more than 1 small feeding per day. They require a good aquarium filter system and highly oxygenated water provided via a protein skimmer and/or multiple power heads.

Dwarf Lionfish varieties could probably be kept in 30 gallon (114 liters) tanks or larger whereas the common lionfish should be kept in a 55 gallon (208 liters) or preferably much larger tank given their potential adult size.

Avoid putting them in a community tank with fish small enough to fit in their mouths. Otherwise, they will quickly rid your tank of the smaller fish. They will also go after some saltwater invertebrates so they are probably not a good choice for reef tanks and they are not considered reef tank safe. 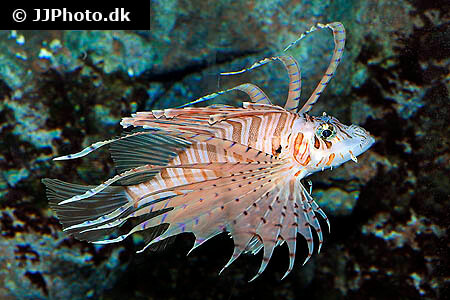 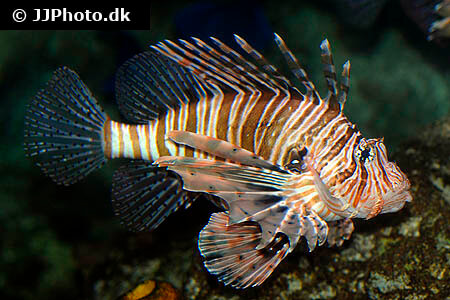 In the Caribbean, the Gulf of Mexico and up the east coast of Florida they are having problems with the non-native Lionfish. Some are calling it an invasion. Hunting expeditions go out with the purpose of eradicating this species from these waters because they are harming the native species. Scientists speculate that they could have been introduced by unaware hobbyists or even from ships that pass through the area. Climate change is only making matters worse due to increases in lionfish size and reproduction rates. 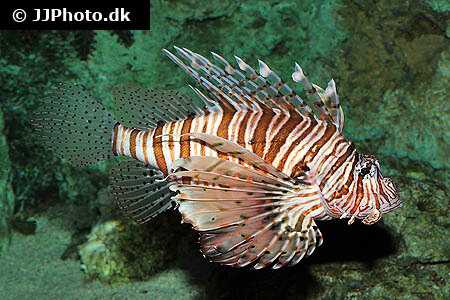 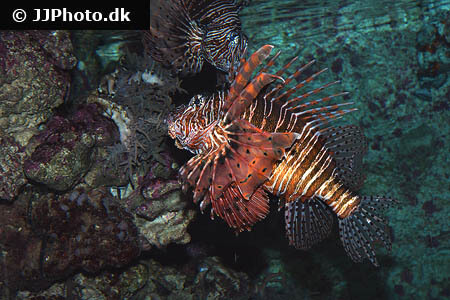 Care Level : Easy to moderate, needs a good aquarium filter to keep wastes at a minimum.

Temperament / Behavior : They are not usually overtly aggressive and can make decent tank mates with fish of the same or larger size. They are hard wired to go after smaller fish and invertebrates such as shrimps. They should be kept in a semi-aggressive tank and should probably be left out of the community tank.

Breeding : The only reported successes have been in a few public aquariums.

Aquarium Size : 30 gallon minimum for the dwarf varieties, 55 gallon for the common (pterois).

Tank Mates : Avoid keeping them in an aquarium with smaller fish which they may view as a snack.

Reef Tank Compatible? : Not a good choice because of the pristine water conditions required in a reef aquarium setup. They can introduce large amounts of waste and they are predators that will go after and eat smaller fish and possibly saltwater invertebrates.

Diet / Foods : Primarily a carnivore and prefers live foods. Try to get them on frozen or fresh foods quickly.