The Neon Tetra fish is one of the most attractive of all the readily available tropical fishes. This tetra has been getting a bad reputation in recent years for the difficulty in keeping them alive in the home aquarium. This bad reputation could be attributed to the increasing public demand and the methods by which breeders are meeting those demands by the inbreeding of this once hardy tropical fish. 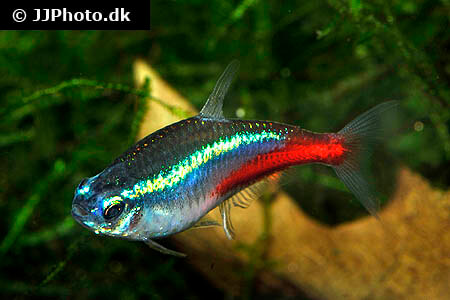 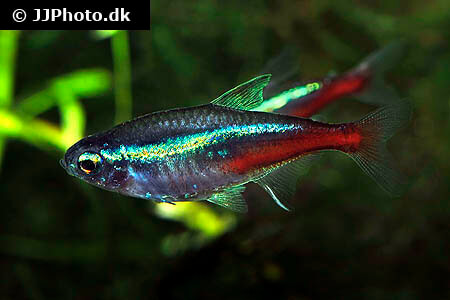 Try to add at least 6 or more neons to your mature, fully cycled aquarium in order to increase your chances of success. Spending a little more time during the acclimation process may help as well. If you do the floating bag method, at least try to add small amounts of the tank water into the bag every 10 minutes so that they can slowly adjust to pH as well as temperature. Float them and add the small amounts of tank water for an hour. The drip acclimation method would be the preferred way to go with this fish in my opinion.

Keep up with those water changes to prevent the nitrate levels from getting too high!

This tetra, like many other tetras, will accept tropical fish flakes, frozen and freeze dried foods. 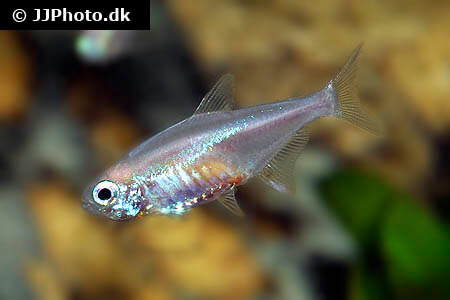 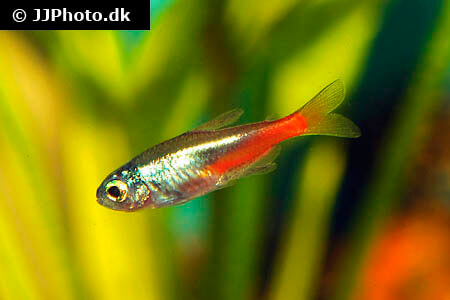 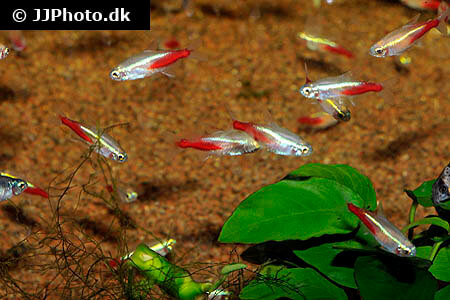 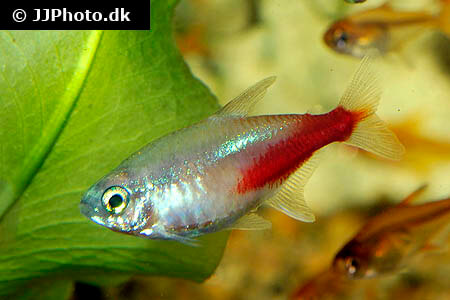 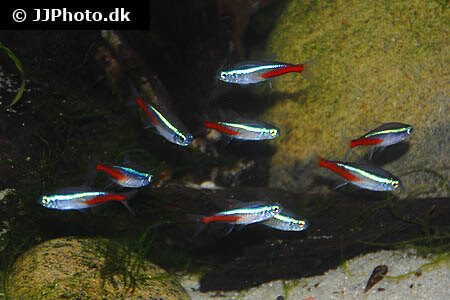 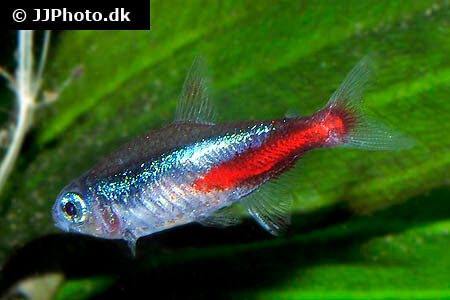 Care Level : Moderate - it's a good idea to stay on top of your Water changes to prevent the nitrate levels from accumulating.

Origin / Habitat : South America - it is one of the most imported freshwater fish species.

Temperament / Behavior : Neons are peaceful tropical fish and best kept in schools of 6 or more.

Breeding : They are difficult to breed in the home aquarium. They prefer slightly acidic and soft water around 77 degrees F (source)

Tank Mates : Many, given their peaceful nature. Avoid keeping with tropical fish large enough to eat them.

Gender : The male is usually smaller than a female of the same age.

From: Craig D. via email
Hi there, I have recently bought my daughter a small aquarium, to which we introduced a dozen Neon Tetra. In the 3 weeks my daughter has had the aquarium all of the fish have died. The latest culling was today after a water change. 6 fish died within a few hours of each other. The PH level has been fine but I suspect the chlorine level from the tap water is the culprit. Is there a precautionary treatment I should of done prior to adding the tap water? Great site, Craig.
FishLore:
Hi Craig.
We need to know more about your water parameters. With your aquarium test kit, test your ammonia, nitrite and nitrate levels as well as your tap water for chlorine and chloramine. It is quite possible that chlorine or chloramine is the culprit. There are products on the market that will neutralize chlorine and chloramine. Try using something like AquaSafe. If your tank was not cycled then another potential culprit is ammonia. Check out the Nitrogen Cycle for more information.
From: Sierra
Should I even try to get neons? I've heard so many bad things about them not living, but I really want some!
FishLore:
If you are monitoring your water parameters, doing those water changes on a regular basis and your tank can accommodate more fish, then you should try them. One of the prettiest sites is to see a school of them darting around a tank.
From: Dale
FishLore:
I think a lot of people have the common misconception that just because the neon tetra is so popular that they can just put it in any tank with any water and it will flourish. I have a species tank with 12 neons and 2 leopard cory cats and I have found that black water extract, a wide variety of food, and a ph of around 6.5 to 6.8 and my neons color is great and the health is excellent. Just like any fish they have requirements too.
From: Ashley
I have been considering Neons for awhile and am now going to be getting some. I am going to be getting a 3 gallon tank and was wondering how many Neons will be well suited for this size tank?
FishLore:
If you can provide good filtration, a suitable heater and your tank has completely cycled you may be able to have one or two neons in it. Having a smaller tank means that you will have to monitor your water paramenters more diligently because it will be less stable than a larger tank. Using a small tank setup also means that you won't get to see the beautiful schooling behavior that a group of 6 or more neons would display.
From: Kim
I was wondering what kinds of other tetras shoal with neons?
FishLore:
Sometimes they will group together with other tetras such as the glowlight tetra but mostly they will stay with the other neons.
From: Fish Lover
These are fun fish. I had three senior zebra danios that chased each other around the tank. Then the tetras started doing that too! Keep in mind that they are NOT a very hardy fish, though. One got close to the filter tube during the night and got stuck to the side of it. In the morning I found a very dead and very mangled tetra. Also, the heater had a MAJOR malfuntion and the water got way too hot. When we took the heater out of the water, it sizzled. The zebra danios and goldfish acted like nothing was wrong. As for the tetras, they literally baked. Oh, and was also dumped the faulty heater in the garbage and bought a new one. So be careful with tetras(and old heaters)! I had a run of bad luck killing mine.
FishLore:
The tetra could have passed of other causes and was pulled onto the aquarium filter intake after it died. It's not recommended to keep goldfish with tropicals due to the temperature differences and because goldies are large waste producers.
From: SDMatt
I've found that the Neon tetras I've kept had a hard time with hard water (high KH). Southern California tap water is extremly hard. I managed to keep my neons healthy by using softer water. Just make sure it's not too soft, as it's hard to manage PH is water that is extremly soft (too few buffers)
From: Aquatics
I have found them to be hardy once they get past the acclimation process (introducing them into your tank after purchase). There is better chance of success if you float them for more than an hour with every fifteen minutes adding a small amount of water from the tank to the bag. Using Blackwater Extract, some live plants, and making sure to do partial water changes bi-weekly are good ideas.

Also make sure the neons get their food! I used to have neons with zebra danios and the danios were eating all the flake food before it sank to the neons and some died as a result. Don't give up on neons if you have early failures. They are one of the neatest colored tropical fish available and you can keep them just like easier danios/barbs if you treat them like a fish needing a few 'special' precautions.

Phenacongrammus interrutpus
Congo Tetra
As the name indicates the Congo tetra originates from the River Congo as well as Central African rivers. They are extremely beautiful African characins, growing slightly larger than most of its kind.