The Molly is a tropical fish that prefers some salt in their water. A teaspoon of aquarium salt per 5 gallons of water will go a long way in helping them. You may also see them in saltwater tanks from time to time. There is a local reef store here that keeps black mollies in a regular saltwater tank with similar sized species.

The molly is a very attractive tropical fish that comes in many different colors such as orange, green and black. Some of the more popular varieties include the sailfin, balloon and the dalmation. 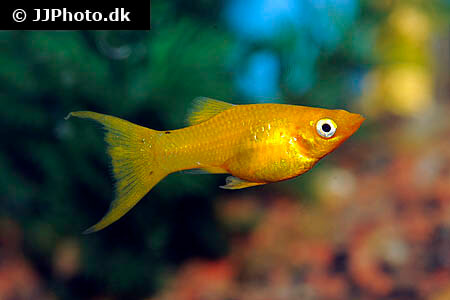 This is a livebearing tropical fish that can be fairly easy to breed. For many aquarists the biggest problem is not getting them to breed but stopping them from breeding. If left in a tank with other adult fish, the babies will get eaten.

Regarding Balloon Mollies; the balloon trait is obtained by selectively breeding fish with scoliosis (bent spine). Balloon mollies often have a reduced lifespan due to three factors: the inefficiency of the misshapen morphology causing wear and tear while swimming, the compact position of its internal organs in comparison to a non-balloon variety, and often seen difficulties giving birth.

To salt or not to salt?
Sailfin and black mollies can tolerate a little bit of aquarium salt (mexican mollies require it), up to about 1 table spoon of salt per gallon. It has been argued, however, that salt actually irritates their skin. I myself only use salt in cases of ich. If you do use salt, please use aquarium salt and not kitchen salt (has natrium in it) or marine salt (has minerals in it).

There are 3 different species of mollies, which have been re-classified, ungrouped and re-grouped several times. Most of the variations you see today are man-made. The current consensus on the main species is as follows: 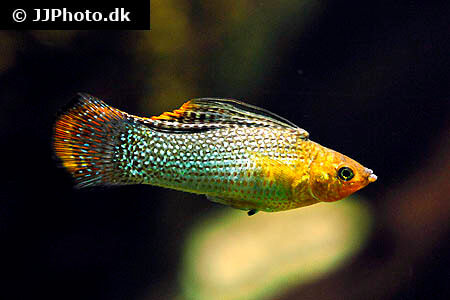 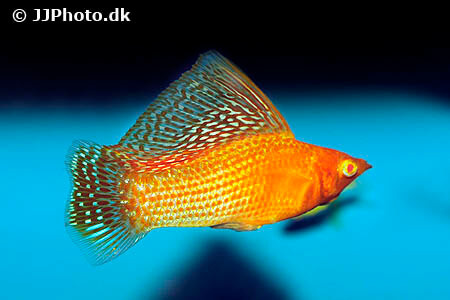 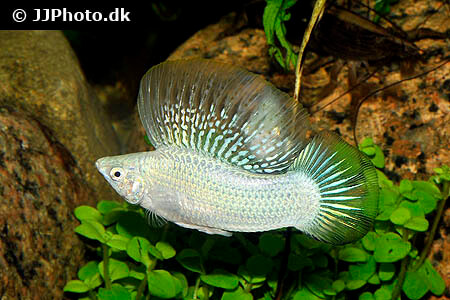 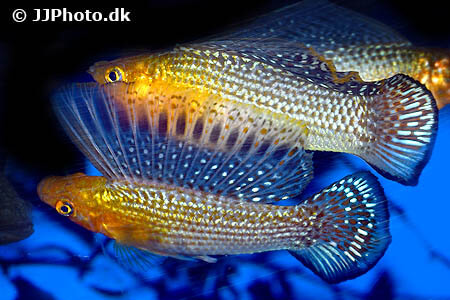 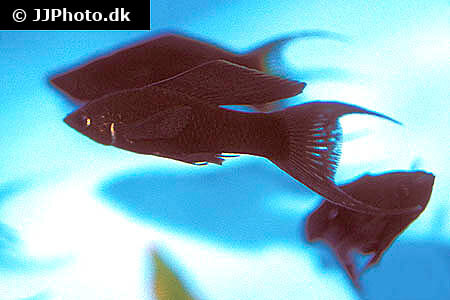 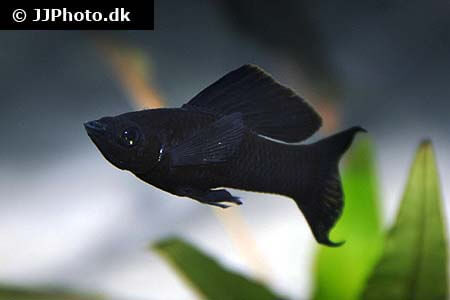 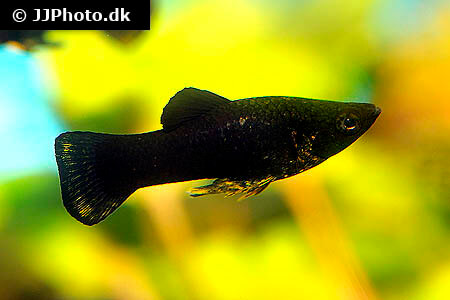 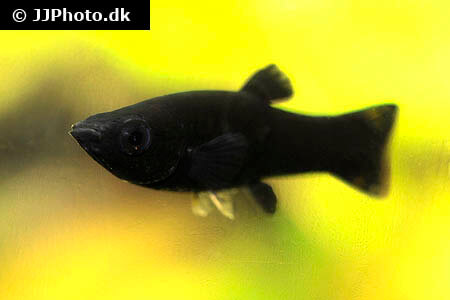 Some morphological varieties have been bred into the three species: you can now find balloon (pot-belly) and lyretail varieties, for example, and a whole sort of color assortments.

Care Level : Easy and a very good for beginners if keeping a single gender. Keeping both genders could cause problems since this fish is such a prolific breeder.

Breeding : These are livebearers so it is fairly easy. Females are usually larger than males. Adding a little aquarium salt will help reproduction.

Do you have a pregnant molly? Read the breeding guppies article for more information. That article talks about guppies and swordtails, but the process is very similar for the babies.

If you want to try and raise the fry think about getting a breeding box or breeder net like these:

How do I know they're mating?
The male will constantly chase the female and point his gonopodium towards her belly in the chase.

How long is the pregnancy?
Normally speaking, the gestation period is abour 4 weeks after mating. They can get pregnant immediately after giving birth, so it's not uncommon to have your females nearly PERMANENTLY pregnant, and giving birth every 4 weeks or so.

Females can hold sperm without letting it develop into fry for a very long time (weeks and weeks on end). They'll do that if they feel the conditions are not right for their young to develop. This is causing the oft-seen phenomenon of females arriving pregnant form the shop, prompting many people to bewonder the miracle of immaculate conception, or extreme cross-species breeding with, say, blue whale tank mates.

What's a livebearer?
They are livebearers, which means that the fry is born free-swimming. They are ovoviviparous, though the young does have an egg stage inside the mother, unlike mammals, which are viviparous (no egg stage at all: the baby IS the egg).

How many fry will she have?
A young female's first ever batch can be as little as a dozen fry. As she gets pregnant again (and again, and again and again...), she's likely to give birth to increasingly large batches. Some people report prolific mothers regularly give birth to 80 or so fry per batch. They may give birth in 2 or more phases, releasing the second half a week or so after the first batch was dropped.

How do I know she's pregnant?
A female about to give birth will look almost boxy in shape, distended that she is with all the fry inside her. Another tell-tale sign that she's about to give birth is that she may lack appetite a day or two before dropping her fry. She'll also likely isolate herself form the others, and lay in a quiet spot on the substrate. This behaviour often prompts panicked owners to diagnose a disease, but it's common in pregnant livebearers, and she'll soon recover her spirirts. If your fish is relatively transparent in color, you may distinguish what is called the gravid spot on her abdomen. This looks like a darker spot, and is the mass of fry that you can see through the fish. The closer she is to dropping, the closer the spot will be to her cloaca.

Why does my fry disappear?
They (and other tankmates) can eat their young. The young also commonly get trapped under gravel. If you want to keep your fry alive, you'll need to either provide plenty of cover for them (a floating plant, mini pots/jars on the substrate, stacked flat marbles or a densely planted area should ensure that some of your fry makes it to adulthood) or to isolate the female prior to her giving birth. I personally never isolate my pregnant females, as it stresses them out. Simply speaking, the fry cease to be in danger when they are too big to fit in the tank mates' mouth.

When do I know if the fry are male or female?
You can identify the young from about 3 months old. Before that, the immature fry will all look like females. Do separate them from their parents before they reach maturity to avoid inbreeding.

Interbreeding between species
All three molly species can interbreed. Other livebearers can also breed with mollies. The following interbreeding combinations have been reported: guppy-molly, and swordtail-platys. But beware, the resulting fry are mostly sterile, deformed runts, and you will not be able to give them away to a shop.

Male/female ratio
If you don't want fry all the time, you'll need to separate the males from the females. Same-gender tanks should really have at least 3 together to avoid the alpha fish victimising the subservient fish. Mixed-gender tanks should keep at least 1 male per two, or even better, three, females. You'll soon notice that the male's insatiable appetite would end up exhausting a lone female.

Tank Mates : Not many - some feel they should only be kept with others of the same species.

They can show the following disease symptoms:
Shimmy: get shimmy block or molly bright medication to catch at onset. Shimmy is sign of early development of one of several possible diseases.

Torn fins: either result of a fight or finrot. I would isolate the fish and treat with disinfectant. If it is finrot, you will need to determine whether it bacterial or fungal before treating.

Lethargy: commonest cause is just pregnancy.

Gasping for air on the surface: temperature could be too high. oxygenation could be too low. could be nitrate/nitrite/ammonia poisoning.

Dull white film on skin: could be oodinium (turn the tank light off and shine a torch on the fish. If the white patch glows back, it's oodinium). Could be a fungal infection (furry-looking white patch, like mold).

Slanted swimming, swimming upright or on the side: possibly a swim bladder problem, or a spine problem. Spine problems can be caused by a vitamin defficiency or by TB.

Pop eye: Symptom of many possible diseases, including the dreaded fish TB. Could also be mechanical damage from fight or knocking against ornament. Pop eye can also be caused by water pollution with plastic or metal, or by ammonia/nitrite/nitrate. In rare cases, pop eye is caused by oxygen oversaturation (gas bubble disease).

Sunken belly: Symptom of many possible diseases, including fish TB. Sometimes the fish has trouble eating from a wound around the mouth area.

Diet / Foods : Give them a varied diet consisting primarily of flake foods but supplement with live and freeze dried foods occasionaly. Some feeding tips:

How Much To Feed Them?
A common rule of thumb is that a fish' stomach is the same size is one of its eyes, so try to stick to one stomach's worth of food per fish per feeding. Feed in slow batches, giving a small portion and waiting until they've eaten it before giving more. Fasting them one day a week is a good idea too.

Tank Region : All over the tank.