The Kissing Gourami gets its name from the way it will kiss other gouramis and other fish in your tank. They are not kissing but they are in fact acting aggressive and having a showdown. When they do this it means that one is trying to establish dominance over the other. 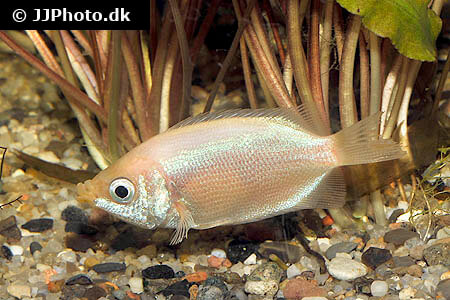 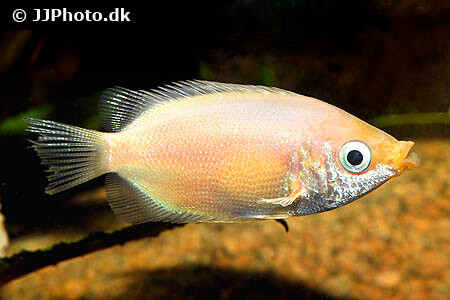 The Kissing Gourami can get quite large, often 10 - 12 inches in length. We do not recommend them for the beginner because of their potential adult size and because they can become very territorial in a community tank. They will often chase your other fish around the tank, especially after fish food has entered the aquarium. This behavior can get very annoying.

They are not picky eaters and will go after flakes, pellets, frozen, freeze dried and live foods. 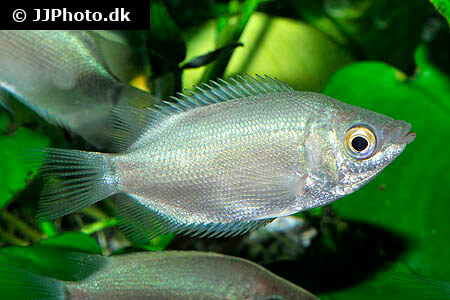 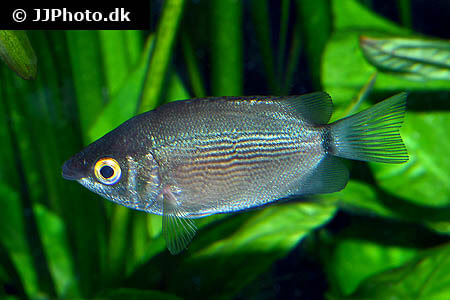 Temperament / Behavior : They can be territorial at times and will fight with their mouths. We've found that it is good to get a pair so that when they are feeling aggressive they will chase each other around instead of the other tropical fish.

Breeding : Very difficult to breed because they require large tanks.

Tank Mates : Because of its potential adult size and because it can become territorial, use caution when selecting tank mates.

Gender : Can not be determined by external features.

From: Dave
Wish I would have read this profile before getting mine. I got one of these and that has to be the most obnoxious fish I've ever had. I took him back to the store.
From: Lei
Ours is a lovely character. I have read on various websites that a lot of people do own peaceful kissing gouramies, although there are still many many people who own troublesome ones. Perhaps it is just chance, and the behaviour depends on the individual fish?
Thanks for the comment Lei. It could also be that the aggressive behavior may be lessened if you keep them in a larger tank. Putting them in too small an aquarium may lead to territorial problems with many fish.
From: Angela
I was given one by someone who had no idea what it was. It looked like a fish in her father's tank that had died while he was away and she was asked to look after the tank. I had never had fish and had no idea what I had. It took me a month to ID the fish. In the meantime, I got 12 tetras, 8 platys and 1 algae eater ( 75 gal tank) to keep it company. It gets along fine with everyone except the algae eater and I think that is because they both like the algae wafers I put in the tank to supplement the diet of the algae eater because there is very little algae in the tank and I think the other fish could use a little vegetation in their diets and they turn their noses up at the veg flakes. Maybe because it has lived with the other fishes since it was about the same size as the others, it doesn't try to bully anyone. The tetras live in their own world and the gourami interacts with the platies mostly or keeps to itself, but no terrorital problems at all.
From: Raye
I put a baby and an adult kissing fish together and the adult kept picking on the younger one so it never got to eat and ended up dying, but now I have a parrot fish, and they get along great together.
From: Joe
I bought two and they are housed in a 55 gallon community tank. They get along well with the other fish and when feeling aggressive, they kiss one another in a type of duel. Interesting fish.
From: Tom
I wish I would've known about this site before I bought mine. They are extremely obnoxious, and even though I have 2, they still pick on the other fish. I am not able to take them back, and they are affecting the health of the other fish, because of the 'kissing'. I'd be careful when buying these fish.
From: Paul
I put 2 kissing gourami in a tank together with other various fish including fighters, angels, tetras and swordtails and 1 of the kissers kept chasing the other and is now so quiet and still and not eating. I think it is going to die and do not have another tank so I cant remove it. When I first put the two fish in they looked happy swimming together but its now not the case after 3 days. Although he bullys the other kisser he doesn't seem to bother anything else.
This is a common experience when keeping multiples of this species in the same tank. Take one of them back to the store for a refund or store credit and do tell them about your experience so that they don't sell multiples to others that plan on keeping them in the same tank.
From: Angela
I have a pair of kissing gourami along with many other types of fish in a 1,000 gallon regulated pond outside under my covered porch. They do the kissing thing mostly to each other but do annoy others at times. The other day I thought my Koi was dead and the kissing fish seemed to be kissing it all over its limp body. In fact that Koi is alive and well, the kissing fish was cleaning/scrathing the Koi and it loved it. I see them do this more often these days and hope since all are young healthy fish they will continue doing well together.
From: Emma
I got two kissing fish yesterday and my pink one is very aggressive and I think has hurt the other one. The other fish looks like it isn't going to last too long. I wish I had done some research on this fish before we got them for our tank. Just a little tip, research fish before you purchase them, it's better for you and the fish. Thanks.
From: Cammiluna
I've had a kissing gourami named Kirby for the years of 1996-2003, and his personality... changed a bit over the years. He was first in a 10-gallon tank and got along with everyone. Then I babysat someone's goldfish in the tank (Meeko), and while Kirby DID chase Meeko whenever he got lazy, he never inflicted any damage aside a few tail fin nips.

This went on for four years (I've grown so attatched to Meeko that I was allowed to keep him). During those four years, my dad gave me fish ranging from angel fish to tiger barbs and other gourami, and they've all attacked my kisser a lot, but he never did anything back to them. Kirby was a pansy, surely. Particularly, my kisser, goldfish, and an iridescent shark by the name of Boomer roomied together for 4 years. The later 2 years they grew so large I had to get a 20-gallon tank for them. The shark grew too big for that and kept rampaging around the tank every few minutes, crashing into the goldfish and impaling him until he died from his injuries.

I know this topic is about Kissing Gourami, but my kisser and the shark got along PERFECTLY for four years, but on the morning after my goldfish died, Kirby Ripped the flesh off the shark (whose twice his size) and mauled him until he died. I was afraid to buy any new fish for the tank for a while so he was on his own and I put him back in a 10-gallon tank since my dad wasn't around to help me with maintenance anymore. A year later I was given some new brown gouramis for the tank and they picked on my kisser all the time. He once again did nothing to fight back, and he remained friendly again until he died from eating poisoned roaches that drowned in his tank.

I have a new kisser now after a 3-year haitus from raising fish. He's about the size of a thumb and gets along with my two catfish quite well. Based on my experiences with Kirby and the new guy, A good setup for a community tank with Kissers can use a lot of balance. Kissing Gouramis like the mid and top waters (mostly mid), so bottom-dwellers like Catfish will do fairly well in the tank. Kirby never bothered my catfish at all to times where I forgot those catfish exist in my tank sometimes. Also, I think Kissers get annoyed with slow/lazy fish, especially if they occupy his height level of the tank (hence why my goldfish was chased around for four years), so make sure his mid-water roomates are active and speedy. Smaller fish can probably do well as long as they're speedy, even Neon tetras. It may not work for every kisser, but this balance worked for my gang for many years.

From: Jimmy
I bought 3 to keep my mollies company, after a week of being shy, the alpha showed his true colors and started being a real ass and not letting the other two eat, well actually he lets one eat a little before he starts bullying, the other gets nothing and has to hide behind the heater in constant fear. Who would of thought something so innocent looking could behave like this?
From: Scott
I own about 5 of these (some are hiding right now) in a 55 gallon tank - great fish. I've had no problems with agression with any of the other fish and tonight for the first time since I got them (over 6 months ago) I saw two "kissing". They range in size from 2 inches long to 6 inches long and are all the same age. I'd highly recommend these fish in a large tank. I also have a plecostomus (about 8" long), 3 giant danios, 2 small danios, and 2 blue gouramis that are also 5-6 inches long. I also have a razorback stinkpot turtle (fist size) that's 3 years old. It's a very peaceful tank except for the turtle "rides" the pleco around the tank by holding on with all 4 legs as it swims around the tank stirring up fish in its wake. I haven't had any problems with the kissing gouramis being aggressive.
From: Lisa
I have two of these guys in my tank, overall they seem to be doing well but I think it's only because they have other fish who are equally as annoying as they are. They get along great with my angel fish but they do pick on the snail bit. Be wise if you buy this type of fish, house it with fish that are bigger than them.
From: Allan
I keep 3-4 Kissing Gouramis at a time. They've never picked on my other fish. I have found that as long as I keep more than 2, there does not seem to be a dominant one, either. I also agree with the snail comment.
From: Shae - Aggressive Gourami
I have 125 Gallon tank and brought two pink kissers home together - both the same size. One grew 5x the speed of the other, preventing the smaller one from eating. He then started bullying the biggest fish in the tank - a full grown, three-spot gourami. I had to isolate him within the tank using a plastic collander and then purchased a smaller aquarium, just for him. The other is still in the community tank and is sweet as could be, doesn't bother anyone. These fish are very much individuals. It's a coin toss bringing them home from the store, so you have to prepare for the worst. 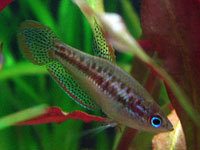