There are a lot of different types of Hermit Crabs available but some are better than others in a marine aquarium. If you are looking for something to add to your clean up crew, check out the blue-legged and red-legged varieties. They will scavenge all over your live rock and sand substrate looking for algae and detritus.

It has been reported that the red leg hermit will eat cyanobacteria, which is red slime algae. If you have a relatively new tank you may want to supplement their diet with dried seaweed to prevent them from starving. You will also want to get some extra shells of different sizes for them to move in to as they grow.

Take a little more time when acclimating this crab to your tank water to prevent pH shock. As with other invertebrates, use extreme caution when using medicine in a tank with hermits. You risk wiping them out if you do use medicines, especially those that contain copper.

Care Level : Easy, good for saltwater beginners but take an hour or more and use a slow drip acclimation to get them used to your tank's water parameters. Don't be alarmed if you find that your hermit crab is molting.

Breeding : Difficult to breed them

Tank Mates : Even though they do have a protective shell, caution is advised if you plan on keeping them with some of the more aggressive marine invertebrates.

Food - Diet : They will usually scavenge all over live rock and the sand substrate looking for algae and cyanobacteria (red slime algae). If you don't have enough algae in your tank give them dried seaweed.

Tank Region : Mostly found on, in or around your live rock.

Gender : There are no definite ways to distinguish males from females. 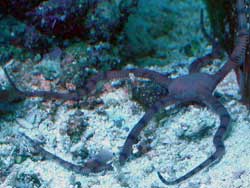 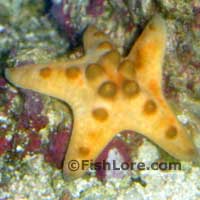