Of all aquarium fish the Betta is probably the second most popular fish kept with it being only slightly less popular than Goldfish.

This fish is a favorite because of its beauty, its long flowing fins and because of their relatively easy care. 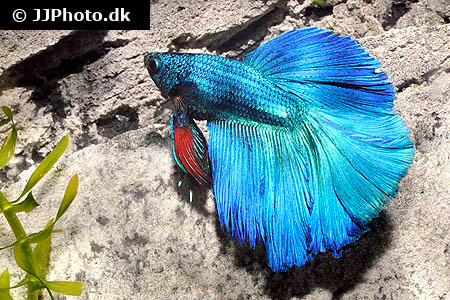 The male betta sports deep beautiful colors whereas the female bettas are for the most part less colorful. Their stunning colors and flowing fins are some of the reasons for their popularity and the low purchase price helps too (usually less than a few US dollars).

However, due to the betta being such an easy sale it has led to some deplorable conditions in which they are kept while waiting to be sold. It really is sad to see how they are kept in many chain pet stores in small jars or small cups, often in very soiled water that is rarely, if ever changed. There are so many threads on the FishLore betta forum about how this fish is kept while waiting sale that we had to eventually start removing them because it was like a broken record. Different big chain store but the same story, over and over.

If you really want to make a difference with how bettas are sold, don't purchase them thinking you are "rescuing" them because all you are doing is positively reinforcing the store's behavior. Buy from reputable breeders or your fellow FishLore forum members here on the Buy - Sell - Trade forum that you know will have good stock.

Hobbyists often get very attached to this fish. We have a lot of threads on the forum looking for betta fish name ideas and this is the primary species for these name idea threads. I'm not sure of the reason behind this but perhaps it's because bettas are often kept as the only fish in the tank and hobbyists become more attached to them than other species. 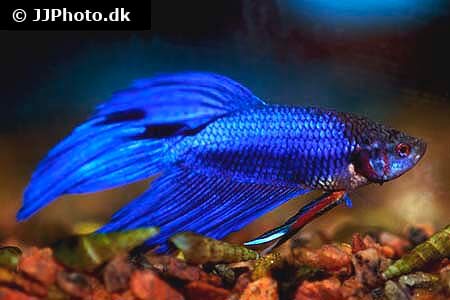 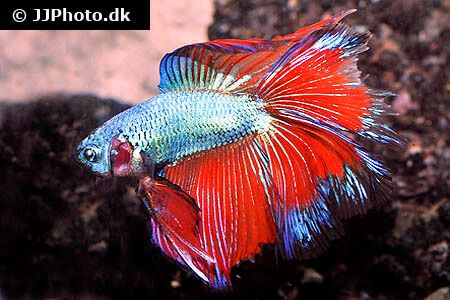 It is called the Siamese Fighting Fish because of its behavior towards other males of the same species. Male betta fish will fight with other male conspecifics. You simply cannot keep two or more males in the same tank unless you have an extremely large fish tank. If more than one male is placed in the same tank, they will fight until only one of them remains. They will flare out their gill covers and erect their fins showing the other fish their fighting posture. This is a natural response that is for protecting their territory or to protect their eggs from rival males. This behavior is also why they are kept separated in small containers at the store.

There are ways to see this flaring behaviour without introducing another male. One way is to use a small hand mirror and place it up against the tank glass so that the male may see his reflection. The male will mistake his reflection as another male and the fighting posture should then be displayed. Doing this too often may lead to an overly stressed fish though.

You can get small tanks that come with dividers which will allow you to keep two in the same tank. Many keep them in a small fish bowl and they may live for a while in these small bowls. However, to get the most beautiful colors and optimal health for your fish, they will do better in a 10 gallon or larger aquarium with an aquarium filter and heater that can maintain a constant temperature and steady water parameters in the aquarium.

If you plan on keeping yours in a small aquarium, please read the Betta Fish Tank Setup article written by COBC for the magazine that lists the equipment needed to keep them.

You will often see people keeping bettas in tiny tanks, vases or bowls. You do NOT want to use these for your fish! You will see these small tanks at the store and probably right next to the tiny cups they are kept in. Don't be fooled though! They need at least several gallons of water, with a filter and heater too. The volume of water is too small, they lack heaters and filters and are in general no better than the tiny cups they are kept in at stores waiting for sale.

If you are looking for one to purchase the prices on bettas can actually get kind of high, especially for show quality. At your local fish store they are usually around $2 to $5. 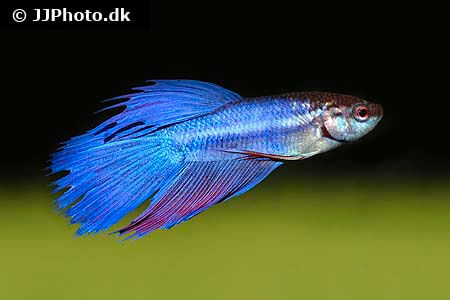 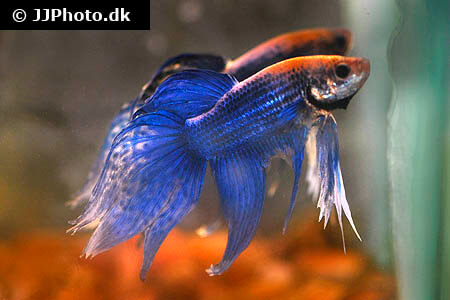 To determine the betta tail type you have, read the forum thread (with pics) Male Tail Types. For figuring out they type of female you have, check out the following thread Female Betta Fish Tail Types.

Care Level : Easy, excellent fish that is good for freshwater beginners and can be just as hardy as goldfish.

Betta Fish Lifespan : 3 - 5 years, possibly longer. How long a betta can live is mostly based on the tank conditions in which they are kept. Often times a new hobbyist doesn't know about the nitrogen cycle, water changes, proper tank setup and the foods they should be feeding them which causes disease issues and shortened lifespans.

Origin / Habitat : They are thoroughly domesticated now but they originated from thailand where they live in overgrown ponds and very slow flowing waters such as shallow rice paddies and similar areas with low dissolved oxygen levels.

Temperament / Behavior : Peaceful if given the right tank mates. They will become aggressive with other males and females. They may also become aggressive towards other fish with large fins such as guppies, angelfish and others.

Breeding / Mating / Reproduction : Can be difficult since the male will fight the female if not introduced at the right time. For more information please read the breeding and general info article or this one on breeding them.

Tank Size : Can be kept in small tanks as small as 2 gallons but they do best in larger tanks.

Fish Food : Carnivore primarily, but will take flakes, freeze dried and live foods. Nowadays there are betta fish foods specifically made for them that you can use as a staple food. In the wild they eat live foods like bloodworms, daphnia and brine shrimp (source). So, recreating their wild diet could be very beneficial. Blood worms and brine shrimp can be used as well.

Gender : The male has much more color and bigger fins than the female.

Do betta fish get lonely?
Even though some hobbyists will tell you that they do indeed get lonely this is opinion only. There have not been any studies done on loneliness in bettas. Given their temperament with conspecifics and other long finned fishes, it is usually best to keep them by themselves in smaller tanks.

What can live with a betta?
Some good tank mates would include corydoras, smaller tetras (keep an eye on them though), loaches, etc. Avoid known fin nippers like many of the barb species as well as longer finned fishes such as angelfish.

Can I have 2 female bettas together?
Depends on who you ask... but in general the females are less aggressive than their male counterparts. That is not to say that you won't have issues keeping multiple females together. There are many threads on these "sorority" type tanks and how they didn't work out that well. See here: Betta sorority aggression.

Will a betta fish bite you?
Yes it is possible to get bitten but given the size of their mouths this isn't a serious issue. They may bite out of self defense or because they are curious.

Mahachai Betta
This is a wild caught betta and a relatively new addition to the fish keeping world.