The Bala Shark is also known as the Silver Shark and is a growing favorite among tropical fish hobbyists. This fish isn't a shark at all though. It belongs in the Cyprinidae family. They are commonly named silver sharks because of their appearance and the shape of their dorsal fin.

These "sharks" require large tanks because of their potential adult size of 13 inches and because this fish does better when kept in groups. They are mostly peaceful but may eat smaller fish such as neon tetras when they reach a large enough size.

Also, be warned that these "sharks" are excellent jumpers. Have a hood on your aquarium to prevent your Silver Shark from leaping to its death. They are very fast swimmers and will dart around your aquarium very quickly. Be sure you don't have any sharp objects in your aquarium that could injure your fish.

They are not recommended for the beginner because of their large aquarium requirements.

These freshwater fish (not really sharks) will eat most types of fish food including vitamin enriched flake foods, pellets, frozen, freeze dried and definitely live foods with the key being a varied diet. They sometimes make a clicking noise while eating. 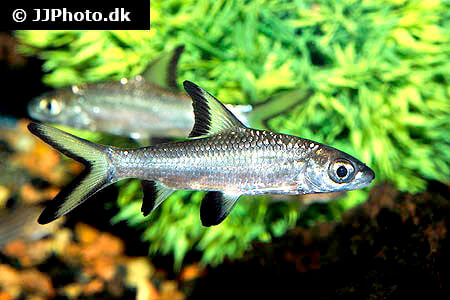 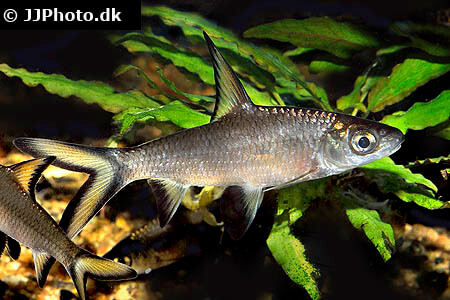 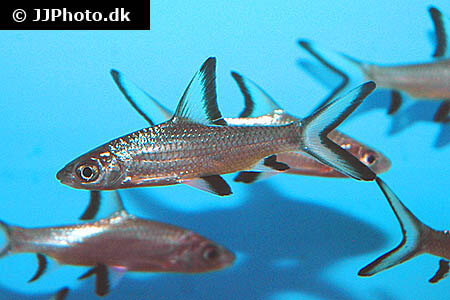 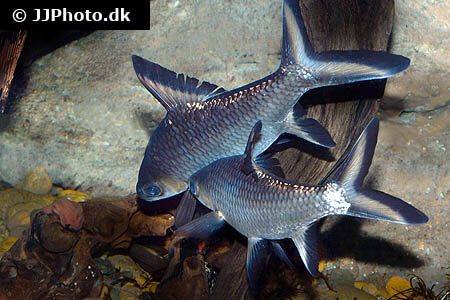 Origin / Habitat : South East Asia and is becoming increasingly exploited due to the fish trade.

Temperament / Behavior : a member of the carp family, peaceful and can be kept with smaller fish. However, don't keep with tropical fish small enough to fit in the Bala's mouth such as neon tetras.

Breeding : Breeding is not recommended in the home aquarium due to their large adult size.

Aquarium Size : They will do much better in larger aquariums. Considering these are shoaling fish and considering their adult size, a 125 or even 180 gallon tank would be more appropriate for an adult school.

Tank Mates : Many, given the peaceful nature of this fish but avoid keeping them with fish small enough for them to eat.

Diet / Foods : Good eaters, they will go after flakes, pellets, freeze dried and live foods. Give them a varied diet.

Gender : Hard to determine, but the female may be smaller than a male Silver Shark of the same age. 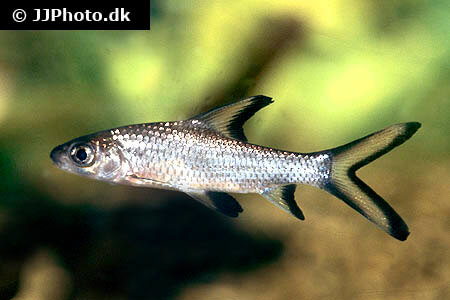 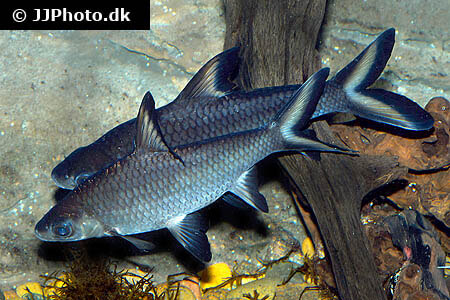 From: Dafydd L.
A couple of our silver sharks are rubbing against each other and we wondered whether they were trying to breed. I read above that breeding is not recommended? Why is this? I look forward to hearing from you.
FishLore:
We've seen this behavior as well in one of our tanks. They will pair up and kind of dance around the tank together. This usually lasts for a few minutes and it seems to occur right after performing a water change or sometimes after eating. I've read a lot of conflicting information on this behavior. Some feel that it could be mating behavior but many don't believe it to be mating behavior. We'll continue to dig for an explanation on this behavior and if we find anything out we'll post it here.

We don't recommend breeding them in the home aquarium because of their large adult size of 12 inches (31 cm). Can you imagine how many gallons of tank you would need to adequately care for all of those growing balas? It can also be fairly difficult to get this fish to breed. Thanks for the question.

Still have questions?
Jump on the forum and ask your question!
Go here: Bala Shark Forum