The Piranha fish is a legendary fish. Known as the Wolf of the Water, these amazingly designed fish hunt as a perfect pack, not normally leaving any chance of escape for their prey.

The fish has developed the perfect anatomy for short, sharp, bursts of speed which coupled with a mouthful of razor sharp teeth, will strip most fish and animals to the bone in next to no time.

OK, so that's the gory bit done. What about the fish themselves? Shapes, colours, shoaling etc.? This fish is amazingly diverse in all of those areas as I will explain. 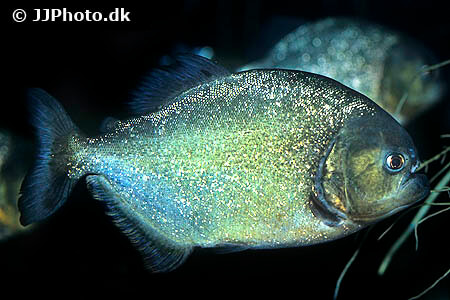 So, how many different types of Piranha are there? Most people would have thought only one thanks to the stories and movies made which gave them the reputation that I described in the first paragraphs. Actually they go into double figures and we are still finding new variants.

As far as the hobby is concerned though, there are probably 9 or 10 different Piranha that are commonly kept. When I say "commonly," the USA has easier access to these fish that are wild caught in South America, and so the hobby is much larger and with more breeds than here in the UK. We are currently trying to change this, and so far I have imported over 70 wild caught Piranha into the UK for an evermore demanding group of Piranha keepers and newcomers.

The main breeds that are kept in home aquaria are as follows:-

Pygocentrus
Nattereri - Commonly known as the "red bellied" Piranha. Is found in various locations in the Amazon. Often seen in Aquarium shops but mostly tank bred.

Caribe - Location is Venezuela. These are fierce fish with similar looks to that of the red belly but have a large black humeral spot behind the gill plate.

Ternetzi - A golden bellied cousin of the red belly from Argentina.

Piraya - Known as the "King" of Piranha, this fish is rare and expensive, coming from the Rio Sao Francisco region of the Amazon. Amazing gold streak up the flanks and probably the most aggressive of the Pygocentrus family. Not a beginner's Piranha!!!!

Serrasalmus
Rhombeus - Commonly known as the "Black" Piranha and famous for its dark markings and evil red eye. These fish can grow to over 18" in length and cannot be kept with other Piranha as they are solitary hunters. An amazing show-piece fish but has to have a large tank. Some variants include the Peruvian high back, Brazilian black, Xingu gold and Diamond.

Brandtii - Well known to be probably the most aggressive of all Piranha, this little devil comes from the same area as P.piraya. Growing to a max of 10", they get a lovely gold/bronze colouring in adulthood. Again, S.brandti must be kept away from other Piranha.

Elongatus - Commonly known as the "Pike" Piranha, this is a streamlined fish that, like the Pike, is built for quick attacks from its hiding place behind sunken trees or vegetation. They come with various face and stomach markings depending on the areas they come from. Again, you may not see them growing much more than 10" and needs to be housed alone.

Spilopleura - This fish comes in two main builds. One known as the "Gold" Spilo and the other being a "Ruby Red" Spilo. A great fish which can be mixed with some fish of the Pygocentrus family, but is extremely aggressive and a fin nipper. I have known one to be introduced into an 8 foot long tank with some huge Caribe, Ternetzi and Nattereri, and within a week had them all cornered and ruled the tank, and it was only 6" long. When I sold it to the guy I thought it would be fish food before the morning... how wrong was I!!!!!!

Geryi - An amazing looking Piranha with a purple line running the entire length of its body from behind the scull to the tail. Can shoal with other Geryi but is also a fin nipper.

Manueli - A very rare Piranha who has similar looks to the P.caribe but a longer snout. Must be kept alone and is very aggressive. This fish can also grow to 16" if in the correct tank.

So now you get a better idea of just some of the Piranha that are living in the Amazonian waters and the different shapes, colours and sizes they come in. But how could you house these kind of fish at home? I have listed the basic essentials below:-

You must be aware that many of the fish I have listed above can grow to some enormous sizes and so your tank should be able to accommodate this. One rule of thumb is 15-20 gallons per fish, but there are a lot of people who say that a large shoal doesn't need so much space. I generally find with my tanks that I can happily keep 5 x 5" Pygos in a 54"x16"x19" for a good amount of time, but as they grow over the 10" mark, then they may need to move.

It is important to give them space but also try to replicate the environment from which they have come. The Amazon is full of tree trunks which they dart in and out of, and general river vegetation. You should try to create a "mini" Amazon when setting up your tank. Piranha are very territorial and will work out their own places in the tank, normally with the largest being the "Alpha" fish and the rest following.

This is a very important area. Due to the diets of these fish, you must have filters that can cope with at least 50% more water volume than your tank actually has, e.g a 50 Imperial Gallon tank should have a filter that can do a 75 Gallon tank. They create a large amount of waste and if you are feeding fish fillets etc., some get lodged behind rocks and wood and will rot. A good power head in the tank is also advisable to provide a steady current of water circulating in the tank, which is similar to natural conditions.

The Amazon is a tropical river so the temperature in the tanks should be similar. I keep mine at around 27-28C constant. The Amazon also has a low pH level, so a healthy level would be anywhere between 6.5 - 7.2. Any higher than 7.5 and you will distress your fish.

Piranha will not just eat anything that is put in front of them. That's not to say they are picky eaters, but they do require food as close to what they have been used to in the wild. The main diet I feed mine is a mixture of whitebait (their fav's), prawns (helps promote healthy colouration), lance fish, smelt, lean chicken slices and trimmed beef heart (can be got very cheap from most butchers). You should always check several hours after their feeding time that all has been eaten. If leftovers start to rot, the Piranha will not touch them and they will affect your water quality. I feed my fish a lot, every 2 days, although you may want to feed them a little everyday

So, if you try to put any of the above into action, you should be able to run a nice Piranha tank. This has been a simple beginners' guide and there is more to it but it will certainly do for your first attempt. Should you have questions or problems I will be happy to help.